A season of democratic disenchantment

A season of democratic disenchantment

The world is in the grip of democratic disenchantment. In North Africa, three dictators have been toppled and democracy, it appears, is around the corner; in Greece and the US, demonstrators—angry at markets—are reasserting the space for “democracy". India—a special case, as always—has gone some distance ahead, and has it seems, escaped these twin extremes.

The upheaval in the three North African cases—Egypt, Tunisia and Libya—has been couched in a democracy Vs. dictatorship frame. In reality, the issues in all three are economic. Youthful populations with few economic opportunities rebelled against dictatorships that ensured stability by distributing largesse along tribal lines, leaving no room for free enterprise, something that ultimately killed the freedom of opportunity. In Greece and the US, it is the “excesses" of markets that are being decried. The greed of those who manned financial markets and the inability of governments to stand up to “capitalism" are being questioned. Never mind that private holders of Greek debt now face a 50% “haircut" and that profligate south European governments are responsible for the present phase of the crisis. 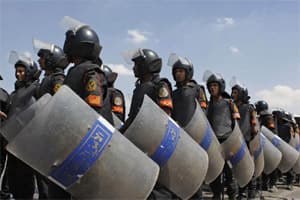 File photo of Egyptian riot police lining up to separate pro-Mubarak supporters and the families of the slain protesters, during the trial session of ousted president Hosni Mubarak in Cairo, Egypt. AP

Yet, this has not prevented commentators and scholars from claiming an inherent conflict between markets and democracies. In a view that has gained currency of late, markets and democracy make an unstable combination and cannot coexist for long without crises—with blame lying more on the side of the markets. Markets, it has been argued, allow for unfettered play of individual rationality that can cause system-wide destruction. Such a system also ignores social needs and ends up being unfair. Democracy, while championing justice and fairness, ends up pushing redistribution of wealth to the point where it leads to an economic crisis. Contradictions emerge from trying to balance the two.

It is not the combination of the two that is unstable; it is the absence of one from the other that creates problems. It is this lapse of memory as it were, that makes such arguments possible. Democracy sans markets is a possibility for sure. But in that case, the role of coordinating exchanges of goods and ideas falls on bureaucrats. Inefficient economic outcomes are guaranteed: India from 1952-1991 is a good example. Yes, one can have democratic politics but prosperity is a far cry. The other extreme, authoritarianism of either variety—Left or Right—again leads to economic disaster. In one case, dictators gobble up almost the entire output (ask Moammar Gadhafi and Hosni Mubarak) or promote crony capitalism; in the other, bureaucrats pave the way to ruin.

Yet what modern life has to understand, and has not understood so far, is that economic institutions—markets and regulators among others—have to be insulated from political impulses. And in turn, politics has its own role and the two ought to be kept apart. The problem does not lie in the fact that markets don’t deliver, it lies in the fact that governments and political parties find interfering in markets for immediate gains too tempting. Mature democracies need to eschew that.

These strands are found in all the protest movements. In North Africa, establishing democracy is only the first step: letting markets function unimpeded is a much more challenging task. More so in societies with sharp tribal boundaries. And markets do take time to create wealth. In Western countries, the approach is from the other extreme, even if it is the governments that were at the root of the present crisis.

In this global churn on the relative place of markets and democracy, where does India fit? After all, it does not face any crisis of the varieties mentioned above. It is a democracy that many believe allows some room for markets and has escaped the so-called contradictions of democratic capitalism. But a closer examination shows that India exhibits all the difficulties of charting a spurious middle-path. Its efforts at redistribution are massive. From cheap oil, food and public employment, the government ends up spending anywhere up to 5-6% of the gross domestic product to that end.

In this aspect, and other “democratic" features, India is well ahead on the road where citizens of Western nations would wish to be. It is another matter that this has led to serious economic problems that are only masked by its pace of growth. In theory, it is easy to argue that redistribution is a part of trying to uphold democratic commitments. In reality, this is best seen as a cost of maintaining democracy in a politically difficult country. India, alone among democracies, has succeeded in engineering a crisis of democratic capitalism.