The lure of finding a median

Like psephologists, equity analysts are prone to herd behaviour.  Often, numbers they generate don’t say much

At a recent alumni reunion, we reminisced about memorable incidents from our days in college. Amongst other episodes, the one that everyone remembered was an assignment on valuation. The class was divided into eight groups and over the next two weeks each group had to independently arrive at a fundamental value of a company.

As was customary on campus, having slept over the assignment for the best part of two weeks, we switched into top gear the night before submission. Gleaning through annual reports and poring over worksheets, each group attempted to arrive at a discounted cash flow based fair value for the company. In the middle of the night, there was a hurried, impromptu meeting of all group representatives to discuss their respective valuations. Not surprisingly, the valuation range was wide, as all of us had used different assumptions for sales growth, operating margins, capital expenditure and cost of capital. 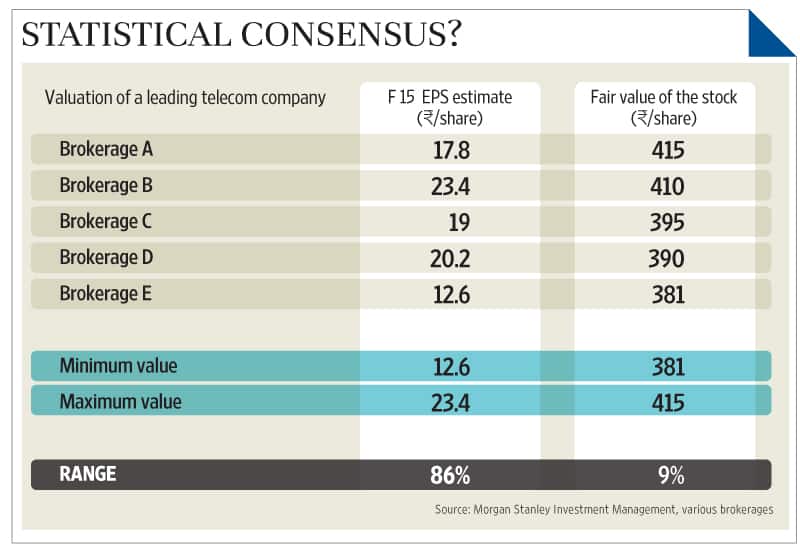 Real life instances of being comfortable in a herd abound. Looking at their valuation assumptions and fair value estimates, we sometimes feel that there is a secret society of stock analysts as well that regularly meets to discuss these things. For example, underlying earnings projection and fair value estimate of a leading telecom company collated from various institutional brokerages reveal that despite the range of earnings per share estimates for next year being quite wide (almost 90% difference between the minimum and maximum value), the fair value estimates for the stock are in a cozy band of less than 10%. Clearly, there are geniuses everywhere.

One of our favourite statistic is the fact that almost every year the consensus starts with an earnings growth expectation of about 15% for the broad market. The actual results have differed materially most of the years and have ranged from minus 16% to 26% but the non-eyebrow raising characteristic of 15% must be what endears it to market strategists. We often don’t realize that we are succumbing to the subtle (and sometimes overt) influence of herd mentality.

It is not only the stock analysts, but investors reading these forecasts who also end up being influenced. In his book, The Little Book of Behavioural Investing, James Montier says that when an analyst first makes a forecast for a company’s earnings two years prior to the actual event, they are on an average wrong by a staggering 94%. Even at a 12-month time horizon, they are wrong by around 45%.

Election forecasters or psephologists are also not immune from the lure of conformity. The sheer vastness of a heterogeneous voting population is compounded by the complexity of vote-share, turnouts, alliances and translating vote shares into seat shares, making forecasting especially difficult. That there could potentially be almost 125 million first-time voters in the upcoming general election adds to the complexity.

Or, consider the problem of being able to translate vote share into seat share. In the 2009 general elections, the Congress won 206 seats with 16.6% of the national vote share. With an almost equal vote share in the 1999 general election, the party managed just 114 seats. Put differently, the Congress had a much more efficient vote to seat ratio in 2009 versus its own history, as well as in comparison to other national parties in that election. It is no wonder that recent election results have thrown out massive surprises versus consensus expectations as shown by equity markets being either limit up (2009) or limit down (2004) on the day following results of the last two general elections.

The idea here is not to deride stock market analysts or election forecasters but to reflect on our obsession with numerical precision in areas that are not pure sciences. Unlike physics or chemistry, investing or psephology do not afford us the luxury of controlled laboratory conditions. One can precisely predict the amount by which mercury will expand when subjected to heat under normal pressure but expecting the same precision in predicting the pace of economic expansion of a country is unreasonable.

As investors, we find ourselves totally out of our depth when clients sometimes ask to us precisely predict the future return of our portfolio and we feel the pressure to come up with a middle of the road number. Actually, the best we can hope for is to identify trends (hopefully, early) and then be able to bet for or against the odds that consensus expectations offer.

It is general election time again and predictions have started flowing in. The current non-eyebrow raising number seems to be 160 seats for the Bharatiya Janata Party and 135 for the Congress, but as we dissect it further for state-wise forecasts for the two parties, the numbers start to vary materially. As poll fever catches on in India, there will be more forecasts, convergence of popular opinion around a number and the inevitable surprise at the outcome.

Swanand Kelkar and Amay Hattangadi are portfolio managers with Morgan Stanley Investment Management. These are their personal views.