Mumbai: The Bharatiya Janata Party’s (BJP’s) victory in Gujarat is being seen as a vindication of the centre’s policies such as the invalidation of high-value notes last December and the introduction of the goods and services tax (GST), which has disrupted business.

Analysts see the party’s victory as a sign of continued political stability and hopes the government will continue its reform agenda. However, a closer-than-expected race in Gujarat, Prime Minister Narendra Modi’s home state, has also prompted concerns that the government might abandon the path of fiscal prudence and be tempted to pursue populist policies in a bid to retain power in the 2019 elections. 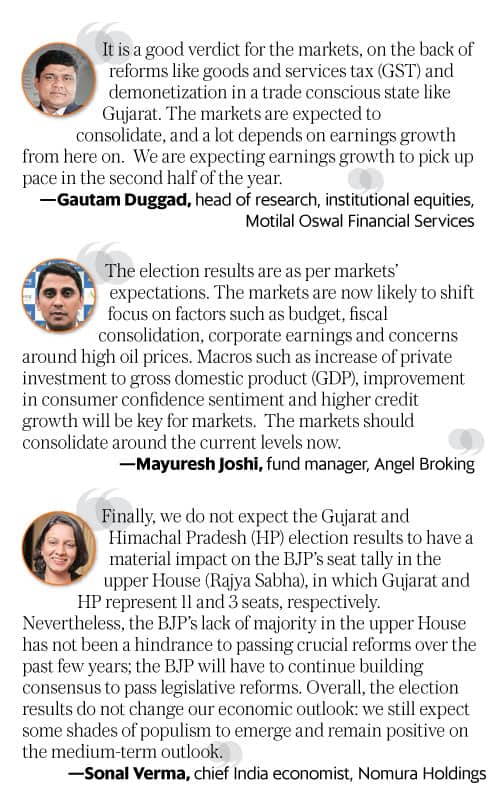 Here’s what the results mean:

For the economy/reforms: The too-close-for-comfort victory in Gujarat for the BJP could mean that the government may pursue populist policies. The upcoming budget in February is the last full budget from the current government before the country heads for general elections in 2019.

“There will be every temptation for the government to try and appease the voters. We believe that while there could be feel-good announcements, the exercise in general would be a fine balancing act," said Jayant Manglik, president of retail sales at Religare Securities Ltd.

What adds to the fears of the upcoming budget being populist is the fact that eight state elections are scheduled in 2018 including Karnataka, Chhattisgarh, Madhya Pradesh and Rajasthan. That could prompt increased spending even at the cost of attracting the censure of rating agencies.

“Hence, even though the BJP is on track to win in both Gujarat and HP, we still expect some shades of populism to emerge," wrote Sonal Varma, chief India economist at Nomura. “We expect an increased focus on rural development (higher minimum support prices and rural infrastructure spending), as well as a larger budget allocation for infrastructure, women and social development schemes."

Secondly, a close victory could similarly mean that the government might not have the stomach to push aggressive reforms.

For business: While the central government might be tempted to go populist over the rest of its term, it will also continue to pursue its anti-corruption and ease of doing business agenda, said analysts.

“If BJP wins in Gujarat, it is a signal that they will stick to their policy trajectory, which includes a reforms, anti-corruption, and fiscal consolidation agenda. All this should be positive for the economy and the stock market in the long run," said Gautam Chhaochharia, head of research at UBS Securities India Pvt. Ltd.

Businessmen concurred. “It is good to have a stable government that will push reforms," said Seshagiri Rao, joint managing director and group chief financial officer at JSW Steel Ltd. “We hope reforms will be accelerated. We think the government will also focus on inclusive growth."

For the markets: The markets have priced in a BJP victory. When early trends showed the party neck-and-neck with the opposition, the markets tanked as much as 2.6% (about 867 points for the Sensex). However, as the ruling party recovered as counting progressed, the markets recovered and the benchmark indices closed about half a percent higher.

Still, the narrow victory margin and possible populism could well keep the upside capped, according to some experts. They also said that the economy and earnings will play a key role now in deciding the markets’ trajectory.

“As most major reforms are already in place, the markets will focus on earnings growth in the year ahead. We are expecting double digit earnings growth next year. We see 12-13% upside to Nifty in 2018," said Pankaj Pandey, research head at ICICI Securities.

Ami Shah and Nasrin Sultana contributed to this story.