Myanmar at the crossroads of global politics

Myanmar at the crossroads of global politics

Myanmar pro-democracy leader Aung San Suu Kyi’s party, the National League for Democracy (NLD), has won a landslide victory in the by-elections, winning at least 40 of the 45 seats being contested. Though the parliament still remains dominated by the military and its allies, who hold the vast majority of the 664 seats, these elections mark the start of a new era in Myanmar.

The tectonic plates of the Indo-Pacific region are shifting and nowhere is this more palpable than in the ongoing transformation in Myanmar. Internal changes of great significance are taking place in this country at a time when geopolitical rivalry between the US and China has attained a sharper edge. 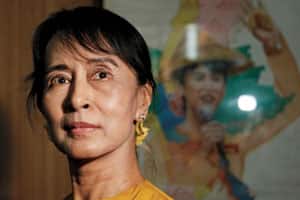 In a landmark visit to Myanmar in December last year, US secretary of state Hillary Clinton signalled categorically that the US priorities are changing, praising “democratic reforms" initiated by President Thein Sein. Washington intends to normalize its ties with Naypyidaw by appointing a new ambassador after almost two decades and by helping Myanmar to join the global mainstream. Myanmar has reciprocated at a number of levels. There has been a significant release of political prisoners, and easing of Internet and press censorship. And now with the NLD participating and winning in the latest by-elections, a gradual normalization of the democratic process in the country seems to have begun.

But what has surprised most observers is the way in which the Myanmar government has dealt with China in recent months. China’s role in Myanmar is critical as its second largest trading partner and biggest source of foreign investment. The armed forces of Myanmar depend largely on Chinese largesse. And the support of China has been crucial in diplomatic fora such as the United Nations Security Council.

The suspension of China-backed $3.6 billion Myitsone dam project, which was expected to provide crucial hydroelectric power to China’s Yunnan province, has certainly upset Beijing’s calculus though it soon recognized that there is no point in upping the ante. China’s growing economic role in Myanmar is not universally popular and historical memory about China’s support to the Communist Party of Burma in the 1960s and 1970s remains a bone of contention. Most of Chinese investment in the resource sector and has failed to produce positive externalities for Myanmar.

Myanmar is reaching out to other powers by promising political reform in order to balance China’s preponderance. In many ways, the recent Western shift on Myanmar is recognition that India’s policy of engaging the military government of Myanmar is the way forward. The US may not be willing to say it in so many words but there is a tacit acceptance of the fact that its policy of isolating Myanmar’s junta had not really been working and, in fact, had let to the reinforcing of the status quo. India, in turn, should welcome this development as a greater Western involvement will lead to a significant curtailment of Chinese inroads into the region. New Delhi, alone, is not enough to balance China’s might in the country. But India will now have to push more vigorously to expand its economic presence in Myanmar before the West starts making its presence felt.

There are new opportunities for India to exploit. Prime Minister Manmohan Singh will be in Myanmar in May to attend the Bay of Bengal Initiative for Multi-Sectoral Technical and Economic Cooperation summit meeting. Myanmar’s strategic and economic importance for India remains vital. India has signalled its interest in joining the mega project for the development of a deep sea port and special economic zone in Dawei, Myanmar, which is being sponsored by Thailand. This project has the potential to have a great impact on the regional economies as well as geopolitics.

Last month, Myanmar was part of a 14-country joint naval exercise with India in the Bay of Bengal aimed at combating piracy and terrorism. The stability of the Malacca Straits remains a key concern for the economies of Asia-Pacific including India and Myanmar. China too, remains worried about the US naval presence in the region and views its trans-Myanmar Shwe pipeline as a possible solution to its Malacca dilemma.

India’s lack of proactive role in exploring and developing gas reserves in Myanmar has marginalized India. India’s economic involvement in Myanmar, largely through the public sector, has not been up to the mark with complaints about implementation delays and quality controls. Now the Indian private sector wants to move in as opportunities expand, but it will have to compete with the Western companies.

Beijing’s influence is not going to disappear overnight. It will fight hard to retain its presence in a country of strategic importance. But India’s Myanmar policy has travelled a long way in just past two years. The US President had criticized Indian policy when he was in India in November 2010. Now, Washington seems to pursuing a trajectory in Myanmar that is similar to India’s. It is for India to take cognizance of the rapid changes taking place in its periphery and find its own unique role and voice.