The future of emerging markets

The future of emerging markets

Emerging markets have grown fast during the past 10 years. They have sustained this growth in the face of substantial financial turbulence in advanced economies during the past 12 months, for three main reasons. 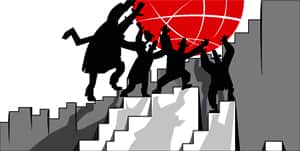 Second, emerging markets have continued to maintain sound economic policies. Unlike during some previous booms, they did not throw fiscal caution to the wind. And problematic behaviour, such as various forms of rent-seeking or corruption, seem to have been controlled much more effectively in this boom compared with past booms.

Third, global trade remains strong and so-called south-south trade (not involving advanced economies) has proved resilient. Countries understand that throwing up trade barriers should be avoided at all costs. The global trading rules have held up so far under considerable pressure. This has been of great benefit to emerging markets.

As a result, over the past year, it is emerging markets that have played a relatively stabilizing role, helping to offset repeated waves of financial concern (and even capital flight from entire classes of securities) in advanced economies. This is a reversal of the usual roles; it is also the first time in recorded history that emerging markets have played such a role.

No good deed goes unpunished, and the same is true for economic policies. It is the resilience of emerging markets that now underpins high commodity prices, including for energy, food, and industrial inputs. This adds an inflationary shock to the mix facing all countries.

There are many good reasons to believe that developed countries can avoid the slowdown in growth and acceleration of inflation that plagued the 1970s. Their economies (and real wages) have become more flexible, and they are able to adjust in the face of higher energy prices. Monetary policy has established greater credibility, and central banks are more focused on controlling inflation, communicating their intentions, and moderating expectations. Exchange rate flexibility, though sometimes a mixed blessing, in general makes it easier to manage the macroeconomy of rich countries.

On all these dimensions, emerging markets are more vulnerable. They may not face stagflation per se — this will depend on their policy responses. But they are certainly at risk of higher inflation.

Some emerging market countries have adopted forms of inflation targeting, in which they explicitly say what they want inflation to be and then back that up by tightening monetary policy as needed — preferably moving early and decisively, rather than waiting until inflation is higher and bigger interest rate moves are required. At the very least, the latest round of commodity price increases is a test for central banks in emerging markets. Many of these banks have become independent over the past two decades. But how much of a difference this will make, we are about to find out.

And then there is exchange rate policy. This is an Achilles heel for some emerging markets: if you tie your exchange rate to the US dollar (the most common form of peg) and you are reasonably open to capital flows, then your interest rates will be roughly those of the US. Think this through: the US Federal Reserve has cut interest rates substantially over the past year to help the US economy as it struggles with problems in the housing market, and the US policy rate is now at 2%. But this is also the interest rate in emerging markets whose currencies are pegged to the dollar. In other words, these emerging markets have eased their monetary policies at the same time as their economies have continued to grow fast — for oil producers, actually faster. This is not a good idea.

The emerging market crises of the 1980s were about high levels of public external debt, unsustainable budget deficits and, in some instances, borderline hyperinflation. The crises of the 1990s and early 2000s were more about private sector borrowing and vulnerabilities created through large current account deficits. Of course, there can always be a crisis of an “old" type; for example, through financing a current account deficit with private capital inflows, and then finding out suddenly that the private investors want to go home. But if there is a new kind of potential crisis lurking for emerging markets, what would that look like?

Most likely it would be centred again on a failure to control inflation, except through raising interest rates late and in dramatic fashion. This might coincide with a broader global slowdown that would affect trade. The danger is that emerging markets could now be perfectly positioned for negative experiences very much akin to those seen in richer countries during the 1970s. Luckily, drastic negative outcomes are avoidable, particularly if key emerging markets act quickly to slow their economies and — most important — move to allow more exchange flexibility, which will allow them to run independent monetary policies appropriate for their own conditions.