When the first fiscal stimulus package came out last month, it was put down as a bonsai package: Rs30,000 crore was not deemed “good enough" to shake the economy. There were lots of opinions on what was good enough—Assocham’s Sajjan Jindal put the figure at around Rs70,000 crore, Confederation of Indian Industry chief and ICICI Bank chief executive K.V. Kamath said a package worth 2% of the GDP—around Rs1 trillion—would have been a “real booster". 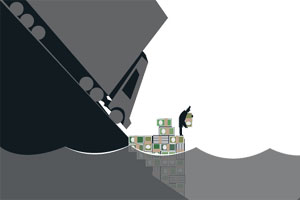 To begin with, as Lorenzo Bini Smaghi of the European Central Bank pointed out, this crisis is different from all other crises since it has hit at confidence, which is the root of a market economy. The biggest contribution the state can make to bring the economy back on track, Smaghi said, is to work towards restoring confidence in the market. This puts a higher responsibility on the government than merely announcing tax cuts and stimulus packages. This also puts a higher responsibility on the shoulders of firms and the markets. Markets, industry and analysts should remember that the government will not only release help in instalments, but more importantly, such measures will not have instant benefits.

Restoring confidence and credibility also means that there has to be much better communication and more coherence from the government. Ahluwalia’s categoric statement that there was no space for any more fiscal stimuli this year was therefore a welcome relief, compared with last month’s waffling. For instance, when commerce minister Kamal Nath, who meant to be reassuring, said, “This will not be a single package. There will be a first package, second and third part of it," he left everyone asking for more. In trying to meet the expectations of the industry and the markets, without any understanding of where we are all headed, the government can end up tying itself in knots, damaging the economy’s long-term growth path. Hopefully, Ahluwalia has put a stop to that.

The key issue here is to keep a sharp eye on the long-term sustainability of the economy and communicate this effectively, thereby subverting the current predominance of the “short term" while making decisions. Behavioural finance research had pointed to this weakness earlier, and in Lewis and Einhorn’s piece in The New York Times, they have emphasized the “tyranny of the short term" once again: “Our financial catastrophe, like Bernard Madoff’s pyramid scheme, required all sorts of important, plugged-in people to sacrifice our collective long-term interests for short-term gain. The pressure to do this in today’s financial markets is immense…" Long-term calculations can have significantly different implications, which is why, for instance, the current race to the bottom in interest rates is not such a welcome move, as V. Anantha Nageswaran has often pointed out in this paper.

In fact, here lies another challenge—the fascination with financial markets, best symbolized by the continuous ticker running across television screens, needs to be broken. This does not mean that the stock market has no value, but we should keep in mind the words of RBI governor D. Subbarao: “Forgotten in the euphoria of financial alchemy is the basic tenet that the financial sector has no standing of its own; it derives its strength and resilience from the real economy. It is the real sector that should drive the financial sector, not the other way round."

That is why the crux of the problem will lie in fixing the underlying issues in the real sector, again with the long term in mind. Textiles, exporters and small and medium enterprises have been suffering for long, even before the slowdown. Are their fundamental concerns being addressed at all?

A long-term focus also means fixing the low level of efficiency in administration and in the public sector. Now that Ahluwalia has moved the emphasis away from the size of the stimulus to the need to improve project implementation, one hopes there will be serious effort on that front. There is a lot to be done—cleaning up the procedures, removing contractual hurdles, improving cross-ministerial interaction and so on. Most importantly, dismantling those leaky pipes of disbursement would go a long way, not just in raising effectiveness of spending, but in raising our ability to achieve better growth.

Stress-buster gurus talk of the need to live in the present, but for today’s stressed-out economy, it is not the “here and now" that matters. It is imperative to focus on where the current measures are taking us; only then will the present lead to a better future.

Sumita Kale is chief economist at Indicus Analytics and can be contacted at sumita@indicus.net. Your comments are welcome at theirview@livemint.com