Home / Opinion / Why does India have few large factories?

Why does India have few large factories?

When Taiwan’s Foxconn Technology Group said it would invest $5 billion to build a new manufacturing facility in Maharashtra, and eventually, set up a dozen new factories to create a million jobs across India, it immediately created a huge splash. Even if a million jobs don’t materialize, the sheer scale of Foxconn’s initial investments is unusual in a country where large factories have become a rarity.

A Mint analysis of data on organized manufacturing employment published by the Annual Survey of Industries (ASI) shows that large factories (or those employing more than 1,000 workers) employ a smaller share of India’s organized industrial workforce today than they did three decades ago. Between 1980-81 and 2011-12, the share of these large factories in total industrial employment fell by 16 percentage points to 28.5%. While the share of small factories (those employing less than 100 workers) has increased only marginally, the share of mid-size factories in total industrial employment has increased significantly over the past three decades, as the chart below shows. 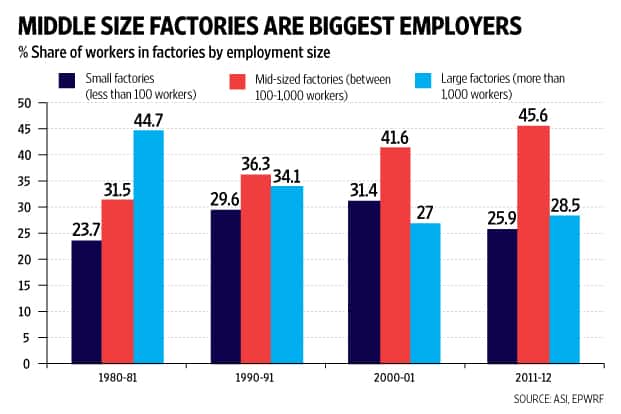 Overall, there has been a decline in the size of factories in India even as the country’s economic growth engine picked up pace over the past three decades. From around 65 in 1970-71, the number of workers per factory came down to around 45 by 2012-13. Barring a few exceptional years, this ratio has fallen steadily over the past three decades, as the chart below shows.

There are significant variations within the Indian industry when it comes to the size of factories. For instance, the textile and apparel industries have seen sharp reversals of fortunes. While textiles manufacturing suffered the biggest decline in the number of workers per factory between 1973-74 and 2012-13, manufacturing of apparel has seen the biggest rise in the same ratio among all major manufacturing sectors.

The decline in the average number of workers employed by Indian factories partly reflects the growing use of outsourcing in the new Indian economy. Earlier, firms used to manufacture most of their requirements in-house, but such vertical integration has become less frequent over the years, said R. Nagaraj, a professor of economics at Indira Gandhi Institute of Development Research.

In a forthcoming paper, Nagaraj refers to the increasing share of middle-size firms in Indian manufacturing as a correction of the problem of “missing middle", a term used by economists such as US-based Anne Krueger to describe the small share of mid-size firms in Indian industry. Nagaraj also cautions against taking the figures for less than 100 workers category at face value. Surveys by economists show that many small firms under-report employment numbers to evade various statutory requirements of registration and provision of social security, he said.

While Indian industry may have got rid of the “missing middle" problem, it still suffers from a scale problem: big factories are far rarer than they used to be. While the share of employment in large factories has gone up marginally over the past decade, it is still much less than what it used to be in the 1980s. Apart from the growing use of outsourcing over the past few decades, the other big change in India’s industrial landscape has been the shift away from labour-intensive manufacturing units to capital-intensive ones. As a result, the job-generating potential of new industrial units is typically lower today than what it used to be. 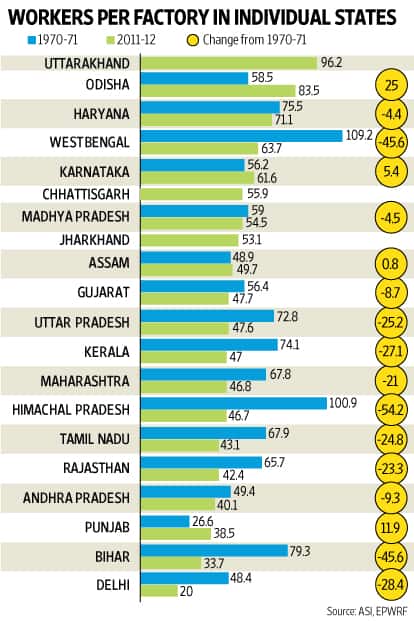 This is the first of a two-part data journalism series on India’s jobs challenge. The second part will examine the spread of factory jobs across Indian states.