Even people who don’t usually watch television couldn’t have missed the overwhelming presence of Anna Hazare’s anti-corruption campaign across all media, especially the Internet. 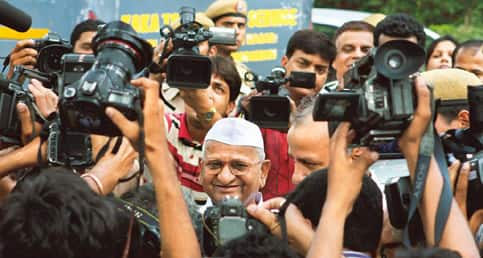 Interestingly, unlike blanket coverage of national events including the Mumbai terror attacks, the Hazare campaign coverage also made for good economics.

To illustrate this point, in the four channels mentioned above, almost 27% of prime time was taken up by advertisements—CNN-IBN and NDTV 24x7 devoted 23%, while it was 30% for Aaj Tak and Star News. Even popular soaps and reality shows lost viewership to the protest, resulting in increased viewership of the news channels.

Perhaps for the first time, most news media (especially television) dropped all pretence of being objective and were part of the cause. The one-sided coverage became part of the story and there were a series of discussions on the media’s role in fanning the protest. Even the parliamentary debates were compelled by this coercive coverage.

While there is nothing wrong in taking sides, especially on a cause like corruption, the loud and outright snub of alternative points of view was condescending. In a democracy, the right to protest and oppose views is critical even in popular movements—the lack of this discourse in the Hazare coverage was alarming.

I have written earlier in praise of news media taking up corruption issues and their potential in raising the current debate on corruption to new levels. However, this overload of media coverage focused around the Hazare campaign hasn’t done much to clarify the issue or empower the common citizen. Yes, it did raise extraordinary attention and promote participation in the protest, but the elephant in the room—corruption and its various forms and nuances—was ignored.

While one can be grateful that for once there was public discussion on policy and policymaking mechanisms, what was worrying were the one-sided arguments and media-led hounding of public institutions and representatives.

As I explained to my 10-year-old, I felt this round of the Hazare campaign mirrored his school experience. Last year, he faced bullying at school; a year later he seems to be reciprocating. After Hazare and his team sensed the power they derived from public support, this time around they arm-twisted Parliament to agree to their demands.

The 74-year-old Hazare’s ability to unite and motivate almost all Indians in his crusade against corruption was admirable. He resonated with the apathetic urban middle class and even the young. For once, the media bandwagon could provide the multiplier role that it failed at, even during the elections.

However, the Hazare hurricane can only be temporary and the sentiment won’t be sustained unless we are vigilant against corruption in our daily lives.