The negative side of falling oil prices for India

With the decline in crude prices adversely affecting the fortunes of oil exporters, there is a risk that remittances from workers abroad will be hit

The recent fall in crude oil prices has been positive for India, which imports most of its energy. It has helped reduce the current account deficit and is a reason for lower inflation. However, with the decline in crude prices impacting the fortunes of oil exporters, there is a risk that remittances from workers abroad will be hit.

This fear is likely to multiply with the International Monetary Fund’s (IMF’s) World Economic Outlook report saying lower oil prices are likely to shave off 2.25 percentage points from the economic growth of energy exporters over the next three years. Here’s how the numbers stack up.

The Middle East is home to a large Indian diaspora and the six Gulf Cooperation Council (GCC) countries—Bahrain, Kuwait, Oman, Qatar, Saudi Arabia and the United Arab Emirates—absorb around 96% of annual labour emigration from India. These countries reportedly account for 60% of India’s cross-border private remittances. 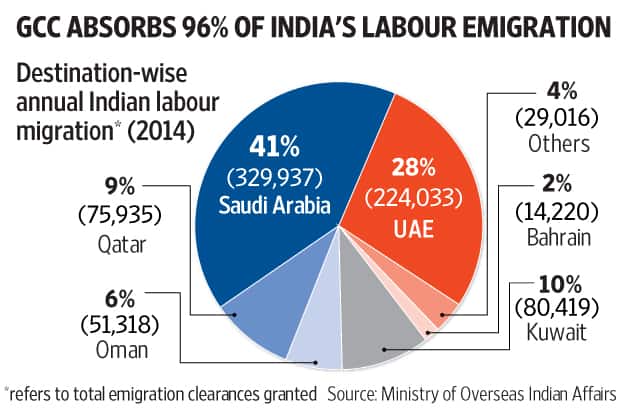 India’s net private remittances amounted to around $65 billion in 2014-15, more than double the current account deficit of around $28 billion. India is the largest recipient of cross-border remittances, ahead of China.

According to a 2014 IMF study, the majority of migrant workers in GCC countries are low-skilled jobs that include construction workers. Predictably, remittances from Indians abroad are correlated with investment demand in the Gulf countries, which includes spending on construction projects. 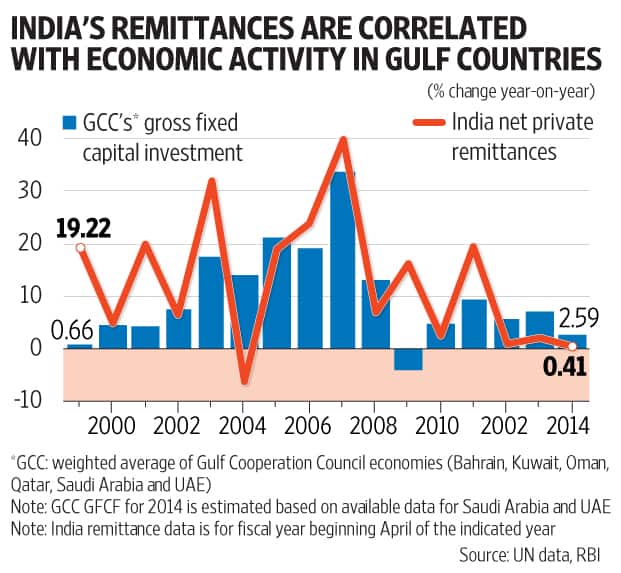 The study says that deterioration in the commodity terms of trade—or the relative price of exported commodities—generally triggers a “strong (adverse) investment response" and lowers potential output. More alarmingly, this slowdown might not just be a temporary cyclical downturn, but a more structural slowdown affecting investment.

The upshot is that a continued slowdown in the Gulf countries can adversely affect the earnings of the Indian diaspora and remittances.

To be sure, an obvious way out for the Gulf countries would be to diversify their economies away from the energy sector. Indeed, officials in Saudi Arabia, the largest of the GCC economies, have been making noises about the need to diversify for a few years now. However, data show there has been relatively no progress with the relatively low share of services (like hospitality, trade, etc.) and manufacturing in these economies.

Secondly, any effort towards diversification would require government support. It is precisely at this moment that the GCC governments will find themselves strained for revenue, given their dependence on oil export-earnings. At the same time, it is true that they do have huge resources at their disposal in the form of foreign exchange reserves and sovereign wealth funds. Whether they use it to accommodate an expansionary fiscal spending in the coming years to support growth remains a million-dollar question. 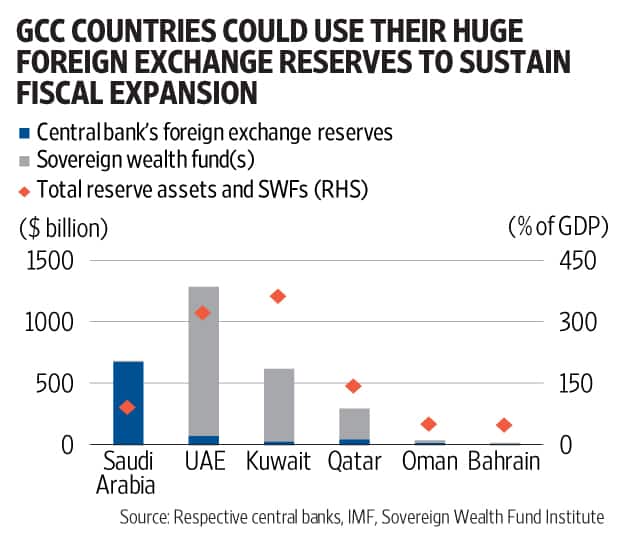