A high level committee submitted its report last month on reforming FCI and has suggested widespread changes in not only FCI, but also in NFSA

Shanta Kumar is no stranger to the issues confronting the Food Corporation of India (FCI). His first brush with the issues of food security and hunger was in November 2000, when as a minister for food and consumer affairs during the first National Democratic Alliance (NDA) government, he set up a high-level committee (HLC) for formulating a long-term grain policy for the country. This was in the wake of high foodgrain stocks in FCI godowns and the Supreme Court interventions in the wake of widespread hunger and malnutrition.

This time he was asked to chair the HLC on reorienting the role and restructuring of FCI by the current NDA government. This committee submitted its report last month suggesting widespread changes in not only FCI, but also in the National Food Security Act, 2013 (NFSA). The committee also shared its wisdom on how to restructure fertilizer subsidy—something which was not even remotely a function of FCI. 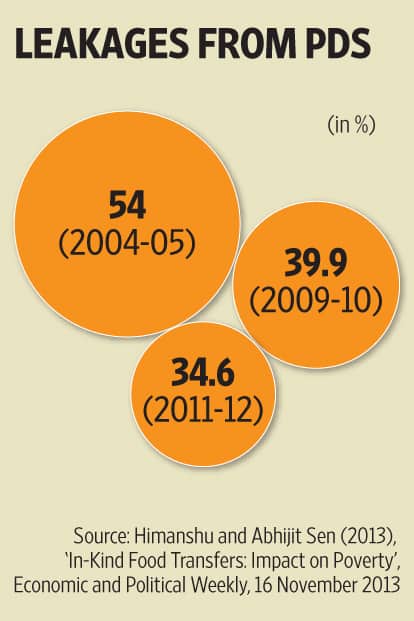 In some ways, the situation—as far as the foodgrain policy is concerned—hasn’t changed much in the last 15 years even though much has changed on the ground. While the government continues to grapple with high food stocks and a leaky public distribution system (PDS), states have moved much further with many not only having reduced leakages in PDS drastically, but the country has also enacted a law which mandates the government to provide subsidized foodgrain to two-thirds of the population as part of NFSA.

It is this change in ground reality that the current HLC has failed to recognize. But this is now so obvious from so many data sources that any attempt to show increased leakages in PDS does not carry any weight. Nonetheless, the committee, ably assisted by one of its members, has gone ahead to cry wolf by wrongly calculating much higher figures of leakages from PDS than any sensible calculation would suggest. So much so that these inflated figures of high leakages are not only inconsistent with other published estimates, but are also at variance with the methodology of calculating leakages for earlier years in the same report. The problems with the committee’s calculations have been clearly exposed by Jean Dreze and Reetika Khera in the current issue of Economic and Political Weekly.

However, it is important to set the facts straight. First, there has been a decline in PDS leakages since 2004-05 when state governments started reforming PDS. Notably, the decline in PDS leakages has occurred in states such as Bihar, Odisha and Chhattisgarh, which are home to the largest number of India’s poor. Second, FCI, despite all its weaknesses, has continued to improve and except for 2004-05, the economic cost of FCI actually turns out to be lower than comparable market prices of foodgrain. Third, PDS has not only contributed to improved outcomes as far as calorie intake is concerned, but has also been instrumental in the significant decline in poverty after 2004-05.

The Global Hunger Report recently released by the International Food Policy Research Institute has re-confirmed the role of PDS in the decline in malnutrition after 2004-05. While this was already known with PDS accounting for roughly one-third of total poverty reduction between 2004-05 and 2011-12, the independent evidence based on a nationwide survey has reiterated the importance of PDS in achieving food security.

The real issue then is not the falsification of numbers, but the approach of this government, which continues to stonewall the implementation of NFSA, even though the original deadline of implementation passed seven months ago. In fact, the only decision in this regard that this government has taken so far is to postpone it, first to 5 October 2014 and then for another six months. States have now been given time until 5 April 2015 to roll out the Act, as against the original deadline of 5 July 2014.

As on date only five states—Haryana, Rajasthan, Punjab, Chhattisgarh and Maharashtra—have reported implementing the food security law and six others—Delhi, Himachal Pradesh, Karnataka, Madhya Pradesh, Chandigarh and Bihar—are in the process of implementing it. Most states have cited the problem with beneficiary identification as the primary obstacle despite the fact that the Act allows the states to devise their own criteria for selection of beneficiaries. It is also important to note that the Socio-Economic Caste Census (SECC), which was supposed to be used for beneficiary identification, has hardly been used for beneficiary identification even in those states where the Act has been implemented. Very few states, except Bihar, have used SECC for identification of beneficiaries. Preliminary evidence on the use of SECC from Bihar suggests that this may be much better than relying on the old below poverty line lists.

SECC, which is a census of the country, collected data on various indicators of household well-being which can be used by state governments to identify the beneficiaries. This data, which was collected by the Registrar General and census commissioner of India (the agency which also collected data on population census), ministry of rural development and ministry of housing and urban poverty alleviation in collaboration with the state governments, is the only credible source of information available for beneficiary identification. However, the lack of enthusiasm by the state governments as well as the central ministries concerned has meant that the draft list is only available for half of the districts of the country.

While the central government has conveniently passed on the blame on the state governments as far as SECC is concerned, there has not been any effort on the part of the central government in implementing other provisions of the Act. The Bharatiya Janata Party government, which used to blame overstocking of foodgrain for the food price inflation while in opposition, has done very little to reduce the public stocks of foodgrain.

The problem is not only the lack of effort on the part of the government in implementing NFSA, but also its political willingness. While the government may find it politically difficult to abandon NFSA altogether, it is silently following the strategy of “benign neglect", something the previous United Progressive Alliance (UPA) government used to weaken the National Rural Employment Guarantee Act. The government’s inaction on this crucial legislation is not only bad for the economy at a time of rural distress, but also bad politics, something which the UPA government learnt the hard way.