Verdict shows electoral performance depends on a mix of vote share, political reading of the situation and alliances

While the jury is out on issues such as how the Bihar assembly elections verdict would impact the forthcoming Parliament session and the government’s larger economic agenda or future relations between Lalu Prasad Yadav and Nitish Kumar, the results do hold answers to some important questions regarding India’s political landscape in recent times.

Q: Are alliances a sure-shot way of winning elections?

The Bharatiya Janata Party (BJP) has attributed its loss in Bihar to the coming together of three parties against it, namely the Janata Dal (United) or JD (U), Rashtriya Janata Dal (RJD) and the Congress that formed the Grand Alliance (GA). In other words, Kumar’s arithmetic has prevailed over Modi’s chemistry. But is this always the case?

Not necessarily. The 2015 Delhi results are the best example. Despite losing the Lok Sabha polls, the Aam Aadmi Party (AAP) went alone in the assembly elections and managed to eat into both Congress and BJP votes.

In Bihar, the Grand Alliance has been able to hold on to its combined vote share in 2014 and 2015 elections. It has suffered a less than one percentage point fall in the 2015 vote share as compared to 2014. The BJP-led National Democratic Alliance (NDA) has suffered more than a five percentage point decline despite adding one more constituent, the Hindustan Awami Morcha, to the 2014 fold. GA has gained in terms of seats, NDA has lost heavily. A: Political arithmetic is subject to changing goalposts.

Q: What is more important for assessing the performance potential of a party—vote share or seat share?

For many, the biggest surprise of this election has been the remarkable comeback of Yadav’s RJD. It has won 80 out the 101 seats it contested. RJD had got just 22 seats of the 168 it contested in the 2010 assembly elections. Is this a miraculous revival? Not really.

In a first past the post system (where the winner is the candidate who receives more votes than others), the relation between vote share and seat share is often erratic. The Bahujan Samaj Party (BSP) had around 19% of the popular vote in Uttar Pradesh (UP) in the 2014 elections. It could not even win a single seat. RJD was a similar case. Despite losing badly in elections, its vote share never went below 18% in the state.

Seat performance of parties with a small but significant share can vary drastically depending on whether they are in a formidable alliance or not. The 1991 and 1993 UP assembly elections are a classic example. The BJP contesting alone increased its vote share from 31.45% to 33%. Its number of seats fell from 221 to 177. The Samajwadi Party, freshly formed out of the Janata Party by Mulayam Singh Yadav, and BSP contested in an alliance to get 176 seats. By increasing its vote share from 9.44% to 11.12%, BSP increased its number of seats from 12 to 67. 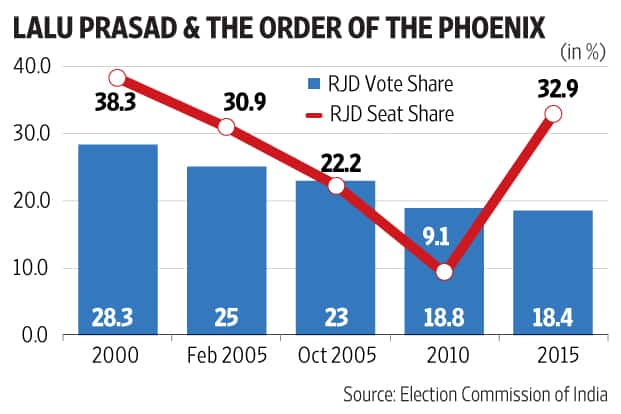 A: Parties with significant vote shares can be written off only at a risk to the commentator. Partnerships matter more in politics than anywhere.

Q: Is the BJP down and out in Bihar?

The BJP has suffered a stark reversal in fortunes in comparison to the 2014 Lok Sabha elections. NDA won 31 out of 40 Lok Sabha seats in 2014. Converting assembly seat wins to Lok Sabha seats in 2015 would give them only 7 seats. Assembly seat leads are down from 172 to 58. The contrast is sharper in terms of victory margins. However, this does not mean that the BJP can be written off in the state. BJP’s vote share of 24.4% in these elections is the highest it has ever got in any assembly election. That said, the results also show even an increase in votes cannot help it in capturing power. BJP’s situation in Bihar today is similar to the one it would have faced after the 1993 Uttar Pradesh elections: an increase in vote share, but fall in seats and loss of power. A: Sometimes, history can put statistics in context. Even though BJP emerged as the single largest party in terms of vote share, the Bihar verdict highlights the party’s vulnerability to an united opposition.