Where are India’s factory jobs?

One of the foremost challenges facing the country today is to generate enough blue-collar jobs for a bulging workforce. The shift from farms to factories that has accompanied the economic transformation of most Asian economies has so far eluded India. But just like everything else, there is wide variation within India when it comes to creating factory jobs. While some states have had a stellar record in generating factory jobs over the past few decades, other states have fared poorly. During the British Raj, manufacturing employment was primarily concentrated in the regions surrounding Bombay, Calcutta and smaller centres such as Madras and Ahmedabad. In 1970-71, Maharashtra, West Bengal, Tamil Nadu and Gujarat were the top four states by share in terms of the number of manufacturing workers. While Tamil Nadu, Maharashtra and Gujarat have retained their place among the top four states, West Bengal fell to the seventh position in 2011-12 from the second spot it enjoyed in 1970-71. Andhra Pradesh has moved up three notches over the past four decades to occupy the third place in terms of industrial employment among all states in 2011-12. As Chart 2 shows, Andhra Pradesh saw the biggest gain in factory employment, followed by Tamil Nadu. West Bengal saw the biggest decline in factory employment, followed by Maharashtra. West Bengal’s predicament in terms of manufacturing jobs can be understood from the fact that it has suffered a 23% decline in the number of manufacturing workers between 1970-71 and 2011-12. Delhi is the only other state to have suffered an absolute decline of around 5% during this period. Delhi’s loss might largely be due to a Supreme Court order that led to the closure of 168 industrial units in 1996. Maharashtra stands out in this group of major Indian states, as it has suffered the second highest fall in industrial employment, yet maintained its position among the top five states.

The differing fortunes of different states cannot be explained fully by varying productivity levels. As the chart below shows, states with high worker productivity are not necessarily those with high, or growing, shares of industrial employment. 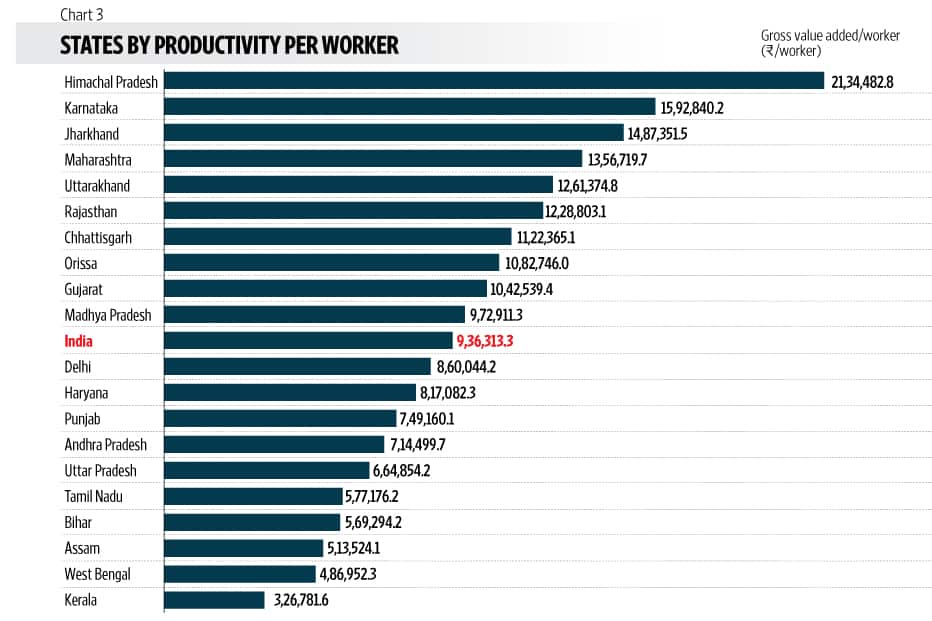 In a forthcoming research paper, Jayan Jose Thomas, assistant professor of economics at the Indian Institute of Technology, Delhi, gives two important reasons for the dominance of southern and western states on India’s manufacturing map. Thomas argues that in the absence of state interventions to facilitate investments, it is in the nature of capital to move towards already developed regions where economies of scale can be reaped. Maharashtra and Gujarat have been the biggest beneficiaries of this phenomenon in India, argues Thomas. Then, the rise of western and southern states is also a result of increased prominence of chemicals and petrochemicals and electronics and computer-related industries, which have flourished in the western and southern regions of the country.

The decline of factory jobs in West Bengal and the spurt in such jobs in states such as Andhra Pradesh and Tamil Nadu partly reflects the different attitudes to businesses in these states, argued renowned development economist Pranab Bardhan in an interview to The Telegraph. West Bengal not only saw a long period of militant trade unionism, but also failed to create an indigenous entrepreneurial class unlike the southern states, argued Bardhan. Caste groups such as the Gounders in Tamil Nadu and the Reddys in Andhra Pradesh that made money in agriculture transformed into late capitalists, setting up large enterprises and factories in the respective states. In contrast, the popular culture in West Bengal remained hostile to businesses, hurting investments and employment, Bardhan said.

This is the second of a two-part data journalism series on India’s jobs challenge. The first part examined the role of large factories in generating factory jobs in the country.