Three red flags from IMF that should worry Indian firms

Mumbai: Indian firms have not recovered from the hangover of a debt-fuelled investment binge in the mid to late 2000s. As domestic slowdown hammered profitability, highly indebted firms found it increasingly difficult to repay loans leading to a deterioration in banks’ asset quality. In its latest country assessment study, the International Monetary Fund (IMF) conducted stress tests on corporate balance sheets and found that their exposure to potential shocks continued to increase. Here are three charts from the report that show the weak footing of Indian firms.

1. Leverage of Indian firms is among the weakest in emerging markets One of the biggest boosts to India’s economic growth in the mid to late noughties came from investment demand. This was primarily funded by bank credit, even to infrastructure companies. In the aftermath of the equity bust following the global financial crisis, firms couldn’t raise money from new share issuances. Instead, they relied increasingly on foreign borrowings; that also makes them vulnerable to external shocks. At the end of the last financial year, the top quartile of the most leveraged firms had a debt-equity ratio of 149%, the highest among big emerging markets. Infrastructure and metal firms account for almost half the debt of Indian firms, says the IMF. They are also the ones most under the cosh, owing to stalled projects and declining commodity prices. Leverage for firms in these industries is in the range of 134-240% compared to 52-107% for other sectors. Delay in project approvals, land acquisition problems, fuel scarcity, two years of droughts, weak domestic and export demand, excess capacity, high interest rates: it’s a long laundry list of issues facing Indian companies since the financial crisis of 2008. These have dented profitability severely. The median return on assets (RoA) for Indian firms in fiscal 2015 was 4.6%, the lowest in a decade, says the IMF. Things are also not expected to get better in a hurry as many of these issues such as excess capacity still persist and recent guidance from firms after their December quarter earnings show.

3. Stress tests show that vulnerability to shocks is high 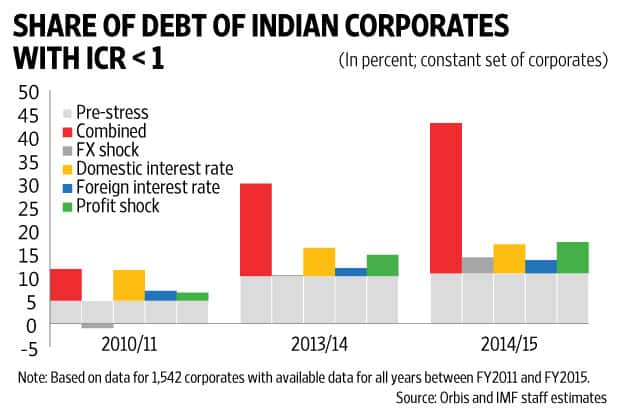 Poor earnings means that the capacity of firms to repay debt has fallen alarmingly. According to the IMF, corporate debt-at-risk, or the share of debt owed by firms with an interest coverage ratio below one, increased to 10.8% in fiscal 2015. The IMF’s stress test shows that under extreme adverse shocks—such as an increase of 50 basis points (bps) in domestic interest rates; a 400 bps increase in foreign interest rates; and 29% depreciation—corporate debt-at-risk could rise up to as high as 42%. Heavy foreign borrowings have also increased corporate vulnerability. More importantly, the stress test shows that “corporate sector risks continue to be considerably higher than in the aftermath of the Global Financial Crisis". That, more than anything, should be a warning sign about the incapacitated financial condition of Indian firms.