Hyderabad has always seemed to be India’s most integrated city. Hindus and Muslims for the most part have lived next to and with each other in harmony throughout the city over the years. We are used to celebrating each other’s festivals, feasting on each other’s food and remaining family friends for life over generations.

Growing up in Hyderabad, one always assumed that the rest of India was the same. But it is not. Curiously, the segregation between the two communities in the rest of India is also carried over to the US where in addition to the fact that most desis do not mingle with the locals, the Hindus mixed with Hindus, and the Indian Muslims seem to have no choice but to hang out with the Pakistanis. Of course there is the further division amidst the Hindus where the Gujaratis stick to their own and so do the Tamilians, Keralites, Maharashtrians etc … 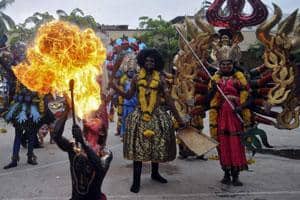 A performer blows fire from his mouth as he performs during the annual Hindu religious festival of Bonalu in the southern Indian city of Hyderabad. (Reuters)

In his recent essay, Muslims in India: The Sense of a Community, in Outlook magazine, Christophe Jaffrelot, the co-editor of the book Muslims in Indian Cities: Trajectories of Marginalisation, sheds light on some interesting statistics all taken from the 2001 census. While India’s urbanization rate is below 28%, 35.7% Muslims live in towns and cities and thus are the most urbanized with the exception of Parsis and Jews. However, Muslims also appear to be on the verge of marginalization in most cities and towns.

Jaffrelot states that in preparation for the book a team of 12 Indian and French researchers analyzed the situation of the Muslim populations of 10 Indian cities: Ahmedabad, Aligarh, Bangalore, Calicut, Cuttack, Delhi, Hyderabad, Jaipur, Lucknow and Mumbai.

Of these cities, Hyderabad emerges as having the most Muslims living in the city at 41.17%. The next is Calicut at 37.5%. Cuttack is the lowest with 5.2%. With such a high concentration of Muslims in Hyderabad: it is no surprise then that it appears to be the most the integrated city in India. This integration also transcends borders and in different corners of the world, the delight of meeting a fellow Hyderabadi is exquisite. Hindu or Muslim. The dinner invitations happen instantly. The love of Hyderabadi food and all the heavenly delights that make a full Hyderabadi dinner unite the communities’ generation after generation.

And once a year, come Ramzaan time, its haleem that takes the cake. Hyderabadi haleem is the world’s best food. When cooked to perfection, haleem delivers you to a place of satisfaction that is unmatched by any other food. The heavenly gruel used to be dished out across the twin cities in hundreds of outlets for 30 days of bliss. However, over the last couple years some of the more popular outlets have been making haleem a few days ahead of Ramzaan. This year, many outlets starting selling haleem a couple weeks before Ramzaan to allow Hindus to enjoy the treat before the month of Shravan begins when non-vegetarian food is not consumed by them.

Some view the business of haleem which is pegged at around ₹ 100 crore, to be taking on an air of gluttony and greed at a time when Muslims are observing a month of austerity, sacrifice and discipline. But almost everyone else is happy with the situation. One entrepreneurial friend has embarked on a venture to introduce the divine delicacy to the denizens of Chennai. Hyderabadis are making their way to the various outlets that have appeared overnight to sample the scrumptious treat and find a favorite one to return to. My Uncle visiting from Minneapolis is awestruck by the roaring haleem business and the crowds thronging every outlet.

Now if we could only get Tirupati laddoos as easily, the most heavenly meal will happen. A plate of Ramzaan haleem followed by a Tirupati laddoo. The best of both worlds.