Of all states of India, its smallest in terms of population of barely 610,000, Sikkim, stands out as among the bigger successes in both socioeconomic and economic domains.

Per capita gross domestic product (GDP) has been growing in the double digits since 2004-05, while the average annual growth in similar sized northeastern states has been merely 5% or thereabouts. While it is true that the income distribution pattern determines the extent to which growth translates into better well-being, the socioeconomic indicators of Sikkim suggest that the growing income of Sikkim has translated into improved human development parameters on a grand scale. 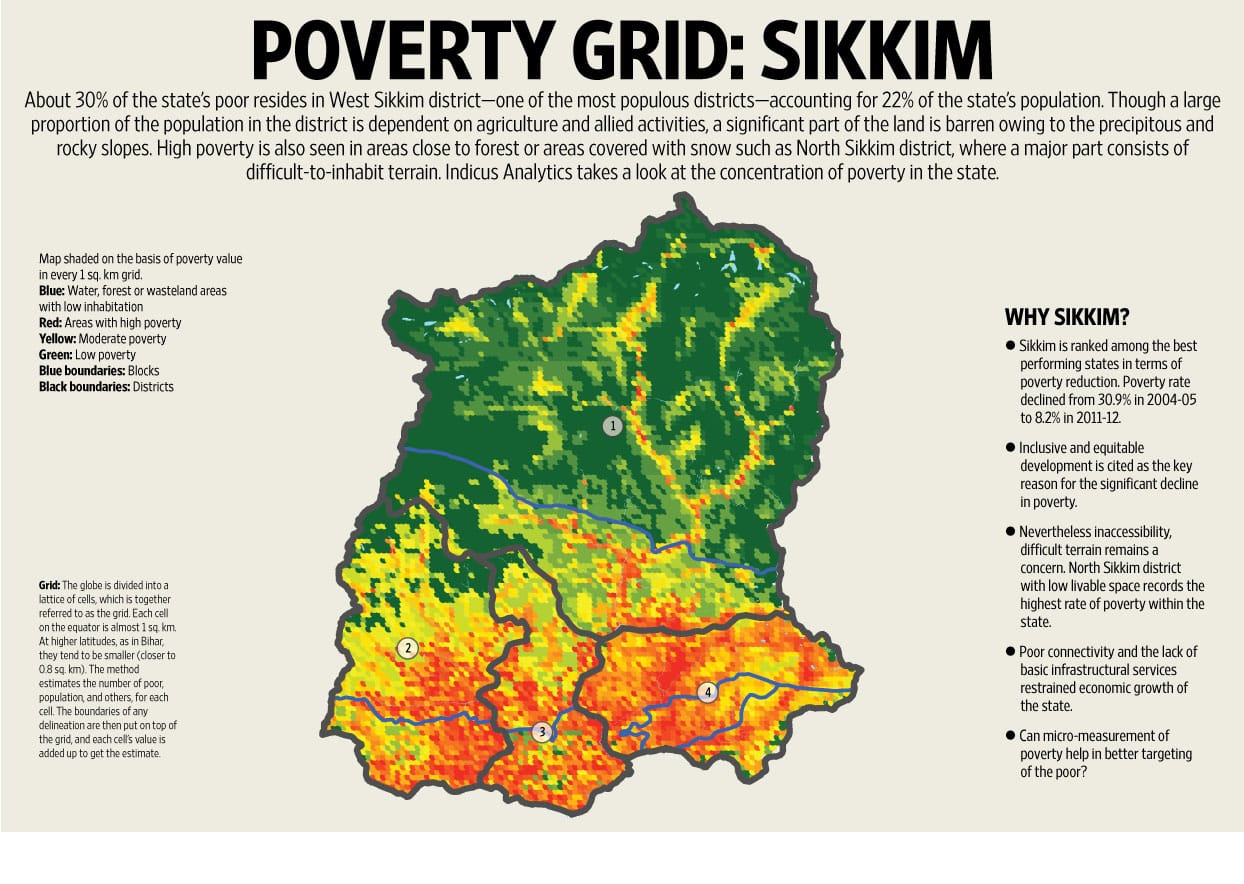 Sikkim’s manufacturing and mining sectors have grown dramatically since 2004-05. Most of the industrial centres are concentrated in East Sikkim and South Sikkim districts. This was backed by an improved availability of electricity, and would also have supported the double-digit growth in service sectors, if not outrightly caused it. Improvement in tourism also contributed. Even more interestingly, the growth has been relatively well-spread, with all parts of the state growing rapidly.

Clearly, the rising economic opportunity in these districts is one of the key reasons for the decline in poverty rate. Spatial data analysis suggests far more superior connectivity through road network and transportation services in the two districts of east and south Sikkim, compared with north Sikkim and west Sikkim. This is one unique facet of poverty reduction in Sikkim. Of the remaining 8% poor, about one-third of the poor population in the state resides in East Sikkim district, the most populous (accounting for 46% of state population) and one of the most progressive districts in the region. The continued economic expansion of the district brings forth hope of further poverty alleviation in the state in the near future.

Though agriculture growth has not been as high (it is the prime economic activity of the state), there have been improvements there as well. Sikkim being a hilly state, agricultural practices are highly variable in time and space due to varying altitudes and agro-climatic conditions. The surveyed arable land in Sikkim is about 109,000 hectares (ha), accounting for 15.4% of the total geographical area. Our spatial analysis suggests poverty rate is low in areas where large parts of the area are fertile or under agricultural cropland, whereas a high concentration of rural poverty can be seen near barren or infertile land. Environmental degradation—by adversely effecting soil fertility, quality of water, forests, wildlife and fisheries—is a major factor in perpetuating poverty in most of the hilly areas. The dependence of rural poor, particularly the tribal societies, on natural resources is self-evident. People being directly involved in collecting items of food from nature are more vulnerable to the adverse impacts of degradation of natural resources.

About 30% of the state’s poor resides in West Sikkim district—one of the most populous districts—accounting for 22% of the state’s population. Though a large proportion of the population in the district is dependent on agriculture and allied activities, a significant part of the land is barren owing to the precipitous and rocky slopes. Further, poor road conditions due to frequent landslides have limited economic growth of this region. 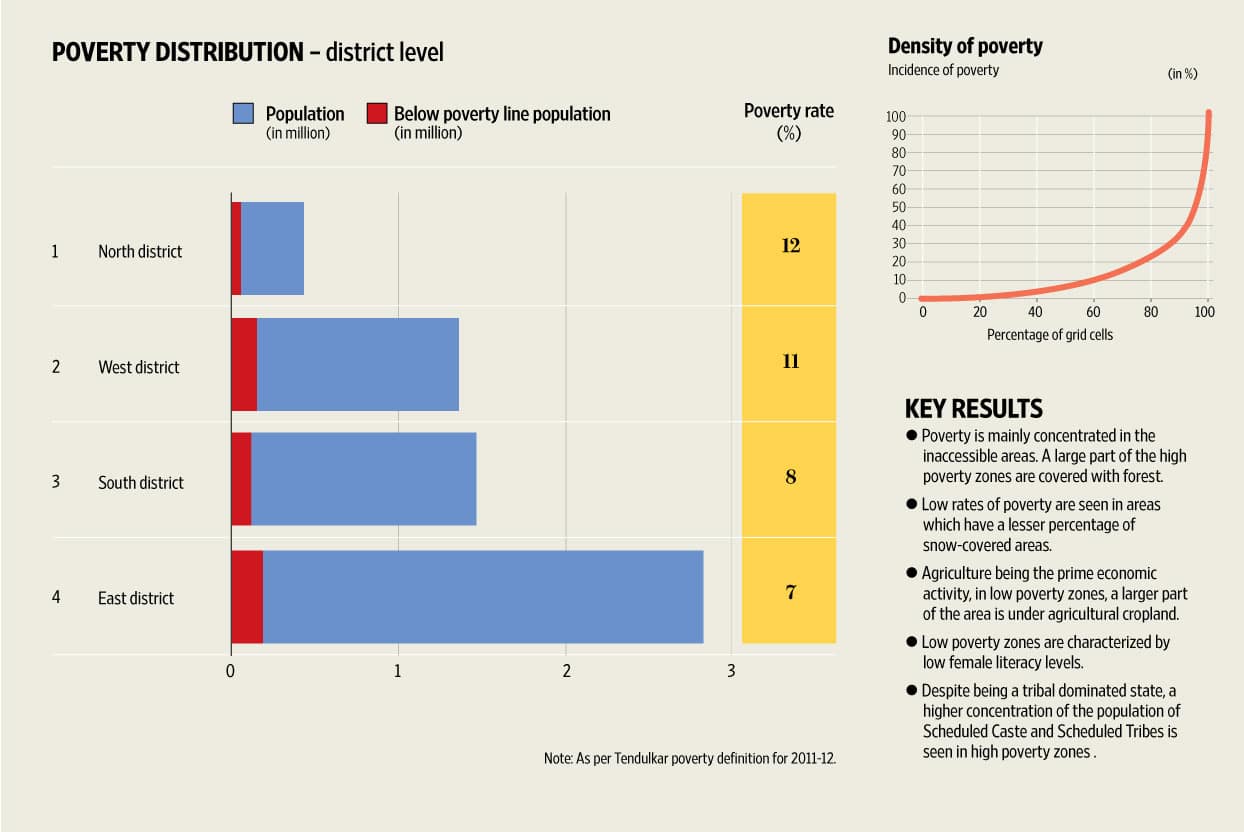 Another cause of concern from the socioeconomic development perspective is inaccessibility of certain areas. High poverty rate is seen in areas close to forest or areas covered with snow. This particularly affects North Sikkim district, where a major part consists of difficult-to-inhabit terrain. This acts as a constraint on expanding economic opportunities in this region, and the resultant gap in jobs, education and other socioeconomic parameters has resulted in persistent poverty in the northern part of the state.

Sikkim’s experiences provide some insights for the country as a whole. It’s a small state both in terms of population and geographical expanse and it has high levels of homogeneity, which helps in the formulation and implementation of policies. And it has seen all-round growth—not focused on large cities but even in rural areas. However, despite all of this, there is some poverty persistence, and this tends to be in hard-to-reach hinterlands, and near forest areas.

The concept of spatial poverty that can be identified and measured via remote sensing allows us a far greater set of policy insights. The most important being that we are able to link poverty with the environment that gives rise to it and sustains it. These are the personal views of the authors and do not reflect those of the organizations with which they are affiliated.