Views | May Day and the plight of the average Indian worker

Views | May Day and the plight of the average Indian worker

The first of May, celebrated as international workers day each year only serves to underscore its irrelevance for nine out of ten workers in India, who work in the unorganized sector and almost by definition, lack any protection such as maternity benefits or provident funds. 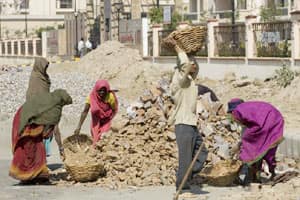 A civil society movement under the umbrella of the so-called ‘pension parishad’ will hold demonstrations in the capital next week in support of demands for universal pensions for the unorganized sector. Given that influential advisors to the United Progressive Alliance (UPA) such as Aruna Roy, Jean Dreze and Nikhil Dey are backing the movement, it is fair to expect the government to pay heed. Quite possibly, universal pensions will be timed with the next general elections.

Undoubtedly, universalizing pensions will attract the criticism of pandering to populism at a time when the nation’s fiscal balance is tottering. Such a move, in itself will do little to generate employment or enlarge the size of the organized sector. Yet over the long term, policies for universal pensions and access to healthcare will help create a social safety net that can probably make it easier to push through labour reforms.

The absence of a social safety net for the unorganized sector has been the biggest deterrent to introduce a simplified and flexible labour law regime so far. The fear that organized workers might face the double trauma of joblessness and scant social security has made it difficult for political parties, who risk alienating a privileged and vocal minority, to support labour reforms. Consequently, there is little attempt to replace arcane labour laws that are unfriendly both to workers and employers, with simpler laws.

The move to universalize pensions can be a part of a broader process that bridges the gap between the organized and unorganized sector and lays the initial conditions for labour reforms. As political economist Pranab Bardhan points out in his writings, labour reforms are most likely to succeed when introduced as a package deal that promises wider social safety and unemployment assistance while offering more flexibility to employers. Such a deal will herald a real May Day for Indian workers.

No Indian politician has yet gathered the courage or imagination to introduce such a package deal. The benefits to the economy will be considerable but the past record of the current regime at least does not inspire much hope.