Institutional deliveries have risen, but other indicators of motherhood intervention haven't fared so well

At 140 deaths of mothers per 100,000 live births, India is far from achieving the UN millennium development goal of reducing the maternal mortality ratio (MMR) to 109 this year. This is despite the government rolling out programmes such as the Janani Suraksha Yojana (JSY), one of the world’s largest conditional cash transfer schemes.

A comparison of data from the National Family Health Survey 3 (NFHS) carried out in 2005-06 and the recently released Rapid Survey on Children (RSOC) conducted in 2013-14 enables us to measure the efficacy of this scheme. 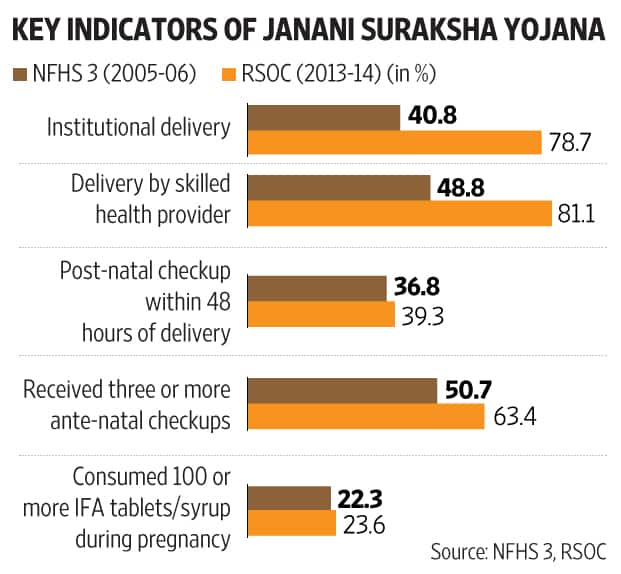 However, other health indicators have not fared half as well.

The percentage of women benefiting from post-natal checkups within 48 hours of delivery has increased by only 2.5 percentage points. The proportion of pregnant women consuming iron and folic acid tablets/syrup (IFA) for at least 100 days is little changed, according to the government’s version of the RSOC data. An earlier report leaked by The Economist showed that this indicator had actually fallen by 7 percentage points.

Crucially, a minimum of three antenatal visits is very important to monitor the health of a pregnant mother. While this yardstick shows a 13 percentage point improvement at the national level, in many states, it has actually worsened.

Why has this happened?

The answer may lie in the programme’s structural shortcomings. The JSY’s implementation hinges on the performance of so-called Accredited Social Health Activists or ASHAs, who receive cash to track pregnant women and bring them to government or private accredited healthcare centres for delivery.

Regardless of whether the ASHA had scheduled antenatal visits, the woman gets the bulk of the payment once the child is delivered in an institutional setting. A smaller portion of cash is released after the ASHA completes a post-natal visit, but given the effort required to locate the mother, cost of travel, and others, it’s likely that ASHAs chose not to focus on this.

It is the very incentive structure of the JSY that is responsible for the lack of progress of other indicators, find Shareen Joshi and Anusuya Sivaram, two researchers at Georgetown University, who analysed District Level Health Survey data. They argue that the scheme is not reaching the poorest women.

Others such as Aparajita Gogoi, national coordinator of the White Ribbon Alliance, a coalition of civil society organisations, say that a lack of sufficient infrastructure and cultural mores play a role in the lack of progress.

They argue that health facilities are not moving at the same pace to cope with a sudden spurt in demand for institutional deliveries due to JSY. That, Gogoi point outs, could be preventing an improvement in post-natal care. States also suffer from chronic shortage of IFA.

“Pregnant women are registered with the ANM while they are in their marital home. But post-delivery, they move to their parental home. Cultural taboos, which dictate that a newborn and the mother must be isolated for the first one month after birth, also prove a roadblock in post-natal care," said Gogoi.

The JSY also gives money to mothers for institutional delivery (the amount varies from ₹ 600-1,400). All women above the age of 19 from scheduled caste (SC) and scheduled tribe (ST) communities as well as women living below the poverty line (BPL) are eligible for this, while in low-performing states (states with poor health indicators: Uttar Pradesh, Uttarakhand, Bihar, Jharkhand, Madhya Pradesh, Chhattisgarh, Assam, and Jammu and Kashmir) all women are eligible for the benefits.

That has resulted in widespread variation in the implementation of the programme across states. In Delhi and Punjab, for instance, only 20.4% and 38% women, respectively, availed of this scheme, while the number is as high as 66% in Madhya Pradesh. 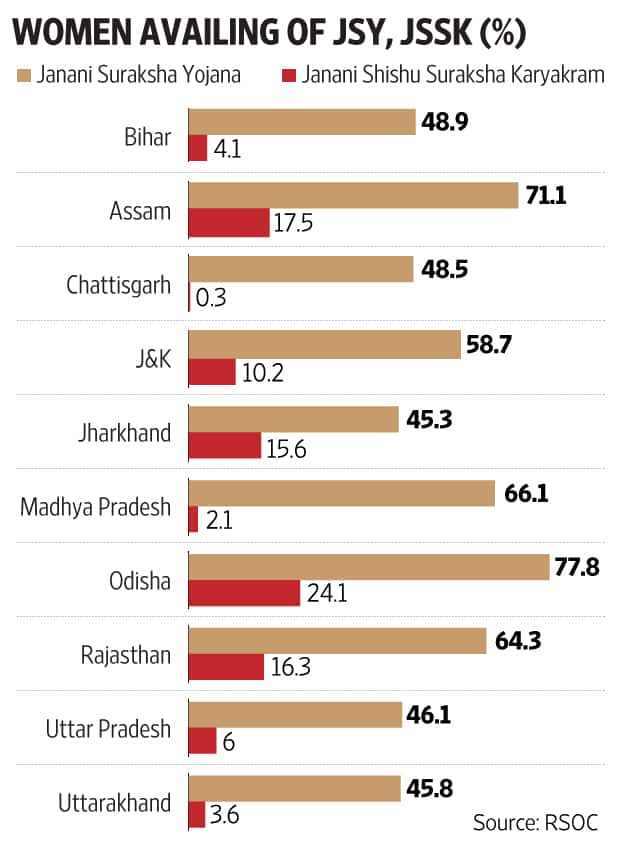 “The monetary layout is higher in low performing states where all pregnant women qualify for the scheme. In urban areas, only women above the age of 19 and who are either SC, ST, or BPL, qualify. The money the mother receives is also much less in high-performing states and in urban areas, which may also affect the decision of a mother to avail JSY," said Ambrish Dongre, a researcher at the Centre for Policy Research. 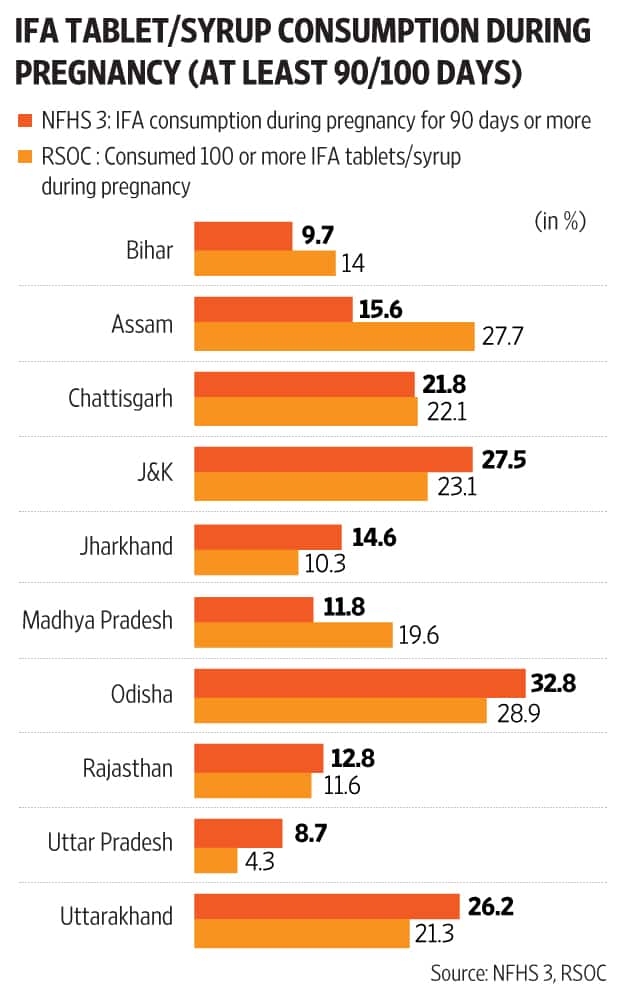 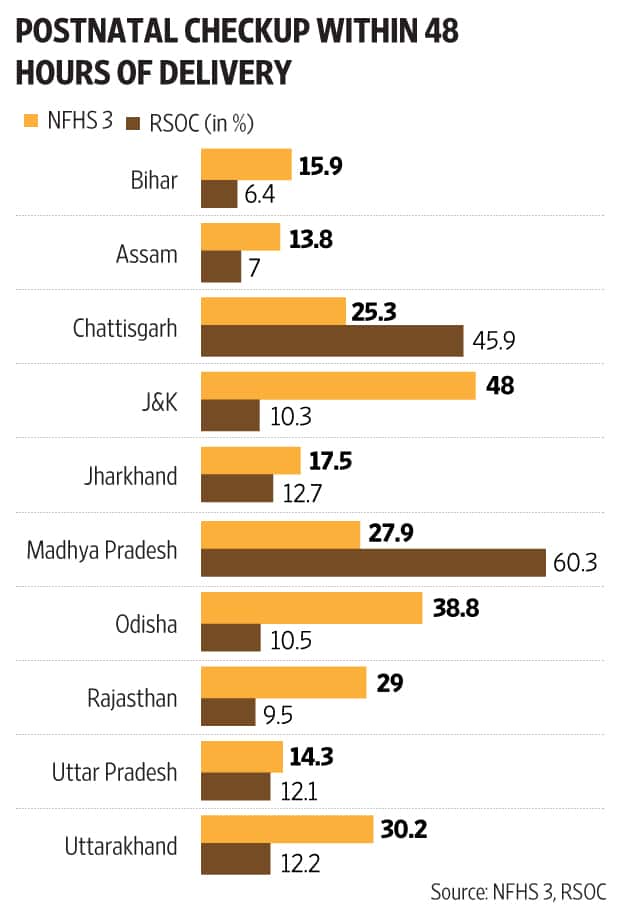 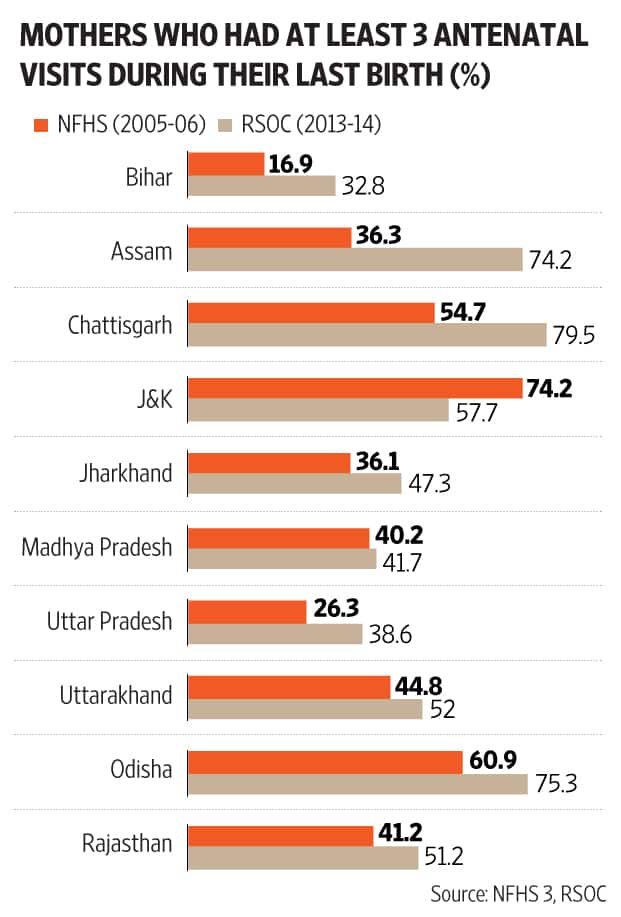 It’s perhaps to tackle these shortcomings that the government rolled out another scheme to support the JSY in 2011. Called the Janani Shishu Suraksha Karyakram (JSSK), it offers transport for pregnant women to reach health centres and back home, medicines, C-sections, care for sick newborns, food during hospital stay, and so on, all free of cost. However, the RSOC data shows that the scheme has hardly seen any uptake since its introduction in 2011. At 32.2%, Tamil Nadu has the highest percentage of women availing of the scheme.

Researchers say the poor uptake may be due to a lack of pressure from the authorities, inadequate monitoring, as well as a lack of incentives for people implementing it on the ground. 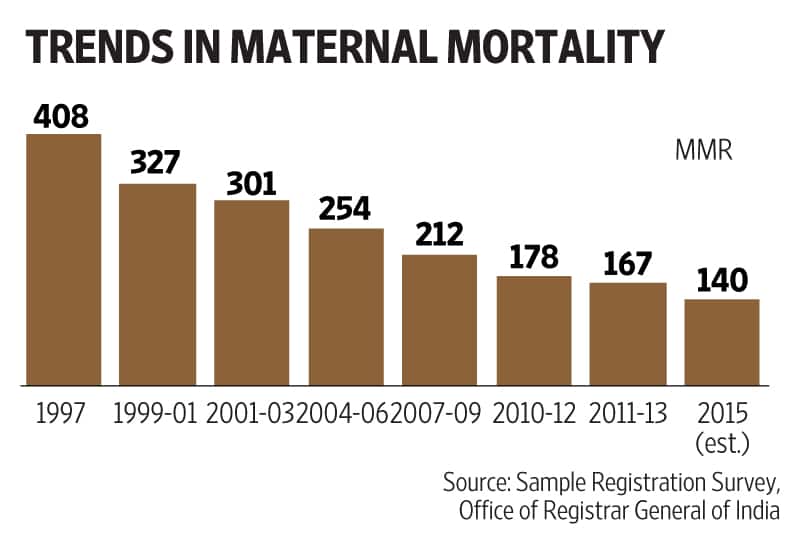 In the final analysis, researchers are still loath to draw any conclusions on JSY’s impact on maternal mortality.

Dongre, for instance, argues that from the existing data, it is not possible to draw such a conclusion because the maternal mortality rate had already shown a declining trend even before the introduction of the JSY. Moreover, there is again widespread variation among states with some such as Kerala, Maharashtra and Karnataka on track to achieve the 109 MMR target, while others such as Assam, Bihar and Chhattisgarh are far from that.