Census 2011 data shows that for every five persons aged above 60 years, more than two are still working

New Delhi: Much is made of India’s demographic dividend of an overwhelming proportion of youth in its population, but rarely do people talk about its senior citizens. Although the percentage share of people aged above 60 years is only 8.6%, in absolute terms, they constitute more than 10.4 crore persons. That’s almost three times the total population of Canada.

For many of them, crossing 60 years doesn’t automatically guarantee retirement from work. Census 2011 data shows that for every five persons aged above 60 years, more than two are still working. There is a significant gender gap on this count. For males, the ratio is more than three in five, while it is a little over one in five for females. There is also a sizeable difference in the status of senior citizens in rural and urban areas. In rural areas, 47% of those aged above 60 years are still working. The share drops sharply to 28% in urban areas. 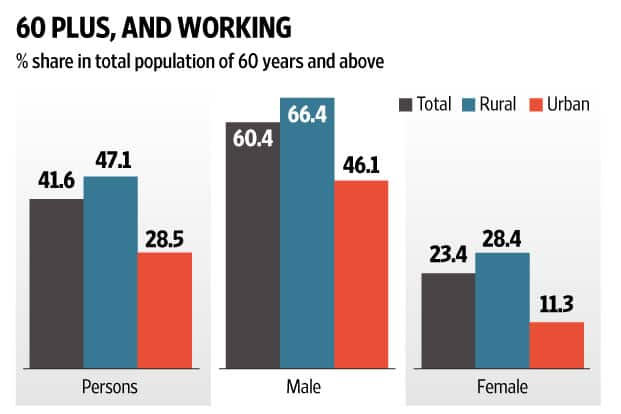 To be sure, the share of working population declines with higher age groups. In addition to the 60-plus category, the Census gives data on 60-69, 70-79 and 80-plus categories. As expected, the 60-69 age group has the highest share. However, what is surprising, and perhaps worrying as well, is the fact that more than one in five persons aged above 80 years is still working to make ends meet. Among men, the ratio is more than one in three. To arrive at the estimate of working population for a given age group, the categories of main workers and marginal workers have been added together. According to the definition used in the census, main workers are those who have worked for majority of the year (more than six months), while marginal workers are those who worked for less than six months in a given year. The difference is not just on account of willingness to work, it is also suggestive of the fact that those in the marginal category might not be able to find enough work to qualify as main workers. The share of those seeking work among total marginal workers in the country was more than 46%. For persons aged 60 years and above, this figure was more than 27%.

What about those who are not working?

Among non-workers, the Census lists seven different categories: students, household duties, dependants, pensioners, rentiers, beggars and vagrants, and others. Among these, pensioners and rentiers can be taken as those having some sort of economic security when they retire, while those who fall under the dependant and household duties category can be taken as ones without any post-retirement economic security.

At the all-India level, more than two in every five persons aged above 60 years belong to the dependants and household workers category. These ratios vary drastically across gender: less than one in five for men, and around two in three for women. Urban areas have a slightly higher prevalence of dependency than rural ones. The ratio increases with an increase in age as shown in the chart below. 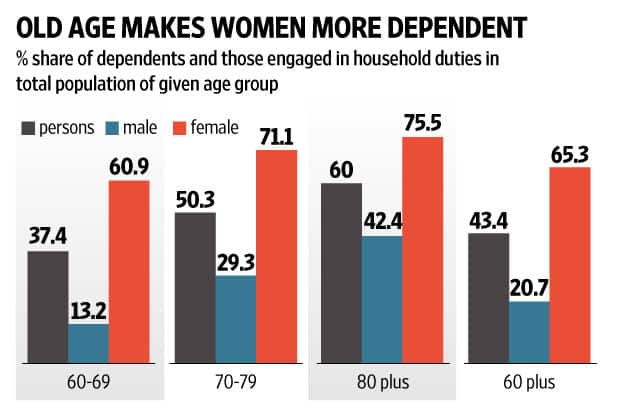 Around one in 10 persons aged 60 years and above in India have a pension or rent income. Once again, urban senior folk are better off. Those receiving a pension or rent incomes constitute more than 17% of the population aged 60 years and above. The figure is less than 9% in rural areas. Among those who have post-retirement incomes, the gender gap is much higher in urban areas than rural areas. The former has a gap of more than 15 percentage points, while it is just over one percentage point for the latter. To be sure, these categories tell us little about the actual earnings of our senior citizens. It also does not say whether they stay with their families or alone, which can have a significant impact on expenses. According to a survey conducted by the National Sample Survey Organisation (NSSO) in 2004, less than 20% of aged men and around half of aged women were living with their children.

While a lot more data is required to ascertain how economically secure our senior citizens are, it can be safely said that very few among them have access to a remunerative retired life. Also, increasing incidence of informal employment, which carries little in terms of social security or retirement benefits, would not contribute towards a future where retirement would be something to look forward to.