Home >opinion >online-views >Views | An agenda for privatization of education?

Views | An agenda for privatization of education?

Views | An agenda for privatization of education?

A lot of hope rested on the 12th Five Year Plan. It was pitched as a peoples’ plan with inclusion as its byword. There was hope that it would finally allot sufficient resources for implementing the Right to Education (RTE) Act and correct the historic neglect of the education sector. After all, the passage of the RTE Act itself took a 100 years with the legislation mired in the reluctance to invest commensurate with the scale of the problem. The coming plan period will be the deadlines to ensure that basic infrastructure is available in schools (2013) and that all teachers are trained (2015). The next plan is critical since several of the deadlines have so far been missed. Eight states, including the capital, Delhi, not yet as much as notified the rules necessary for its implementation. 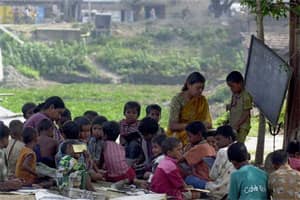 A resolution to these problems is unfortunately not reflected in the approach paper. To be fair, there are positive features. The intent to universalize secondary education by 2017 is welcome. The emphasis on teacher education is long overdue. Addition of physical education, games and sports in schools backed by adequate infrastructure in elementary education should ensure a more congenial environment. The intent to strengthen the monitoring and evaluation mechanisms whereby social audit for Sarva Shiksha Abhiyan (SSA) and mid-day meals (MDMs) with web-based monitoring for transparency and periodic and sustained third-party evaluations can be a critical positive feature, if implemented properly.

Having said that, there are several critical concerns. Cutting across much of the document is the assumption that resource gaps even in elementary education would continue and need to be met through private investment. This assumption in a time of 9% growth and in the face of a constitutional mandate to ensure universalization of education is difficult to comprehend. After all, given that the state is legally bound to ensure provision of the RTE to every child up to the age of 14 years, it is likewise bound to find the resources for the same. It is also not as if the amounts involved are so terribly huge. As a simple comparison, the funds lost to the national exchequer through the 2G scam equal the total amount needed for the Act’s implementation. Allocating a minimum 6% of the gross domestic product (GDP) for education is a long standing commitment reiterated in every government education policy and manifesto but looks to be on the way to remaining unfulfilled. Given the multitude of issues for which the government does manage to find resources, it is not that it cannot educate its young citizens; it simply does not consider it high enough priority.

This reluctance to invest in education leads to remedy of entering into public-private partnerships (PPPs) to leverage additional resources. There is no real reason to believe that partnerships with for-profit bodies would actually save costs for the state or significantly enhance quality. Further, worldwide historical precedent shows that only a public system of education can provide universalization of education. The assumption that private is better ignores the thousands of successful examples of government-run schools. Whole strands of educational systems like the Kendriya Vidyalaya schools exist that are as good as the best of the private, fee-charging expensive schools, belying the impression that all government schools are bad. These examples need to be learned from and replicated, instead of handing of schools to the private sector or seeking answers in the magical panacea of private engagement. There is enough evidence to show that private schools are usually exclusionary to the poor, the dalits, the muslims, the adivasis and children with disability. There is no real reason why PPP schools would be any different. Let us not forget that over 70% of India lives on less than ₹ 20 a day. The fees-charging private sector is unlikely to ensure equitable, quality education for this majority of the population. This emphasis runs counter to the spirit of the RTE, which holds the state accountable for ensuring education. Indeed, it is our hope that the immediate future would see a rational, fair and transparent mechanism of regulation of private providers of education to ensure inclusion of children from marginalised communities in schools and to minimize malpractice. For existing PPPs too, accountability systems require review, stronger regulation and transparency of agreements.

Universalization of quality cannot be ensured without ensuring equity, given the fact that the most significant resource gaps are in areas with marginalized populations. An equitable quality public education system should be ensured for every child in India. The document claims that “it is not unreasonable to state that access is now more or less universalized". A random look at any large city intersection would show that children are out of school and many of them are working. India continues to lack a minimum age of employment with the last census recognizing 6 lakh children under 6 as being employed. The labour ministry is still reluctant to impose a blanket ban on child labour, despite the passage of the RTE Act that mandates these child labourers should in full time schools. A strong public education system wherein all children receive quality and equitable education is the only solution that history has given for bringing all children into school. The large numbers of children out of school, especially at secondary level, is a direct consequence of the high rates of privatization. Let us not forget that India’s education system is already among the most privatized in the world. There is no need to accelerate this trend.

While the approach paper is committed to universalization of secondary education, it lacks the rights language, recommending that “PPP in secondary education be vigorously explored" instead. At the heart of the discussion is the matter of approach -- is secondary education going to be seen as a right, or a commodity outsourced to a wide range of providers? Several civil society activists hoped that the plan would push the boundaries of the delivery of education for excluded groups and include an upward revision of the RTE standards that most people would agree are rock bottom basics. Instead we got a document that does not even reflect the work that the government is already doing.

Almost half the chapter on education looks at higher education. Hopefully, this massive expansion would not be at the expense of the as yet incomplete agenda of school education. Unfortunately, here, too, the intent appears to be to further extend privatization and deregulation of an excessively privatized and corruption-prone sector. Reliance on for-profit, fees-charging institutions is likely to continue to exclude representatives from marginalized groups. The chapter goes as far as intending to reconsider the “not-for-profit tag" in higher education. Let us not forget that the best colleges across the world (including institutions like Harvard), are not-for-profit ones. There is no reason to assume that for-profit higher education providers in India would have a different experience. The intent to expand the vocational education net from the secondary level and effectively form yet another tier in the educational system whereby children are streamed into vocational education in school and stay there carries the risk of creating a discriminatory education system.

In conclusion, the approach paper fails to address the actual issues on the ground and lay down a vision for eradicating the educational inequalities of society. Indeed, it even fails to reflect the work already initiated by the government and constitutes a step back from work already undertaken towards strengthening the school system, choosing instead to opt for a wholehearted endorsement of privatization. Such a strategy would be dangerous in the long run. Let us not forget that India’s perceived demographic dividend of a young population can potentially turn into a demographic time bomb unless they are truly empowered through meaningful education.

Ambarish Rai and Anjela Taneja represent the RTE Forum, a network of networks and agencies on the Right to Education. Ambarish Rai is also the Convenor of the Peoples’ Campaign for Common School System, while Anjela Taneja is the lead specialist on education in Oxfam India.