What is the cost of information, or the lack of it?

For some, it is a life, for some other, a monthly pension, and for yet another, the monthly subsidized ration. In India, millions of people lose their rights, entitlements, assets, education, pension, wages, food and water, land and livestock, housing, medicine, health and access because of a lack of information, or because of the lack of access to information.

The layers of exploitation are clear to anyone who spends a few days in India’s hinterland where crores of people live in poverty. The first layer could be that I am extremely poor and illiterate so I may not know that I have several rights, and hence am unable to exercise them. Another layer could be that I know my rights and entitlements, but do not know how to avail of them, while those who know either take them away from me and enjoy them, or they charge me heavily for them, leaving me with very little of what is legitimately mine.

In Parsoni village of West Champaran district in Bihar, people stand in a snaking queue to open bank accounts under the Pradhan Mantri Jan Dhan Yojana, paying ₹ 200 per head, even though these accounts are supposed to be free. In the same village, a government official comes to distribute old age pension for five months at the rate of ₹ 400 per month. Instead of ₹ 2,000 due for five months, he was giving pensioners only ₹ 1,600, while making them sign saying they received the full amount. Similarly, in Burmu block of Ranchi district of Jharkhand, a local computer and Internet-enabled kiosk operator charged ₹ 50-200 for opening a bank account under the Jan Dhan Yojana. In Ratnauli village in Muzaffarpur district, hundreds of women have not been paid or have been underpaid for rural job guarantee work, while an official website says they have indeed been paid. They line up in front of an Internet kiosk for a printout to see if their names are actually mentioned in the list of payees. 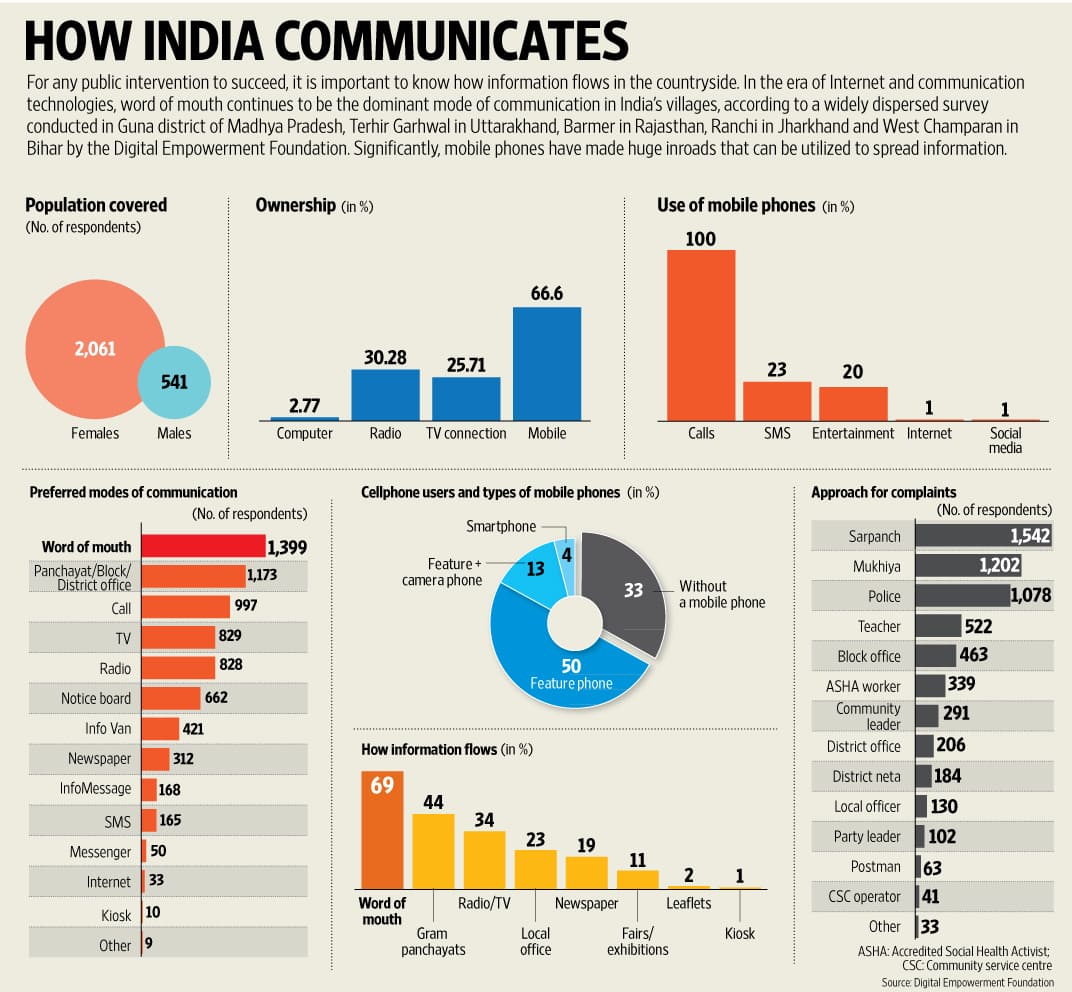 It is clear that government mechanisms are woefully ill-equipped to serve the information needs of citizens. This forms a vicious circle of low-quality information, as the primary focal point for any complaint or queries that people have are also the sarpanch and the mukhiya (village heads), with about 59% and 46% approaching them, respectively. Radio and TV with 34%, local offices 23%, newspapers 19% and local haat or bazaar with 11% are the other major sources for villagers to gain information.

Mobile ownership across the surveyed areas stands at about 67% across feature phones, feature and camera phones, and smartphones. With costs of mobile devices falling over time, the mobile phone is in a great place to emerge as a change-making platform for accurate and reliable information dissemination. It could also be used to augment the abilities of the panchayat and elected officials to facilitate the spread of correct information.

Interactive voice response interfaces or helplines could be the best method for facilitating this, as everyone with a mobile uses them to make calls. Only 23% of people with mobile phones use them to send and receive messages. The low levels of messaging are probably a result of the low rates of literacy in the regions with over 67% of the population possessing less than fifth grade education.

Understanding information flows and nodes in rural areas is vital to the design of any intervention that seeks to reach our village folks. For now, considering oral medium as the practised mode of communication, and mobile as a tool with a wide reach, where people largely reach out to the gram panchayat for information, it is critical to strengthen the local governance system with reliable modes of communication. Obviously, making information available is one thing and how it reaches the people, if at all, is another.

Osama Manzar is founder and director of Digital Empowerment Foundation and chair of Manthan Award. He is also a member of working group for IT for masses at the ministry of communication and IT. Tweet him @osamamanzar