Rajat Gupta is the latest golden boy to be scooped up and tried for insider trading.

Rajat Gupta, the former McKinsey & Co. managing director, was good at getting cash — and putting it to good use, too. He co-founded the well-respected Indian School of Business with Anil Kumar, the former McKinsey director who fessed up to receiving cash for inside information from billionaire Raj Rajaratnam, the founder of Galleon Group. The part about it that gives you the creeps is that Kumar received the ill-gotten gains in a Swiss account in the name of his domestic worker. Rajaratnam is serving out a stiff 11-year prison sentence after being convicted on 14 counts of conspiracy and securities fraud.

Gupta, a former director of Goldman Sachs and Procter & Gamble, has been accused of leaking boardroom secrets from those two companies to Rajaratnam.

Gupta’s reputation may have been tainted by the accusation — which is yet to be proved — but the enthusiasm with which his rich and good friends are engaged in defending his character demonstrates that cold cash and a warm heart can coexist. The website www.friendsofrajat.com is maintained by Gupta’s friend, Atul Kanagat, who has stated that Gupta is “like a dolphin caught up in a tuna net". Reliance Industries Ltd. chairman Mukesh Ambani and some other well known Indians have signed up at the website in defence of “Gupta’s character and integrity". 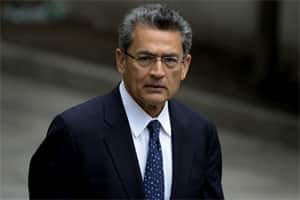 In an almost 18 minute FBI wiretap from July 2008 between Gupta and Rajaratnam, the latter talks about giving Kumar $1 millions – “after tax and off shore" -- for doing nothing and Gupta’s response is that Kumar should be more thankful.

The American system for all its faults works well at times. And this case presents a wonderful example of the system at work when US District Judge Jed Raskoff, who is presiding over the case, finessed the business of relevance of Gupta’s good character in the case at hand when he stated that, “If Mother Teresa were here charged with bank robbery, what the jury would still have to determine is whether the evidence showed that she had committed bank robbery.

Very few men are totally evil. A vast majority of criminals are otherwise rather nice guys. They have families and loved ones and charitable moments. And it is often said that smart criminals are never caught. So we must have many living amidst us as wolves in sheep’s clothing.

But is Gupta going to emerge a dolphin or be recognized as a shark? All his prior good acts in the world are not going to help him if the jury finds him guilty of what he has been charged with.