Sebi believes it needs to protect investors from burning their fingers trading in the derivatives markers, but should it be worried about retail participation?

Securities and Exchange Board of India (Sebi) has released a discussion paper titled Growth and Development of Equity Derivatives Market in India. A quick glance at the report betrays its view that growth is skewed and needs to be curtailed.

This concern isn’t new and has been discussed in this newspaper earlier.

Last year, Sebi tried to discourage participation of retail investors by increasing the minimum size of equity derivatives contracts to Rs5 lakh, from Rs2 lakh earlier. While Sebi doesn’t specify it, data cited in the report suggests that the number of individual investors trading in equity derivatives has fallen by a fifth to 0.57 million after the increase in the minimum contract size.

Evidently, the regulator believes it needs to do more to protect individuals from burning their fingers trading in derivatives. An outright ban, thankfully, is not being discussed. Even so, the report mentions a product suitability framework which, if implemented, can bring down participation further.

But to start with, should the regulator be worried about retail participation in derivatives? While it’s true that derivatives are more complex than buying stocks, the fact remains that trading in stocks itself is a very complex matter. And research shows that investors learn with experience and get better with time spent in the markets.

The report suggests that the fact that equity derivatives’ turnover is as much as 15 times the equity cash market’s turnover is a concern. This clearly makes India an outlier—the global norm is around 5 times, according to an expert in market microstructure, with the only exception being South Korea, where the ratio is well over 20 times. 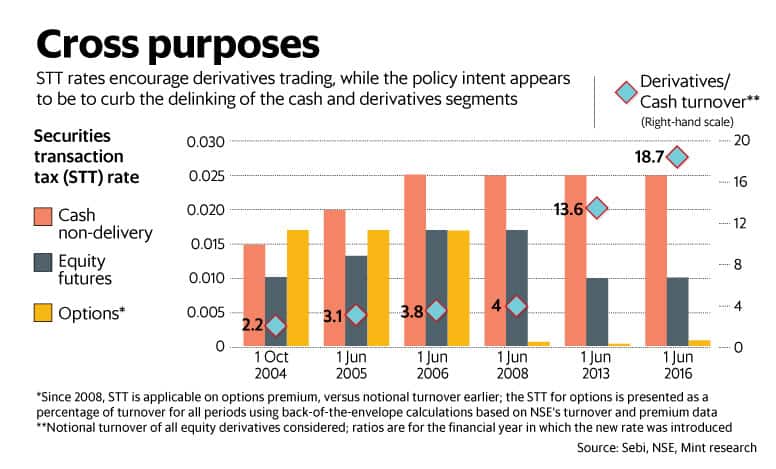 But some market participants argue that the ratio is skewed in India because of unusually high options volumes. Thanks to a huge tax advantage, traders prefer trading out-of-the-money options, where the premium is a tiny fraction of the notional value of the contract.

In June, for instance, index options contracts worth Rs93.8 trillion were traded on NSE, accounting for 82% of total equity derivatives’ turnover. But the amount of premium that changed hands between buyers and sellers was just Rs26,821 crore, or 0.3% of the notional turnover.

Given the policy view that derivatives are now quite delinked from the cash market, one way to bring parity would be to rationalize transaction charges in the cash segment. As the chart alongside shows, transaction taxes have been raised for the cash segment, while they have been lowered for futures and options.

In any case, using premium turnover isn’t the best method to assess risk, as it fails to capture the exposure these contracts provide. A fair question, of course, is if index derivatives should be included at all, when comparing to cash market volumes, where only individual stocks trade. In sum, the 15 times ratio is a bit of a misleading number, and policymakers must be careful not to get carried away by it.

In fact, a far better measure of the risk in the system is the open interest, or the value of the outstanding contracts in the market, relative to turnover, points out Venkatesh Panchapagesan, associate professor, finance & accounting at IIM Bangalore.

“It’s surprising the Sebi paper doesn’t look at open interest, considering that they are worried about risk", he says.

Turnover data, after all, can have an element of double counting. For instance, if a trader has a long stock futures position worth Rs1 crore, but has hedged it by writing call options, his turnover will show up as Rs2 crore, although in reality, he is carrying nearly zero risk.

Panchapagesan says either open interest data or data on margin payments will give a far better picture of risk, compared to turnover. Margins are calculated after accounting for offsetting/hedging positions. In other words, a trader who is garnering huge volumes using a relatively low amount of margin would essentially have a relatively low risk profile.

As such, the Sebi paper falls short on the data required for careful analysis of the issue. Even so, it has some new sets of data, which may soothe the nerves of those who are worried about small investors burning their fingers trading derivatives. For instance, this article had said that while retail investors account for only 18% of the total equity stock issued in the country, along with proprietary traders, they account for 83% of equity derivatives volumes. The Sebi paper points out, for the first time, that the contribution of individual investors to equity derivatives trading stood at 25.67% in FY17.

And among the individual investors who trade derivatives, over 55% of turnover comes from those who also traded cash equities worth Rs1 crore during the year. In other words, these individuals engage in a large amount of trading, in any case.

In sum, while Sebi’s discussion paper suggests that it is uncomfortable with the participation of individual investors in the derivatives market, it doesn’t clearly articulate its concerns. Nor does it provide the relevant data to make a strong case for any curbs. While the paper itself is an improvement, compared to the last time when it increased the contract size without any discussion, it will do well to supplement it with additional data.