Of bloodbaths and paid baths

Of bloodbaths and paid baths

Idea Cellular CEO Sanjeev Aga’s sanguinary forecast of the future of the telecom business in India is a little late in coming. As is a warning to investors from Macquarie Research analyst Shubham Majumder that suggests they avoid investing in the sector “as a dynamic game of price positioning plays out over at least the next two or three quarters".

Local calls on mobile phones cost 40 paise a minute in India. They will go lower. Low enough, indeed, for the country to become the first in the world to move to a concept that telecommunication industry executives and industry have been aware of for at least a decade: free voice calls. 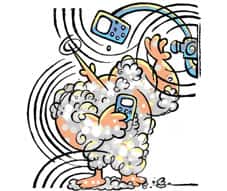 If companies have known the perils of overdependence on local voice calls, why haven’t they done something about it?

Actually, they have. At least a third of the revenue of telcos that have been around for some time—and around half their profits—comes from “roaming" where their subscribers use their phones while travelling within the country and without and so-called value-added services such as short messaging and music downloads. That proportion will increase with time.

To be sure, the coming months and years will see some telcos suffering the results of overdependence on voice and others selling out, but even amid the “bloodbath", there will be those that find ways to stay profitable.

New entrants will lose money as they fight for share, but that’s something that happens to new entrants in most businesses. The smarter new entrants will likely share infrastructure and outsource most of their operations—both trends that the first generation of Indian telcos discovered only earlier this decade (thereby liming what analysts term “the upside"). Both new entrants and existing players of all sizes will also try to build their brands, grow their reach, segment the market and launch a variety of value-added services. That sounds a lot like what makers of consumer products such as soaps do.

Only, in this case, the telcos will be hoping to make money by giving the soap away and charging for the bath.

Can telecom companies adapt to a free voice call future? Tell us at views@livemint.com