Home >Opinion >Transparency is not always a good thing

Transparency is not always a good thing

Transparency is not always a good thing

The chief executive officer of the National Stock Exchange of India Ltd (NSE), Ravi Narain, recently told Financial Times newspaper that he was extremely disturbed by the trend towards the so-called dark pools.

According to the daily, Narain’s concern is that these dark pools “have arrived with no regulatory responsibility and come in on a platform of opacity".

In the aftermath of the global financial crisis, the problems related to the opaqueness of over-the-counter (OTC) derivatives markets came to the fore and one of the lessons of the crisis has been that exchange-traded products should be encouraged more. This column has also argued that regulators should promote trading of standardized contracts on an exchange platform and the recent decision to allow interest rate futures trading is a great step in that direction.

Having said that, it’s not fair to portray all dark pools of liquidity as having the same level of opacity as some OTC markets. In the description of dark pools provided above, the opacity is at the pre-trade level, as traders can’t see bid and offer quantities and prices. They do have post-trade transparency, since trades are reported as public information. All these descriptions apply to a typical dark pool trading venue such as Liquidnet Holdings Inc. and there would be variations.

In a typical exchange such as NSE, there’s both pre-trade and post-trade transparency. Not all market participants will agree that having full transparency at the pre-trade level is such a good thing. As Larry Harris points out in his book titled Trading & Exchanges: Market Microstructure for Practitioners: “Traders are often ambivalent about transparency. They favour transparency when it allows them to see more of what other traders are doing, but they oppose it when it requires that they reveal more of what they are doing."

Harris served as chief economist at the US Securities and Exchange Commission between 2002 and 2004.

For perspective, consider a large investor such as HDFC Mutual Fund, which wants to make an investment worth Rs100 crore in a security that has a daily traded volume of Rs200 crore. Full transparency of that order at the pre-trade level will cause shares to skyrocket, resulting in a massive market impact cost for the fund house. While transparency is good, it comes at a cost. 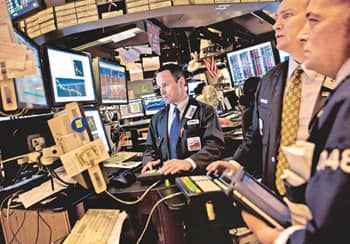 The second option is to engage in a block deal with some other investor. This again could be arranged by a broker who would seek out some other institutional investor who’s willing to match the order. Since Indian regulations ask that all trades should be reported on an exchange platform, the trade is either done in the block deal window or executed by two brokers who punch in orders into NSE’s system at the same time at a price between the best bid and the best offer.

In such deals, there’s almost zero pre-trade transparency. The trade has effectively been done over the phone and the rest of the market has no inkling of such a large order being in the offing. Dark pools may sound sinister but are essentially an extension of this manner of trading, where large institutional investors prefer to match orders among themselves in order to reduce market impact cost and avoid front-running.

Martin Wheatley, chief executive of Hong Kong’s Securities and Futures Commission, told The Wall Street Journal recently: “Dark pools have got this wonderful, mysterious name around them, but they’re a technological reinvention of the old fax lists that used to be sent around. Twenty-five years ago, every broker would know what its clients wanted before they executed on the exchange, and they’d fax around to a few of their favourite clients and say, ‘Would you be interested in these stocks?’ So it’s nothing new really, but obviously the technology is giving it the ability to be much more significant in markets."

The post-trade information is important for price discovery, since other market participants can use this information of a large deal to take informed decisions. In that regard, trading venues that keep quotes invisible should be prompt in dissemination of post-trade data.

Perhaps there could be guidelines and even regulation of this being done in an orderly and standardized manner. In the US, dark pool venues such as Liquidnet Holdings report post-trade data to the so-called consolidated tape, which is a high-speed, electronic system that constantly reports the latest price and volume data on sales of exchange-listed stocks from various market centres.

Exchanges are platforms that provide buyers and sellers the best possible execution while maintaining market integrity. For large traders, best execution involves secrecy. It seems unreasonable to remove the dark pool avenue where this can be done.

In fact, the world’s top exchanges such as the New York Stock Exchange, Nasdaq-OMX and Singapore Exchange have launched exchange-backed dark pools. This acknowledges that large traders need such services and it’s better to offer it in-house rather than having competition from broker-owned networks and alternative trading systems.

In The Money runs every other Tuesday.Comments are welcome at inthemoney@livemint.com