India after the NSG waiver

India after the NSG waiver

What does the waiver from the Nuclear Suppliers Group (NSG) on Saturday say about India and the environment it operates in? It pays to have powerful backers and friends in the dog-eat-dog world of international politics. It also highlights the fact that India’s limitations are of its own making—and will be, for a long time.

Until the eleventh hour, it was not clear whether India would manage the waiver from the 45-member NSG. This waiver is essential if India is to secure nuclear fuel, materials and technology even from countries willing to supply them—for example, France and Russia. As all NSG decisions are made by consensus, even nuclear nobodies Austria, Ireland and New Zealand could hold out. 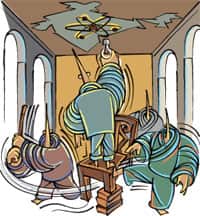 In real terms, there is no case for India trying to build bridges with China, except that it is our neighbour and that we, as a people, have for millennia believed in good relations with our neighbours. Unfortunately, China does not seem to think so: It waged a war against us in 1962, it regularly insulted the founding fathers of our republic (remember Mao’s barb: Nehru and Gandhi as the running dogs of imperialism), it continues to supply nuclear weapons to Pakistan and, of course, obstruct India at all international fora.

What matters is that if India does become a counterweight to China, it will continues to have autonomy in making strategic decisions—friendly and offensive—against that country. Historically, in case of strong nations, the US has not interfered in such matters. Where it has (for example, in the case of Pakistan, Central America and in some East Asian countries), it has been due to the internal weaknesses of these countries.

This brings us to the sad spectacle of the Bharatiya Janata Party (BJP) and the Left trying to score political brownie points. Internal weakness is the first halt on the road to international submission. The Left can never appreciate this. But what is painful is that the BJP, the party that initiated post-Cold War rapprochement with the US, should fall prey to petty political intriguing. For the sake of India’s strategic strength, political parties should learn to separate their political concerns from national interest.

Should India align with the US? Write to us at views@livemint.com