Till recently, a spurt in voter turnout was considered as expression of voters’ emotions, associated either with anti-incumbency or an overwhelming endorsement for the incumbent in extreme circumstances. But this causality may not be necessarily true in the current election, where voter turnout is at a record high.

However, recent assembly elections in Rajasthan, Madhya Pradesh and Chhattisgarh have experienced unprecedented voter turnout of 75%, 72% and 77%, respectively. In two states, the incumbent regime was re-elected while in one the vote was for change.

Part of the reason for the increase in voter turnout could be attributed to the Election Commission revising the electoral rolls and engaging in outreach. In other words, high voter turnout in recent polls cannot be viewed as a vote of anti- or pro-incumbency. Instead, it is due to a combination of factors and hence more complex. 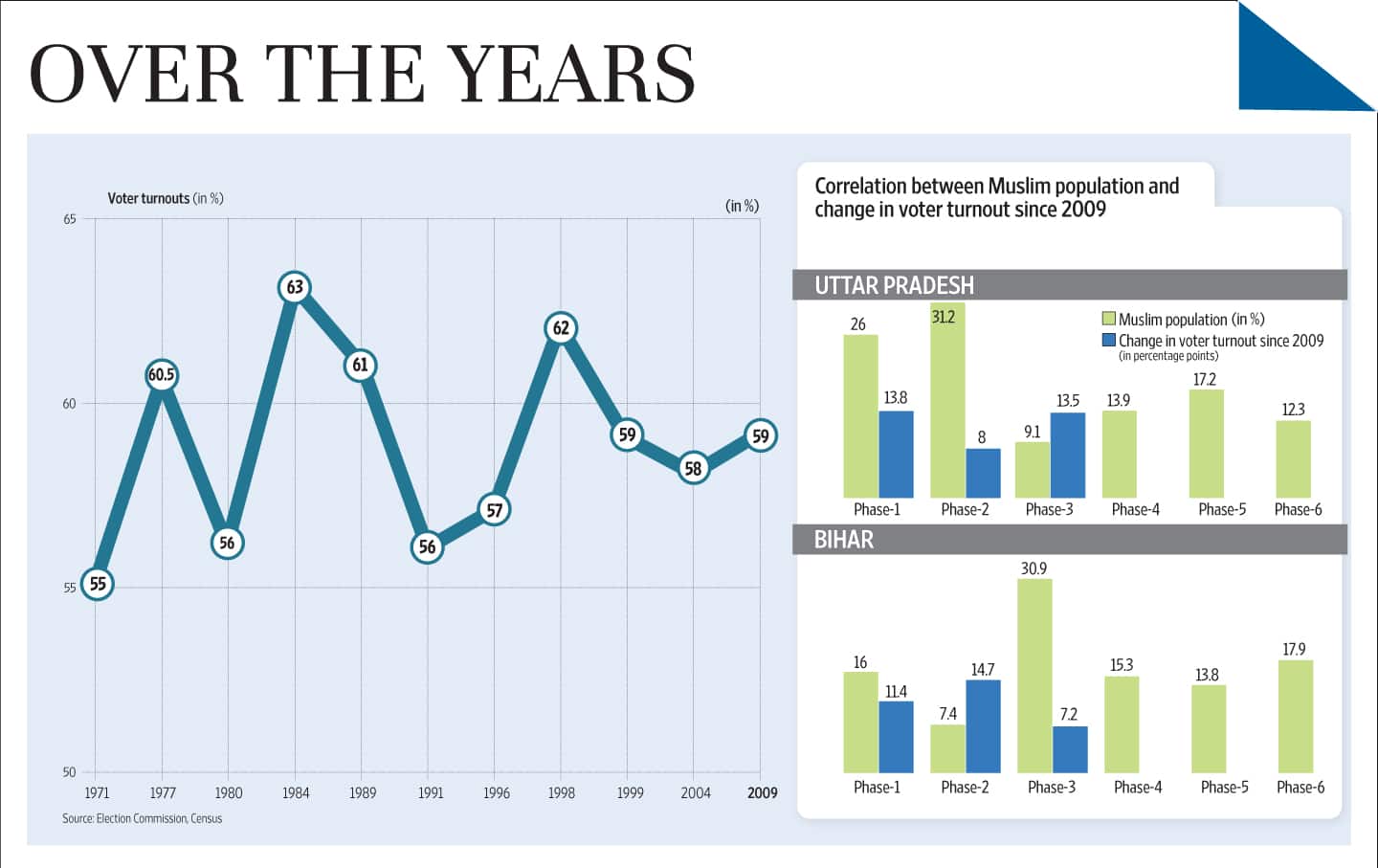 However, this claim doesn’t stack up against the facts if we analyse the correlation between the proportion of Muslim population gleaned from the Census and the voter turnout in four phases polled so far in Uttar Pradesh and Bihar.

The turnout in both the states in 2004 as well as 2009 was the highest in the phases with the largest concentration of Muslims. In other words, the Muslim turnout is already at near saturation levels and the increase would be made up of non-Muslims.

Take the case of 11 constituencies in western Uttar Pradesh that went to polls in the second phase. This area has more than 30% Muslim population but the BJP in alliance with the Rashtriya Lok Dal was leader in 2009, winning a vote share of 26% voted followed by Samajwadi Party (24.4%), Bahujan Samaj Party (23.2%) and Congress (19.3%) in a relatively more secular political environment. In 2014, the voter turnout in this area is 62% in a communally polarized environment. In 2009, it recorded a turnout of 54% compared with the state average of 48%.

In the final analysis, it is clear that the simple causality assumed previously would not necessarily hold true in this election. We will just have to wait for 16 May to draw our conclusions.

Devendra Kumar is a psephologist and director of Research and Development Initiative.