Home >Opinion >Online-views >The perils of Fordism in India

The perils of Fordism in India

The perils of Fordism in India

The story that Henry Ford raised the daily wage of workers at his auto plant to five dollars—he wanted them to be able to afford the cars that they made—is elegant and shows capitalism’s humane side, but that’s not the only lesson from that story. First, it does not work in every industry—try applying it to polishing diamonds. Then, the story is also only partly true; the additional cost of wages was quite large, and incremental sales to workers alone wouldn’t pay for the increased cost. What made it worthwhile was the overall rise in productivity, which Ford derived through worker loyalty and reduced employee turnover.

And yet the five-dollars-a-day figure resonates, because in nominal terms, that is more or less the wage a temporary employee got at the now-closed Manesar plant of Maruti Suzuki, at about ₹ 7,000 a month. That salary could buy a Ford worker his Model T costing $480 a century ago; it is not going to buy the temporary employee his Maruti 800 (about ₹ 200,000, or $4,000) so easily. (Yes, there is car financing; yes, these prices and wages are separated by a century and aren’t comparable, nor adjusted for inflation; and yes, this is hypothetical). 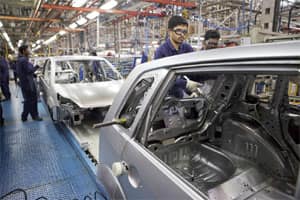 The temporary worker hasn’t joined the plant for the uniform, hard hats, or for the joy of singing the company song. He hopes to be made permanent, to earn ₹ 17,000 a month and get benefits. Managers want to avoid just that, because once he becomes permanent, he can join the recognized union, bringing in rigidities that the management wants to shun.

And so executives have bent rules, and possibly broken the law: contract workers are denied the right to form a union, and the principle of equal pay for equal work is violated in spirit.

It isn’t only about wages. The Supreme Court has dealt with the issue in several cases involving firms that consistently use temporary labour without employing permanent workers for the same position. The constant uncertainty, or “suspended animation" of being kept temporary while doing tasks that permanent workers do was deemed unfair, and the policy of keeping individuals “temporary" for long periods was held improper. The State had a mandate to replace temporary workers with permanent ones as soon as practicable. In other words, the appointment of temporary workers was permissible only on account of exigency and not as a matter of employment policy. Supreme Court advocate Nikhil Mehra points out that while these judgements dealt with a case where the employer was the state and the employees were of a temporary nature rather than contract labour, it is ethical to point out the parallel with the private sector. Job security affects all workers; all workers ought to be able to join a recognized union of permanent workers which has greater bargaining power; all workers should be entitled to similar benefits once they are made permanent. And to be made permanent ought to be the norm without suffering the divisive indignity and disadvantage of having classes of permanent and contract labour for the same functions.

The mood at the Manesar plant had been combustible since last summer, as the website Kafila published in several reports, leading up to the ghastly tragedy of a manager burnt to death, the vandalism, the arrests, and the likely criminal prosecution on murder charges. But there is no single root cause. The firm had to squeeze costs in an increasingly competitive market. Wages were not keeping apace with inflation. And the company preferred the flexibility of temporary workers.

Competition forces hard choices. India is no longer a Maruti country. In his time, Ford could tell customers they can have a car in any colour so long as it is black. Try saying that today.?Maruti can’t, its many rivals can’t.

Auto industry wants flexibility because of fluctuating demand. It should learn from others who have dealt with seasonal demand. Software is a highly competitive industry where union presence is minimal, and where the dynamic changes rapidly. But most companies don’t routinely lay off staff when demand falls; they are kept on the bench, on the payroll, and sent to work on projects as they materialize.

To be sure, the economics of software development is different. But unions and executives will have to look outside the box. Squeezing costs should not mean squeezing workers. Improving cars for the middle class should not impoverish the working class. Management flexibility should not erode workers’ fundamental rights. And asserting workers’ rights does not mean destroying property or committing violence.