Blaming a newly inducted home minister for not preventing four low intensity blasts that led to no major attrition in an administratively difficult country seems unfair. It isn’t. And, inability to guard India against terrorism is not the only failure of this government. 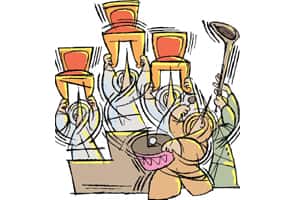 At one level, there is no doubt, that governing a country of bewildering diversity is a difficult task. To ensure that breakdowns don’t occur, it is important that ministers—especially those with sensitive portfolios—be masters of administrative detail. That, in turn, requires grooming in jobs where some experience of this kind can be gained.

That system does not exist in India. For example, at the Union government level, the job of a minister of state (MoS) can be a training ground for politicians who can later man the serious jobs. Instead, virtually all of them are treated as busybodies by their senior cabinet colleagues. For example, an MoS for home is usually given only the “low voltage" stuff to handle. Or, even if he gets an important job, the cabinet minister won’t let the junior man take any worthwhile decisions. It is an interesting exercise to see how many ministers of state in the past 10 years have gone on to become cabinet ministers in the ministries where they serve. The answer is disappointing.

The result is that the link between acquisition of vital administrative skills and allocation of portfolios is weak at best and probably borders on being a random event. What matters is the political equation between ministers and the powers that decide who gets what. As a result, most ministers (and ministers in waiting) prefer to hone their political skills—of a wrong kind, of course—instead of trying to acquire a measure of skill in governance.

Thus, the interplay of two forces—lack of skills at the junior level and aimless politics—ensures that the pool of persons to manage the top jobs is either dry or so muddy that the choice among different individuals does not matter. In the “reshuffle" that has just taken place in the Union council of ministers, this pernicious effect is visible quite plainly. All this would not matter in the India of the 1950s, but today the consequences of this defunct politics are disastrous.

Shrinking pool of talent or mindless politics: what are the reasons for India’s drought of skilled administrators? Tell us at views@livemint.com