Philanthropy has gained more prominence over the last five years in the country and the growing pool of wealthy individuals is expected to lead the increase in donations. However, a large number of donors also lack trust in non-governmental organizations (NGOs), according to Bain and Co.’s India Philanthropy Report, 2015, which will be released on Saturday at the Dasra Philanthropy Week event in Mumbai.

The focus of the report this year is the evolution of philanthropy, and recommendations for sustaining and building the momentum in India.

With about a 100 million more donors entering the fold since 2009, the country had about 249 million donors in 2013. A larger percentage of India’s population is making charitable donations now compared with other developing countries such as China. In fact, India is now at the 69th position on the World Giving Index, up from 134 in 2010, says the report. 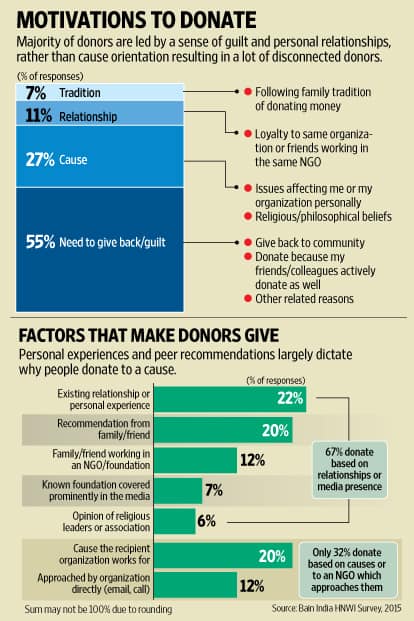 “On an average there is a general level of misgiving and lack of confidence among donors on how non-profits track funds and grants. The expectation of sophisticated donors from NGOs is very high. And though NGOs have scaled their administrative capabilities, they still belong to the minority," said Arpan Sheth, partner at Bain and Co. India and co-author of the report.

Even though the percentage of adults who donate has doubled to 28% in 2013 from 14% in 2009, the study finds a large number of disconnected donors. Fifty per cent of the donors are constrained by a lack of information about which organizations to donate to and how, and most of their funds are received by unsophisticated NGOs. 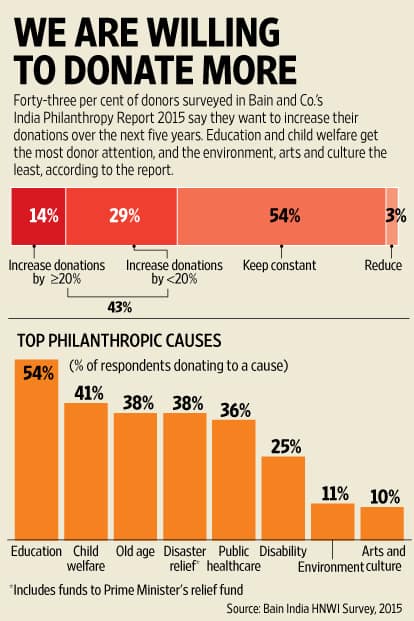 The outcome of this is a two-tier philanthropy space—the top tier has sophisticated donors working with sophisticated non-profits consistently to create superior outcomes. The bottom tier is characterized by donors perpetually seeking causes to support and non-profits are in a permanent pursuit of donors and money.

NGOs too are increasingly noticing a shift in donor behaviour and seeing more activist donors, who encourage discipline among NGOs.

Maithili Parekh and Shashank Singh are one such couple. Parekh is an art historian, and Singh is partner at Apax Partners India, a private equity fund. “We were earlier making ad hoc donations based on personal requests," said Parekh. “It was when we increased our giving that we started to think strategically around factors such as accountability, impact, and potential to scale," she said.

The couple, who support the abolition of child marriage and domestic violence, donate to NGOs that have a track record of using funds efficiently and are focused on capacity-building. NGOs like Asha Sadan, Tata Institute of Social Science’s Resource Centre For Interventions On Violence Against Women and the Institute of Health Management have been recipients of their donations. They did not want to say how much they donate.

“The biggest shift in the last five years or so in the donor attitude has been the reduction in generic funding or what we call institutional funding. Increasingly, funding is more easily available for specific tasks and targets or projects," said Aditya Batra, programme director (board and funding) at Centre for Science and Environment in Delhi.

“Donors are looking at not-for-profit sector more as an investment and money is given on the basis of the donor’s internal specific targets and expected results," said Batra.

According to him, earlier funding was more in the form of support, which had fewer demands from donors. “Among the donors there is a purposeful shift to bring professionalism and accountability modelled on the corporate sector," he said.

Yet, another factor that will force NGOs to make themselves more attractive to sophisticated donors is corporate social responsibility (CSR).

Sheth of Bain feels that with the mandated CSR spending, at least some of the two million NGOs in the country are expected to build up their capabilities.

“We are beginning to see the impact of CSR on NGOs. Corporates are not flooding NGOs with capital, and are giving a lot of thought to where they should donate. They are cautious about identifying which NGO will use funds productively," he said.

To expand the larger pool of strategic donors, Sheth feels peer mentorship, where donors share experiences and guide the people in their network to give, can be a powerful tool to increase that pool. In addition, he said he believes visible examples of giving will also make a difference in bringing more strategic donors into the fold.

Ikea Foundation has been working on child labour and women’s empowerment for the last 15 years in India.

“As donors we have stringent reporting requirements and are not cheque book activists," said Jonathan Spampinato, head of communication and strategic planning at Ikea Foundation. “We set internal long-term goals and based on that partner with local organizations after following due diligence. Currently we are also contemplating a system wherein we can introduce third-party impact assessment."