The endgame: a continuation of monetary manipulation by the US Fed will push up gold and the Indian rupee

A news story that appeared in The Wall Street Journal on Friday is important. Its significance will be felt not just in the coming days and weeks but also in the coming months and years.

That story exposes the lack of logic in the global sell-off in gold and it contains the kernel of hope for a recovery in the Indian rupee against the US dollar in the medium term—provided India does its part.

The Wall Street Journal report is this: Several members of the US Federal Reserve Board spoke on Thursday and Friday in an attempt to disabuse the market of the notion that the Federal Reserve was in a hurry to end its asset purchase programme. The story confirms what most of us had known and written about all along. Once you get someone addicted to easy money, weaning them off it is not going to be easy. Both the drug dealer and the user are hostage to the drug. That is what the market reaction to the comments by Fed chairman Ben Bernanke since 22 May confirms. 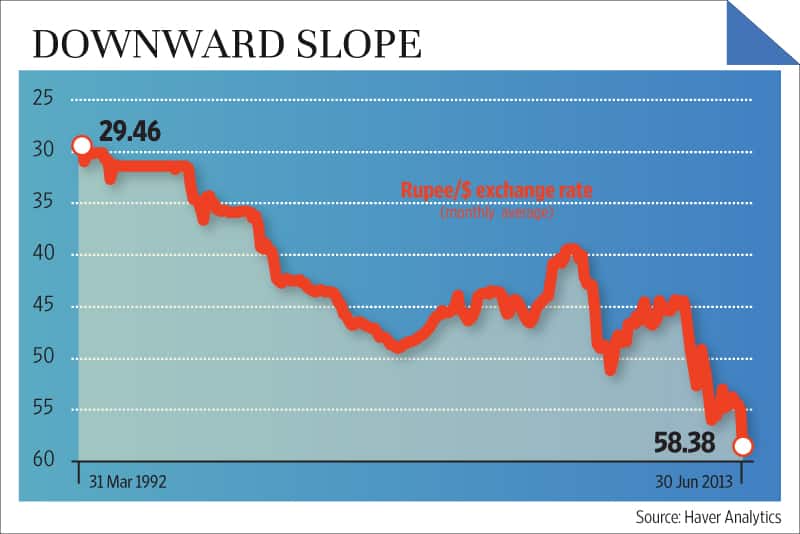 Now, the contours of the hypotheses or predictions put forward in the second paragraph—about gold and the rupee—must be becoming clearer.

Let us deal with the first of the two hypotheses: the case for gold after the global sell-off that drove the price of gold to below $1,200 per ounce. The endgame of the monetary manipulation must be inflation of all kinds—asset prices and in goods and services used by households. The recent strength in the US dollar is yet to take on board this potential final outcome of monetary manipulation.

Liquidity driven improvement in real estate markets and in residential construction in the US are taken as signs of economic recovery. In fact, the strength in the US dollar and last week’s recovery in US stocks are incompatible. As the foreign exchange market finally prices in the conclusion that the US stock market has “won" the battle of wits with the Federal Reserve, the US dollar should begin to weaken once more and the stock market will follow too.

While plenty of clouds—slowdown in Europe and in China and other emerging economies—obscure this view for now, this endgame should become evident once these clouds dissolve. Hence, as long as this denouement for the US dollar remains a possibility, the insurance case for gold in global investment portfolios remains relevant.

As for the Indian rupee, the accompanying 20-year chart is rather illuminating. Sustained rupee weakness has been more the norm than the exception. Exchange rates may not move in line with inflation differentials year after year but movements in exchange rates do reflect inflation differentials over a sufficiently long period. Hence, the weakness in the Indian rupee over the last 20 years, despite two devaluations in 1991-92, is indicative of India’s inability to achieve and maintain long periods of low inflation.

In the short run, inflation problems can be blamed on inadequately tight or loose monetary policy. However, sustained high inflation is a reflection of low labour productivity, supply deficiency, and excessive and unproductive government expenditure.

The rupee strengthened against the US dollar in the 2002-07 period for two reasons. One, Indian economic growth began to accelerate and altered expectations of future economic growth. Of course, the post-crisis experience has shown such expectations to be unrealistic. Second, India ran a credible monetary policy combined with shrewd and proactive financial sector regulation in that period. The Reserve Bank of India (RBI) deserves a lot of credit for the rupee strength in those five years. The converse that RBI deserves blame for the rupee weakness since 2012 is not true since the loose fiscal policy of the United Progressive Alliance government that laid first claim on banking resources has substantially undermined the effectiveness of monetary policy.

Post-2014, if India were to be blessed with a more responsible and less venal government, then India’s inflation can be brought under control. Together with the likely, eventually higher inflation in the US and dollar debasement, the stage could be set for a recovery in the Indian rupee then.

As of now, however, the case for gold in the global context looks stronger than the case for the Indian rupee.

V. Anantha Nageswaran is the co-founder of Aavishkaar Venture Fund and Takshashila Institution. Comments are welcome at baretalk@livemint.com.