Thanks for Visiting Mint
You seem to have an Ad Blocker on. Please turn it off in order to continue, or whitelist Mint
HOW TO TURN OFF AD BLOCKER
OR
REFRESH IF YOU ALREADY TURNED OFF THE AD BLOCKER
Home >Opinion >Online-views >India&#8217;s arsenic scourge

Arsenic has long been the poison of choice for murder-mystery writers. Agatha Christie’s evil characters chose it more times than they did other poisons such as cyanide, strychnine and nicotine. Many figures in history are suspected to have died from chronic arsenic consumption: Napoleon Bonaparte, Simón Bolivar and Jane Austen are famous examples. Unfortunately for us, arsenic is making a comeback.

Arsenic runs deep in the Gangetic plains of India. According to a World Bank study, “millions of people throughout South and East Asia inhabit areas where certain hydrogeological processes mean that groundwater may be contaminated naturally with levels of arsenic that constitute a danger to human health". This large-scale arsenic problem was first discovered in the ground waters of Bangladesh and West Bengal in the late 1980s. It has since been detected in parts of China, Nepal, Pakistan, Myanmar, Laos, Vietnam and some states of India including Bihar. 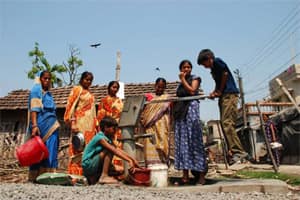 In Bihar, several districts such as Bhojpur, Buxar, Vaishali, Bhagalpur and Samastipur are badly affected. In West Bengal, districts on the border with Bangladesh face grave risks. Estimates vary, but it appears that about 75 million people are at risk in Bihar and West Bengal alone and the scourge seems to be spreading westward and up-river. Ashok Ghosh of AN College, Patna and Prof. Dipankar Chakraborti, director of research, School of Environmental Studies at Jadavpur University, Kolkata, have been studying the steady rise of the arsenic threat for many years. In a detailed study in Bihar, Ghosh concludes that about 27% of 27,000 pumps in affected districts were arsenic contaminated. In 12 districts, the average concentration was 500 ppb and the highest arsenic value recorded in the study was 1,861 ppb—nearly 200 times the safe level.

Access to sustainable, safe drinking water is one the fundamental requirements for poverty reduction. The arsenic phenomenon works like an overwhelming (health) tax on the poor. Over the last 40 years, in order to avoid the problems of water-borne diseases, more and more tubewells have been used in India. If anything, the use of tubewells has exacerbated the arsenic problem, since it leaches into ground water and makes water non-potable at high concentrations.

On pilot scale and in urban environments it is relatively easy to solve the arsenic problem using oxidation, coagulation and adsorption techniques. Filters designed for stripping arsenic from water are available commercially and potable water for purchase is also an option. Effective small-scale technologies, particularly those that can be used and maintained in villages, have not emerged yet. Dealing with arsenic contamination for scattered rural communities remains a major problem. One promising technology is subterranean arsenic removal (SAR). In SAR, aerated groundwater is recharged back into the aquifer to create an oxidation zone where iron and arsenic can be trapped on the soil particles by adsorption. No chemicals are used and almost no sludge is produced. Its total cost and practicality are still being evaluated in the field.

In severely arsenic-contaminated rural taluks in India, the first public health solution has to be awareness building about the long-term risks of chronic arsenic ingestion. This is non-trivial, because arsenic is tasteless, colourless and odourless and people do not perceive the risk. Parallely, drinking water sources should be converted from groundwater to surface water. More open wells need to be dug. Dug wells are empirically known to mitigate the problem. The Union government and Bihar and West Bengal governments appear to be going with the “hardware" solution. This solution promises piped water supply from large-scale arsenic filtration units to several taluks/districts at a time. The initial capital investment (Rs1,000 crore for just the filter unit) and the district-wide plumbing network required make the project unlikely to succeed. Prof. Chakraborti says that in his two-decade long research on the subject, he has come to conclude that arsenic mitigation has be location specific because of significant geographic and socio-economic variations.

India is in urgent need of its Hercule Poirots to root out this poison.

PS: “O true apothecary! Thy drugs are quick. Thus with a kiss I die." Romeo in Romeo and Juliet (V, iii) by William Shakespeare.

Narayan Ramachandran is an investor and entrepreneur based in Bangalore. He writes on the interaction between society, government and markets. He is also a trustee at Arghyam, a foundation focused on water and sanitation. Comments are welcome at narayan@livemint.com