Things are turning from bad to worse with every passing day in the economy, which is getting reflected in the stock markets. Last week’s stock market movement only confirms this. After a good start, which was purely on technical grounds, the markets succumbed to the economic realities and benchmark indices ended the week with a loss of about 1.6%. The upbeat mood was overtaken by fresh economic concerns and a weakening rupee, after India’s gross domestic product (GDP) report was out. The GDP growth slumped in January-March to a nine-year low of 5.3% as the manufacturing sector contracted.

Also, the current state of economy and the falling rupee only suggest the worst is yet to come as far as the GDP growth is concerned since the economy is under a lot of pressure. This is further reflected in the lowered GDP estimates by a number of investment banks, which now peg India’s economic growth estimates to 5.7% from 6.3%, after downgrading the forecast about two weeks ago from an initial estimate of 6.9% growth. 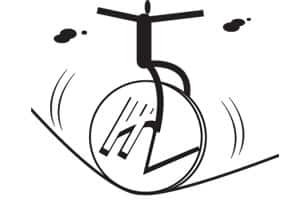 With signs of Chinese economy slowing and the US economy losing momentum as reflected by the latest non-farm payroll report released on Friday, the global economic scenario looks disappointing. Now, all eyes are on the election result in Greece, which is being seen by most as the turning point in the euro zone. However, a good number of economists are suggesting to brace for the worst, which means Greece leaving the euro zone. What happens in the euro zone, only time will tell. But this is a perfect recipe of volatility amid uncertainties for global markets.

From an Indian perspective, after the GDP fiasco the market is now abuzz with talks of further cut in the interest rate in the policy review meeting of the Reserve Bank of India (RBI) on 18 June. However, the guessing will be on till the final outcome as inflation is offering no let-up and the weaker rupee has only made matters worse. Add to it, the impact of petrol price hike, the headline number is likely to remain a concern in the future. What course RBI adopts would charter the next course for the stock markets as markets are clearly gasping for some fresh triggers.

This week India’s economic calendar is light with only HSBC Markit Service Purchasing Managers Index (PMI) due on Tuesday. However, all eyes would be on the rupee, which gained sharply on Friday. Technical analysis of the rupee suggests further strength and it could gain up to 54.35 in this leg. This is the only breather for the weak trend on Indian stock markets, as the market outlook is clouded with darkness due to weak economic outlook.

Globally, the US Federal Reserve chairman Ben Bernanke will testify before a congressional committee about the state of the US economy on Thursday, which will be watched closely for signs of any stimulus, which might be on its way in the US economy. Apart from this, the economic indicators due this week include New York NAPM (National Association of Purchasing Management) index for May and factory orders for May on Monday, Institute for Supply Management non-manufacturing PMI for May on Tuesday, and weekly jobless claims and consumer credit on Thursday. There is not much due in China, while German industrial output for April will be watched closely on Wednesday.

At home, technically the outlook of the Indian stock markets looks weak and the benchmark Nifty index on National Stock Exchange of India Ltd looks south-bound. On its way down, the Nifty has its first support between 4,812-4,787 points, which is a critical support band. If it falls below this level, then it would mean bearish sentiments, with chances of further fall. The next support is then placed at 4,746 points, which is only a moderate support and can only withstand light volume-selling. In case volumes pick up, this level could go and the Nifty could then find support only at 4,640 points, which looks like a strong support in current scenario. So far, the chances of the Nifty finding good support are strong and probability analysis suggest there are upto 78% chances of the Nifty finding good support at this level. However, below this level, 52-week low of 4,531 looks like a logical strong support.

Vipul Verma is chief executive officer, Moneyvistas.com. Comments, questions and reactions to this column are welcome at ticker@livemint.com