Is inequality at the bottom of the slowdown in world trade?

Rising inequality has led to a tendency for under-consumption in the world as a whole, according to UNCTAD

What is the fundamental reason for the sluggishness in world trade? UNCTAD (United Nations Conference on Trade and Development) has a rather unconventional answer in its recently released trade and development report.

But first, the facts. The chart below shows the trend in global exports volume, with 2015 seeing a sharp slowdown. “In 2015, merchandise trade grew at a rate below that of global output, a situation that may worsen in 2016, as the first quarter of the year showed a further deceleration vis-à-vis 2015," says the report. 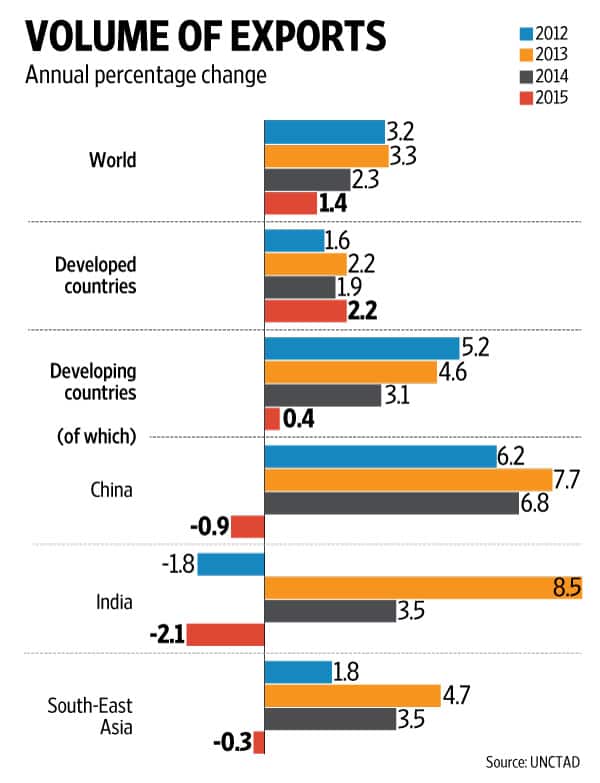 One obvious reason for the trade slowdown is the financial crisis taking its toll on demand growth in the developed economies. Indeed, most of the growth in international trade in 2011-13 occurred in developing countries, as economies such as India and China tried to spend their way to a recovery. But even that tailwind is no longer available, since developing country imports have slowed, mainly because of the slowdown in China and the fall in the prices of oil and commodities.

Could rising protectionism be a reason for the slowdown in trade? After all, there’s no dearth of theories that the developed economies are all trying to depreciate their currencies to boost exports and some have warned of currency wars. But the UNCTAD report says categorically that empirical evidence doesn’t support the theory that either tariff or non-tariff barriers to trade have increased and could be seen as an explanation for the slow growth of global trade.

Could it be that the initial boost to trade given by the relocation of industry to developing countries has slowed down? In other words, is globalization running out of steam? Several researchers have found evidence of a slower pace of expansion of global supply chains. But UNCTAD points to China, which managed to reduce the import dependence of its manufacturing exports substantially between 2002 and 2008. Despite that, the period 2002-08 saw very rapid growth in trade. On the contrary, there has been no appreciable change in the import component of Chinese exports in recent years and yet trade volumes are shrinking.

The UNCTAD report instead points to a far more basic reason—the falling share of labour incomes. The growth of wages in most developed economies has been weak or stagnant for a considerable time, with the result that the share of wages in national income has been on a downward trend since the 1980s.

Developing countries, on the other hand, face pressure on wage shares because of competition in world markets, which translates into competition among labour located in different countries. “Wage growth is likely to be constrained even as employment increases, not only because reserve labour pools remain large, but also because the potential of MNEs (multi-national enterprises) to shift production to other developing countries can act as a constraint on wage demands," says the report.

UNCTAD points out that these trends in both developed and developing economies together led to a sharp drop in the global wage share in 2002-07, despite a boom.

In fact, UNCTAD goes further and asserts that rising inequality has led to a tendency for under-consumption in the world as a whole and this is the underlying reason both for the lack of investment growth as well as the slowdown in trade.

But how then did global trade continue to grow so strongly till 2007, despite the global wage share being on a steadily declining trend for a long time? Simply put, there were two offsetting factors—massive growth in credit to households on the one hand and asset bubbles on the other.

“The suppression of wage incomes was compensated for by the increase in household debt, enabled by financial deregulation and relatively low interest rates. This generated a debt spiral among households, as well as a boom in asset markets such as housing and stock markets, which in turn had positive effects on consumption and investment. Such credit-driven bubbles are not sustainable and eventually end, often with a hard landing, as in 2008-2009," the report says.

But today, it is difficult to stimulate demand either through households taking on more debt or through higher fiscal deficits. Ultra-loose monetary policy by central banks in the developed nations has led to a global asset bubble, and fanning it further is fraught with risk. For these reasons, UNCTAD believes that trade growth is likely to continue to be sluggish, especially as there are no signs of any serious efforts at reducing inequality. Indeed, the current market bubble has only exacerbated inequality.

This raises two questions. One, what happens to the much-vaunted export-led model of growth that was so successful in East Asia and which every developing country wishes to emulate? And two, wouldn’t trade sluggishness, sooner or later, lead to an upsurge of protectionism, making the problem worse?

Manas Chakravarty looks at trends and issues in the financial markets. Comments are welcome at manas.c@livemint.com