Narendra Modi walks the talk with surgical strikes against Pakistan

Narendra Modi-led NDA government has sent an unambiguous message to Pakistan: it can no longer be business as usual in light of growing cross-border terrorism

The dramatic late night surgical strikes by the Indian army under directions from Prime Minister Narendra Modi-led National Democratic Alliance (NDA) took everyone by surprise: for the simple reason that most believed the NDA didn’t have the stuff to walk the talk.

To be sure, there will be associated costs of India’s actions, but then its calculation is that these are far outweighed by the cost of inaction in the face of growing audacity by Pakistan-sponsored cross-border terrorism. 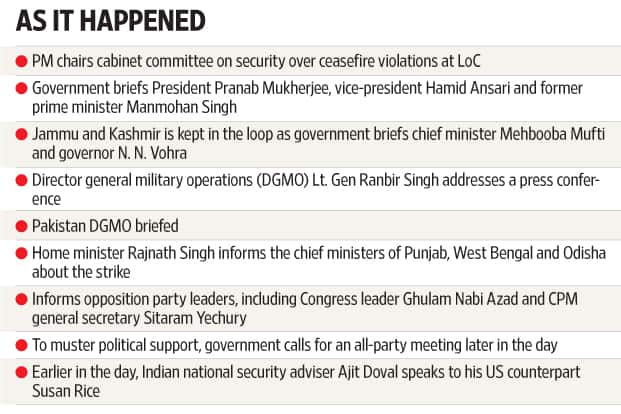 Which is why the morning of 29 September 2016 marks a turning point, with India sending out an unambiguous message: it can no longer be business as usual. There are four reasons for that:

First, it is a paradigm shift in India’s approach to external threats. It is exactly how an advanced, modern nation would respond to such challenges. The singular message is that it can no longer be business as usual; the message is that India is willing to give and take in its international relations and that it can no longer be taken for granted.

Second, the Modi government has demonstrated that nothing is off the table in a negotiation or dialogue. In the build-up to the surgical strikes last night, it unambiguously signalled as much: including its review of a seven-decade-old Indus Water Treaty.

Third, India has demonstrated its willingness to undertake risky manoeuvres, albeit calculated ones. This is a dramatic shift from the past, when India’s response was often defensive; countries like Pakistan and China often interpreted this pacifism for the lack of a stomach for a fight.

Fourth, like it did in Myanmar—when it chased down an outlawed Naga terrorist outfit—it has signalled that India has the right nous for measured but effective retribution. While war as an option is extremely difficult to exercise and entails huge economic and social costs, surgical strikes, though risky, are relatively easier to undertake swiftly.

In the final analysis, it is clear that the Modi government has signalled a change in tack. It will be very difficult to retrace the steps from here. Presumably, it has worked this out in its calculations.