The stewardship of the country’s largest broadcasting network and its only terrestrial TV broadcaster has just been handed over to yet another retiring bureaucrat, largely unnoticed. After all it is an unbroken record, dating back to 1997 when a non-Congress government appointed a former secretary of the ministry of information and broadcasting as the first CEO of the newly notified Prasar Bharati. Several IAS officers followed him in the job, with the most recent incumbent B.S. Lalli, being in the home ministry when he was appointed. He was suspended roughly a year ago.

So why not uphold an illustrious tradition? The new CEO, Jawhar Sircar, picked on Thursday by the vice-president and others, is currently secretary, culture, in the government of India. The more broadcasting flourishes as an industry in this country, the more the government strives to retain public service broadcasting, something that any democracy needs, as a government preserve. 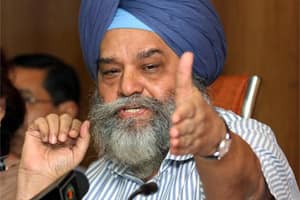 And unsurprisingly in the final pick the other leading contender was a recently retired secretary of the same ministry of information and broadcasting. This is because the CEO’s job was not advertised, though another senior post on the Prasar Bharati board, that of member, personnel, was. The autonomous Prasar Bharati board, with which the CEO is expected to work, figured not at all in choosing the next CEO, nor did it even know, officially, who the candidates were. Yet, it is the board the CEO reports to, not the ministry.

Prasar Bharati exists on a low-visibility, low-accountability plane. Its daily news bulletins do not offend as much as those of private sector new channels do even if you get an overdose of what government leaders are doing. That can seem positively constructive when compared with the daily verbal assaults of performing news anchors on the other channels. Doordarshan occupies so little mindspace that even the opposition parties lose no sleep over it.

Broadcasting is to be judged by its output, not by how well the organization is run, except when the taxpayer is footing the bill, and the government resources are involved. Prasar Bharati, therefore, deserves greater scrutiny. It costs us upwards of ₹ 4 crore a day. The losses incurred by private channels pale in comparison with the figures Prasar Bharati has run up: the revenue projections for 2010-11 were ₹ 1,562 crore against which the revenue receipts were ₹ 969 crore and the expenditure was ₹ 2,506 crore. It manages to lose money even when it telecasts cricket, with the Public Accounts Committee pulling up Prasar Bharati and the information and broadcasting ministry last December on this account.

The Prasar Bharati Act was passed in 1990 ostensibly to give autonomy to the state broadcaster, and was notified in 1997. However, till 2012, the government of India has not been able to bring itself to either transfer financial powers to the corporation it created, nor have the personnel been transferred. On the contrary, employees lobbied for and won in 2010 the right to be treated as government employees with all benefits. In fact, financial powers for the Prasar Bharati board, of up to 50% of its annual budget, have only recently been conceded.

Over the years, the broadcaster’s programming capabilities have been decimated rather than nurtured—there are 1,000-plus vacancies, several hundred programming personnel have not been promoted for two decades or more, ad hoc appointments abound. When there is a vacancy at the top of either Doordarshan or All India Radio, chances are it will go to an IAS officer.

Why such blatant self-serving matters is because at a time of Doordarshan’s digital roll-out on the technological front, one would imagine the government owes it to the country to look for the best in the business to head the behemoth that has a monopoly over all terrestrial spectrum. Recently, the Prasar Bharati board brought on deck the former head of Tata Sky Ltd and the current head of the Indian Institute of Management, Ahmedabad. But as recent experience with Lalli showed, under the current law, the corporation’s CEO does not have to listen to the board he is accountable to.

You could argue, as the government does, that an autonomous broadcaster is no longer desperately needed given how much private sector broadcasting media we are surrounded by. But the current record of commercial broadcasters only underscores the need for public service broadcasting to meet non-commercial communication needs. And should public service equal the government of India, and should the latter’s monopoly over terrestrial broadcasting remain unquestioned despite a Supreme Court judgement (1995) to the contrary?

If the past few years have shown how highly spectrum is valued, does the terrestrial spectrum that Doordarshan and All India Radio have a complete monopoly over not require better stewardship and more accountability? Should recruitment to the top job be so cosy even if it was made by a committee headed by the vice-president of India? And more to the point, if the problems of Prasar Bharati stem from a bad law passed 22 years ago, should that situation be allowed to continue?

Sevanti Ninan is a media critic, author and editor of the media watch website thehoot.org.