India’s literacy rate has increased six times since the end of the British rule—from 12% to 74% in 2011. Yet, India has the world’s largest population of illiterates and, at the current rate of progress, it will take until 2060 for India to achieve universal literacy. Global literacy experts say 70% of Indians are functionally illiterate—that’s twice the official government estimate. 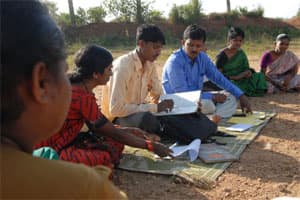 In the last nine years, the Digital Empowerment Foundation has been working in around 10 states, and that includes working at the grass roots, where people live in ghettos, clusters and villages without roads and also in some tribal areas such as Garo Hills in Meghalaya, Ranchi in Jharkhand, and Baran in Rajasthan.

In all the projects that we have been doing using information and communication technology tools such as wireless networks, digital cameras, computers, the Internet, cellphones, projectors, etc., a significant number of adults who were functionally illiterate are now not only confident of being literate functionally, but also digitally literate.

They are involved in designing on computers, setting up wireless networks, teaching computers to peers, doing digital literacy programmes with panchayat (village council) members and women self-help groups. We never worked on these target groups—mostly functionally illiterate—to make them literate, but to enable them for a task that would benefit them in their livelihood.

Based on our experience and belief that inclusion of digital tools through SRCs could boost adult functional literacy, we applied for SRC and also got shortlisted after two levels of due diligence for the Karnataka SRC. We were asked to make a presentation to the selection committee.

I was baffled by the queries put to us: Do you know the methodology of adult literacy? Have you ever implemented the given curriculum of adult literacy? How can illiterates use computers and other digital tools without knowing the alphabets? How can you achieve mass literacy using digital tools? Obviously, the ministry believes it can achieve total literacy through the conventional medium, which will take until 2060. I wonder how in the 21st century we are going to overcome the curse of illiteracy without using digital tools.

Illiteracy is currently defined as inability to communicate in writing or through reading. But that is because before the advent of digital communication as a medium we had to rely on written communication through papers, books, pens, pencils, ink and printing. Now we can easily communicate orally using digital tools such as cellphones, multimedia, the Internet, etc.

One of our Manthan award winners, Eko, provides means of opening bank accounts and does financial transactions through mobiles. This is meant to target those who are illiterate, unbanked and have mobile phones. Illiterate people use devices such as mobiles, telephones, remotes, etc., without going through any formal literacy class. Need has driven them to learn the basics of literacy through acquaintance with modern tools.

We’re illiterate not because we’ve lesser resources, but because of a mental block to using newer technologies. The best way to achieve complete literacy is to adopt the mantra that the medium is the message. The ministry of communication and information technology, along with stakeholders from civil society, telcos, academic institutions and value-added services companies, has started working on mass digital literacy through mobile phones. Content is already being generated, consisting of text, audio, video, animation and so on. This indicates we may have to consider changing the definition of literacy from being based on written communication to the oral medium.

Osama Manzar is founder and director of the Digital Empowerment Foundation and chairman of the Manthan award. He is also a member of the Working Group for Internet Governance Forum at the ministry of communications and information technology. Tweet him @osamamanzar