Home / Opinion / PDS in Bihar: The road ahead
Back
Share Via

PDS in Bihar: The road ahead

In a recent article on the public distribution system (PDS) in Bihar, Chetan Choithani and Bill Pritchard describe the limited impact of one PDS reform in Bihar: the “coupon system" (mintne.ws/1MwkyKA). Indeed, their findings echo our own findings from 2011: one year before the Choithani-Pritchard survey (CP survey), we found that the coupon system had been largely undermined and only half of the grain reached below poverty line (BPL) households.

What is odd about the CP article is that it is written in the present tense. The CP survey was conducted in 2012 and based on a survey of 10 villages in one district. Moreover, their description of the PDS as a “disturbingly unchanging system" is no longer true.

Since the 2012 CP survey, there have been four other surveys (see table): in 2012, the same year as the CP survey, Rohini Somanathan and Anders Kjelsrud visited 2,000 households in 40 villages, and found that people got 80% of their entitlement (purchase-entitlement ratio, or PER). In 2013, in a small survey in two districts, we also found some improvement: people reported a PER of 68%. In the same year, Hemanshu Kumar (of the Delhi School of Economics) surveyed 1,429 households and reported 75% PER. All this evidence on reduced leakages is consistent with our latest survey of 1,000 households in December 2014, where we find people getting 69-79% of their entitlement. 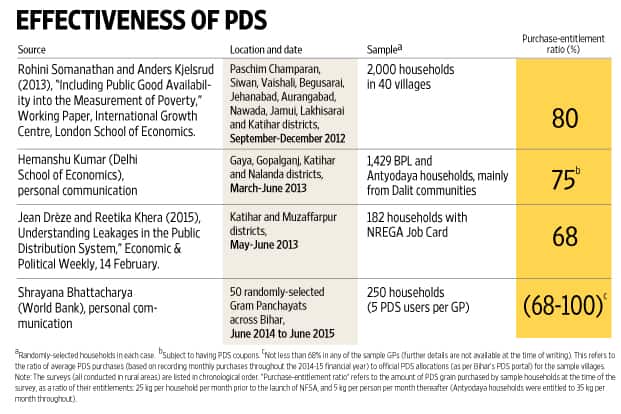 The improvement reported in these small sample studies are consistent with leakage estimates using larger data sets. If we use the National Sample Survey (NSS) data to calculate leakages, we can see that after remaining very high through the 1990s and 2000s, the leakage rate plunged to 20% in the latest round (2011-12). Of course, a leakage rate of 20% is hardly acceptable. Clearly much more needs to be done. What the recent Bihar experience shows is that corruption is a beast that the government is capable of taming—if there is political will.

The first among these is improving supply logistics. Under the National Food Security Act (NFSA), Bihar is lifting 50% more grain than it used to for the PDS. This is a challenging task, and Bihar has only partly risen to the challenge. In our survey of December 2014, households complained of getting two months of grain in one go. Uncertainty and irregularity in supply keeps the door open to corruption. Setting and following a fixed schedule for the delivery and distribution of grain has been an effective reform measure implemented in states such as Chhattisgarh and Odisha.

Second, over the years, we have learnt that awareness of entitlements (prices and quantities) is one of the best weapons against corruption. Much more needs to be done in Bihar on this front. Most importantly, the list of households entitled under NFSA to “Priority" and “Antyodaya" cards needs to be put in the public domain. This is for people to know where they stand and to prevent hoarding of ration cards (if it exists). In our survey, we found that 87% of eligible households had received their ration cards. The remaining 13% did not know whether their card was ready and being hoarded or, whether they had been wrongly excluded. The list of ration cards needs to be put in the public domain (at gram panchayat offices, PDS outlets, online, etc.) immediately.

Finally, it is important to move beyond leakage rates to discuss other issues in the PDS. For too long, public discussion has remained focused on leakages only. We need to raise the bar, going beyond the discussion of leakages. For instance, regularity in supplies is important not only from the point of view of leakages, but also because it is a move towards making the PDS a system that people can rely on, which reduces their anxieties about food supplies.

The quality of grain supplied is another aspect to monitor carefully. Nearly one-fifth (19%) of sample households reported that the quality of rice was poor. The corresponding figure for wheat was 10%.

Having made a big dent in the battle against corruption, it is time to start discussing “second-generation" issues (for example, quality of grain and the regularity of supply) in these programmes.

Reetika Khera is an associate professor at Indian Institute of Technology, Delhi.