Thanks for Visiting Mint
You seem to have an Ad Blocker on. Please turn it off in order to continue, or whitelist Mint
HOW TO TURN OFF AD BLOCKER
OR
REFRESH IF YOU ALREADY TURNED OFF THE AD BLOCKER
Home >Opinion >Online-views >Government spending: Numbers don’t lie

The Modi government's priorities are revealed by what it spends on

The best way to judge what any government really believes in is not to listen to what it says, but to consider instead what it does. And there is no better way of finding out what is close to the Narendra Modi government’s heart than to check what it spends its money on. The provisional estimates of the Union government’s expenditure for 2014-15 are now out, giving us an idea about what the government spent on, compared to what it had promised in its budget. These numbers don’t lie.

Remember Modi’s famous 5 Ts? To build brand India, he had said, he would focus on five Ts—talent, tradition, tourism, trade and technology. At least as far as tourism is concerned, the government isn’t putting its money where its mouth is. It spent only 46% of the budgeted plan expenditure on tourism during the fiscal year.

Recall all the talk about the focus on renewable energy? That turns out to have been mostly hot air, as seen from the mere 53% of the budgeted amount spent during 2014-15 by the ministry of new and renewable energy. Similarly, the Prime Minister has made no secret of his fondness for yoga. But spending by the department of Ayush (ayurveda, yoga and naturopathy, unani, siddha and homoeopathy) has been a mere 43% of the budgeted plan expenditure. Indeed, the ministry of health and family welfare has spent only 76% of the amount it was allowed as plan expenditure under the 2014-15 budget.

Does the government’s heart bleed for the poor and is housing for the masses a priority? The government has often expressed its concern for these matters. But facts on the ground don’t seem to support what it says—spending by the ministry of housing and urban poverty alleviation was a mere 45% of the budgeted amount. Much has been said about the need to raise agricultural productivity and crop yields. But precious little has been done in the Modi government’s first year in office. The department of agricultural research and education has spent just two-thirds of what it was allowed under the budget.

Talking about smart cities is in vogue. But our present un-smart cities don’t get much money. Spending by the ministry of urban development was 60% of the budget. You can’t do much development with cuts of that magnitude. 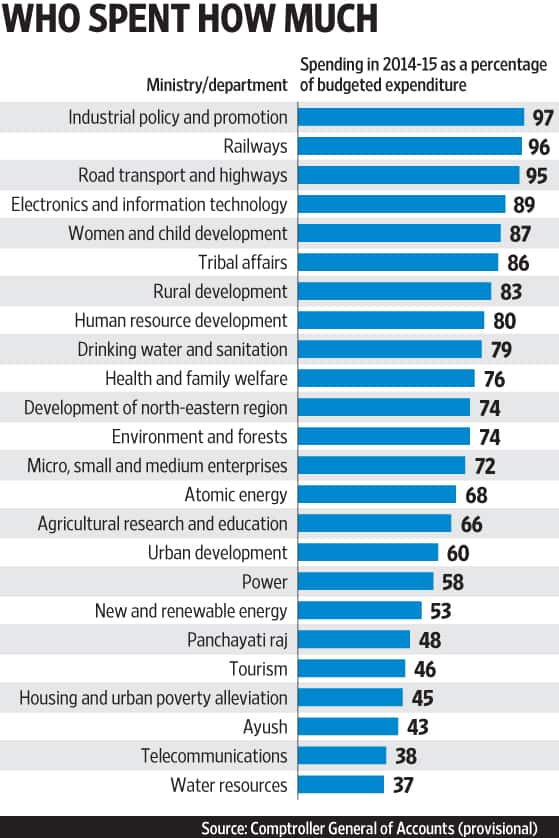 The government has repeatedly said that water will become a pressing issue for the country. Yet the ministry of water resources’ plan spending was a mere 37% of its budget. And for all the tom-tomming about the government’s Clean India campaign, spending by the ministry of drinking water and sanitation was 79% of the budgeted plan expenditure in the last fiscal year.

But what did the government spend on? In one word, infrastructure. The ministry of road transport and highways spent 95% of its budget, and the railways used up 96%. The government’s focus on infrastructure is very clear—this is one sector where its spending record matches its talking record.

Modi is also very serious about the Make in India campaign, seen from the fact that the department of industrial policy and promotion spent 97% of the amount allotted to it in the 2014-15 budget. The Digital India initiative is another pet project, evident from the 89% spent by the department of electronics and information from its budgeted amount. But spending by the department of telecommunications was a mere 38% of its budget allocation.

The details of plan expenditure as a percentage of the budgeted amount, along with those of many other ministries and departments, are given in the accompanying chart. They have been culled from the website of the Comptroller General of Accounts, which has recently put out the provisional estimates of the Union government’s accounts for 2014-15.

The government had slashed spending in the last financial year in a desperate effort to rein in the fiscal deficit and the axe has fallen brutally on plan expenditure. Nevertheless, as the details show, the cutbacks have been far from uniform and the pattern of spending gives one a fair idea of where the government’s priorities lie.