Home >Opinion >When the movie script rewrote the book

When the movie script rewrote the book

When the movie script rewrote the book

Can anybody explain to me just what the hell is going on with the collected works of Robert Ludlum? You remember Ludlum, of course? He’s the guy who churned out those very thick airport best-sellers in the late 1970s and the 1980s.

The books were notable for their titles: each included a proper noun followed by a simple one. Thus we had The Chancellor Manuscript, The Matarese Circle, The Holcroft Covenant and more including, most famously, The Bourne Identity.

I used to read Ludlum in the 1980s. The books were page-turners. He had a certain flair for describing action. And the novels made long-haul flights more bearable. 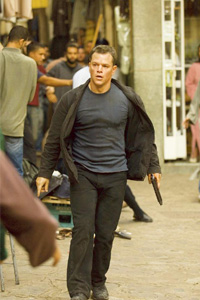 Alias: This Bourne isn’t a character from the book.

But never did I think that Ludlum would be remembered. The basic problem was that all his plots were remarkably similar. It always came down to a shadowy secret group of villains who put our hero (and though the heroes changed with each book, they were all cut from the same cloth) in danger so grave that it took him 500 pages to escape.

And yet, seven years after Ludlum died, the industry lives on. There are faux-Ludlum novels, licensed by his estate, written by such authors as Erik Van Lustbader. There are new editions of the books that Ludlum did actually write himself. Two new movies, one starring Denzel Washington and the other with Leonardo DiCaprio, are under production.

And last month, the Ludlum estate sold the movie rights for the entire catalogue to Universal Pictures for a figure that is officially undisclosed but could work out to hundreds of millions of dollars over the years.

What is going on? How did this master of the chunky airport best-seller turn into such a hot property years after he died?

You probably know the answer.

I remember The Bourne Identity when it first came out. Even Time magazine which, in common with the rest of the media, had been scornful of Ludlum’s output, had to concede that this was a better book than most.

The plot was inventive (by Ludlum standards, at least). A fishing vessel pulls a man out of the water. He is wounded and has lost his memory. All he has is a number tattooed on to his body.

The rest of the novel consisted of the wounded man’s efforts to find out his real identity (hence, the title) and to discover who had shot him. At first, it seems that he is called Jason Bourne. But this turns out to be an alias. He is actually an assassin assigned by the US government to find the terrorist known as Carlos the Jackal.

When the book was written, Carlos was still at large, so we knew that Bourne would not kill him in the end. But it was daring for somebody as firmly rooted in conspiracy fantasy as Ludlum to actually include a real-life character in one of his books. Being Ludlum, he turned this into a bit of a conspiracy as well. It is suggested that Carlos lives in Paris under a secret identity and Bourne tries to work out who he really is.

The Bourne Identity sold well and a few years later, Ludlum broke with precedent to use the character in a second novel. When that was also a best-seller, he wrote a third Bourne novel.

Hollywood had never been as keen on Ludlum as it was on say, Frederick Forsythe so The Bourne Identity did not became a movie. Instead, it became a TV mini-series with Richard Chamberlain (a journeyman actor whose finest moment came in the 1960s as Dr Kildare on TV) which met with some success at the time but which is largely forgotten now (I can’t even find it on DVD).

Then, for decades: nothing. Ludlum collaborated on a TV show and wrote a few more books but it was generally agreed that his moment had passed.

In 2000, I read that The Bourne Identity was being made into a movie. I was intrigued. Why would anybody dredge up that old novel? The world had changed immeasurably in the two decades since the book came out. For one, there was no Carlos any longer. A French undercover team had invaded his West Asian hideaway and captured him. He was now lodged in a Paris jail. And no, he had never had a secret identity and lived undercover as Ludlum had posited.

Then, the movie came out (Ludlum died while it was being filmed) and I was startled by how different it was from the book. Only the basic plot outline (the amnesia) remained and there was no mention of Carlos and there were no secret societies. Even Matt Damon’s Jason Bourne was nothing like the character Ludlum had described. In effect, they had reinvented the whole franchise while keeping its name.

The Bourne Identity did record business and Damon came on board for two more movies (there were three Ludlum Bourne books) though they switched directors to the edgier and more politically left-wing Paul Greengrass.

The second film (The Bourne Supremacy) had nothing to do with the book at all, and nor did the third (The Bourne Ultimatum). The details of Jason Bourne’s life (his wife, for instance, who appears in the books) were completely altered.

But it worked. It may not have been Ludlum’s Jason Bourne up there on the screen but the movie rewrote the rules for screen action. Even the producers of the James Bond series replaced the suave Pierce Brosnan with the edgier Daniel Craig in an effort to be more Bourne-like. It was not lost on them that the three Bourne films made over a billion dollars—much more than the last three Brosnan-Bond movies.

Which brings us back to the Robert Ludlum revival. Given the size of the deal that the estate has struck with Universal, we are going to be bombarded with Ludlum movies over the next few years.

But here’s my question: Will they really be based on the books? Because if they are, they’ll seem dated and flop. On the other hand, if they are completely rewritten (as the Bourne films were), then why bother to buy the books?

I guess we’ll find out.