Explaining the slide in CAD

Since India has conventionally had a current account deficit (CAD), an expected surplus in the first quarter of FY17 generated significant interest. Even though the actual current account (CA) turned out to be in marginal deficit, the unusually low level warrants some explanation. Is this a signal of a slowing economy, belying expectations of green shoots of recovery? Was the lower CAD a one-off event, or are there structural changes in India’s economic activity?

The reason for the interest is that the CA balance is a signal of three, largely interconnected, metrics: (i) aggregate demand, particularly the savings and investment gap (ii) capital flows and the effects on the exchange rate, and (iii) domestic rupee liquidity.

On the first metric, the unusually low CAD was due to an improvement in India’s merchandise deficit with imports having shrunk more than exports. The smaller trade deficit was largely due to lower gold and oil imports, items less reflective of slowing domestic economic activity. True, machinery imports—probably the most accurate reflection of domestic activity—did fall, but this was small. Also, the services trade surplus was lower by about $2 billion, due to payments for business and other services, which are also likely indicators of business activity.

The next big delta is gold imports and gems and jewellery exports. The good news is that we imported less gold in Q1 ($3.9 billion versus $7.5 billion in Q1 FY16), and the bad news is we are reportedly consuming more smuggled gold, which is not captured in data. However, surprisingly, this is not reflecting in market prices, which are trading at a discount to the dollar price of gold.

At the same time, the CA balance was negative rather than the expected surplus, both due to lower than expected remittance flows and the higher service payments indicated above. Remittances are likely to remain modest through FY17 as an outcome of the slowing global economy and low oil prices. This will increase our vulnerability to the overall trade deficit.

What will the CA balance look like for the rest of the year? Demand for gold is likely to remain muted, but other components of CAD are likely to take the deficit up. Software exports are unlikely to rise significantly. A particular concern is that domestic consumption of petroleum products has risen rapidly, which might have an adverse impact should oil prices go up. Consumption is proving to be quite elastic to prices, particularly since pump prices have dropped much less than that of crude. Given reasonable assumptions of a gradual revival of economic activity in India and for commodity prices, the FY17 CAD will be close to -1% of gross domestic product (GDP). This will have implications for the other metrics.

The CA balance is the equivalent of (access to) foreign savings. The chart below shows the tight (almost definitional) link between the CA balance and the gap between domestic investment and savings. A CAD is a sign of a country’s excess demand or dissaving. At its starkest was the episode preceding the effects of the taper tantrum in July 2013. The situation has improved dramatically, beginning with the drop of commodity prices in 2014. However, the scale of investment envisaged over the next few years requires that we tap into the global capital pool. 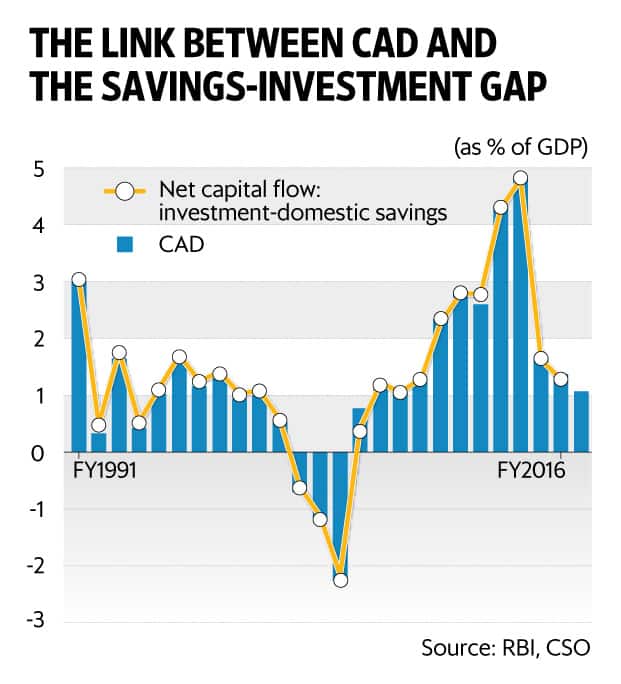 This leads directly to the second impact of the CA balance, on the rupee. Given the limitations on the Reserve Bank of India’s (RBI’s) ability to build up its foreign exchange reserves beyond a point, India will need a CA deficit to absorb the capital flows if the rupee were not to appreciate beyond its “fair value". Hopefully, such a deficit will be driven more by imports of capital goods. The currency is normally an “automatic stabilizer", making imports more expensive and exports more competitive, and thereby regulating the CA balance. This mechanism, however, has broken down in recent years, in large part due to the effects of the quantitative easing (QE) programmes of global central banks, which has distorted risk behaviour.

Finally, foreign currency flows have the most dominant effect on domestic liquidity. Given our current estimate of likely capital inflows, after factoring in an estimated $20 billion outflow due to the foreign currency non-resident (FCNR) deposit redemption, India is likely to get a net balance of payments (BoP) surplus of around $10-15 billion, that is Rs70,000 crore to Rs1 trillion.

This will have implications for the magnitude of RBI’s open market operations (OMOs), needed to maintain durable liquidity at neutral levels. At the upper end of the BoP surplus range, there will only be need for small additional OMOs, which will then serve to push the yield curve slightly up. In summary, the low Q1 FY17 CAD largely does not signal an economic slowdown. However, the lower levels of remittances will amplify the trade deficit. Going forward, the gradual rise in commodity prices and revival of the capex cycle will necessitate a higher CAD.

Saugata Bhattacharya is the chief economist at Axis Bank. These are his personal views.