Indian society functions as a whole. Observed in part, it’s dysfunctional. Let me explain. Without Gujaratis and Rajasthanis, India wouldn’t have an economy. Delete Tata/Birla/Ambani/Mittal/Premji and India begins to look like Bangladesh. The rest ofthe country—Bengal, Bihar, Orissa, Kashmir, UP, etc.—will have lots of culture but little else.

That such a tiny community monopolizes the ability to raise and manage capital is frightening. However, it needs to be understood as part of a whole. There are things missing in Gujarat and Rajasthan as well, whole chunks, without which those states wouldn’t function properly. 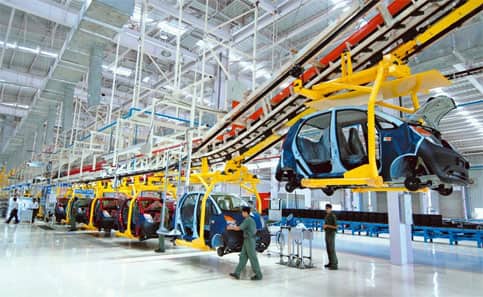 Gujarat also needs another thing, though some might disagree. As a mercantile culture, Gujarati literature is quite poor. The shelves of Crossword stores in Ahmedabad (Surat has none) are lined with volumes of Bengali novels in translation. I wonder how many Gujarati novels have Bengali translations. Probably none, but Gujarat needs the literature of others and I only discovered Camus through his Gujarati translations.

Gujaratis speak no English and though Azim Premji and Ratan Tata run billion-dollar information technology businesses, they are dependent on south Indians to staff their companies. This sort of dependency is everywhere we look in India.

Mumbai’s two dominant communities, Marathi and Gujarati, are incidental to Bollywood. Bollywood is properly the product of Punjab and the high culture (“Ganga-Jamuni") of north India’s Hindustani speakers. Why is this so? Punjab’s peasants have an extroverted physical culture (writer Santosh Desai observed that bhangra was the only Indian dance form which exposed the armpit), which is unusual on the subcontinent. This culture is the basis and the setting for entertainment, and the reason why Bollywood migrates so easily to Pakistan. However, Punjabis and north Indians need the liberal environment that only Mumbai can give for their talents to flower. That’s why Pakistan doesn’t really have a film industry, though there is plenty of talent. Partition hurt Punjabi Muslims, because they are perfect for our film industry.

Why is Pakistan such a mess? Some would blame Islam, but they’d be wrong. The problem isn’t religion at all. The problem is lack of caste balance. There aren’t enough traders to press for restraint and there are too many peasants. Too many people concerned about national honour, and not enough people concerned about national economy. Put simply: Pakistan has too many Punjabis and not enough Gujaratis. The majority of Pakistanis live in Punjab, but well over 50% of government revenue comes from just one city in Sindh: Karachi. Why? That is where the Gujarati is.

Gujaratis are less than 1% of Pakistan’s population, but they dominate its economy because they are from trading communities. Colgate-Palmolive in Pakistan is run by the Lakhani Memons, the Dawood group is run by Memons from Bantva in Saurashtra (the great Abdus Sattar Edhi is also a Memon from Bantva). The Adamjee group, advertisers on BBC, are from Gujarat’s Jetpur village and founded Muslim Commercial Bank. The Khoja businessman Sadruddin Hashwani owns hotels including Islamabad’s bombed-out Marriott. Khojas founded Habib Bank, whose boards are familiar to Indians who watched cricket on television in the 1980s. The Habibs also manufacture Toyota cars through Indus Motors. Pakistan’s only beer is made by Murree Brewery, owned by a Parsi family, the Bhandaras. Also owned by Parsis is Karachi’s Avari Hotels.

People talk of the difference between Karachi and Lahore. I find that the rational view in Pakistani newspapers is put forward by letter-writers from Karachi. Often they have names like Gheewala, a Sunni Vohra name (same caste as Deoband’s rector from Surat, Ghulam Vastanvi), or Parekh, also a Surat name.

Today capital is fleeing Pakistan because of terrorism and poor governance. To convince investors things will get better, the Pakistani government has appointed as minister for investment a Gujarati, Saleem Mandviwalla. The Mandviwallas own Pakistan’s multiplexes, which now show Bollywood. The place where Gujaratis dominate totally, as they do also in India, is Pakistan’s capital market. Going through the list of members of the Karachi Stock Exchange (www.kse.com.pk) this becomes clear. However, few Pakistanis will understand this because as Muslims they have little knowledge of caste.

The Gujarati tries to hold up the Pakistani economy, but the peasant Punjabi (Jat) runs over his effort with his militant stupidity. Why cannot the Pakistani Punjabi also think like a trader? Simple. He’s not converted from the mercantile castes. There are some Khatris, like Najam Sethi, South Asia’s best editor, but they are frustrated because few other Pakistanis think like them. Are they an intellectual minority? Yes, but that is because they are a minority by caste. One great community of Pakistani Punjabi Khatris is called Chinioti. They are excellent at doing business but in a martial society they are the butt of jokes. I once heard Zia Mohyeddin tell a funny story about the cowardice of Chiniotis and I thought of how differently a Gujarati would look at the same story.

Can the individual escape caste? Of course he can. What defines behaviour in this sense is not genes but culture. Baniyas are brought up to seek compromise, to keep emotion in check, to identify value, to understand capital, to persist. This does not come automatically, and it is wrong to believe otherwise.

My teacher, the most learned writer in journalism, is from the Burki tribe of Waziristan. It isn’t the place you would look for intellectuals, but he cannot be defined by his tribe. It takes intellectual effort, however, to distance one’s self from culture and upbringing. This is especially true in a society that is collective. And yet examples of those who defy caste and community are all around us.

There aren’t many Sardarji jokes you can crack about Manmohan Singh, an austere and measured (he would say “meyyered") intellectual. I believe it is not possible to understand India without feeling caste. That’s why I respect the individual who breaks away, and he is everywhere you look. Our army chiefs immediately after independence were drawn from warrior castes. The Coorgs Cariappa and Thimayya, and Saurashtra’s Jadeja (from a warrior caste Gujaratis call “Bapu"). But in a few decades we had Brahmins (Sharma and Joshi) and even traders (Malhotra, Malik and Kapoor). We can learn from each other since we live with each other.

However horrible a place it may be, India is balanced out by all of us: north Indians, south Indians, east Indians and west Indians. We are a unit, and the unit works.