Home / Opinion / The missing economic model?
Back
Share Via

In the run up to the 2014 Lok Sabha election, a debate had emerged around economic growth and poverty, and whether one economic model has done better than others at reducing poverty. Specifically, the emergence of Narendra Modi as the leading prime ministerial candidate, riding on the back of his performance as chief minister of Gujarat over three terms, has made the debate more vocal. His supporters talk of the growth in Gujarat in near-miraculous terms, while his detractors claim the state has always done well, and that in the last decade, it has actually underperformed other states. What do the numbers say? We took a close look at the 68th round of National Sample Survey Office (NSSO) data and found the sharpest poverty reduction in India in the last two decades has occurred in a state that’s in the news for very different reasons—Andhra Pradesh.

Using the Tendulkar methodology, we find the poverty head count ratio in Andhra Pradesh in 1993-94 was 44% of the total population. Drilling further, we find a poverty level of 35.2% in urban areas and 48.1% in rural areas. Fast forward to the 2011-2012 numbers, and we find poverty levels in Andhra Pradesh have dropped to 9.2%, with a rural poverty rate of 10.96% and an urban poverty rate of 5.81%. This implies that the state had a decline of rural poverty of 37.1 percentage points and a decline of 29.3 percentage points in urban poverty and an overall reduction in poverty of 35.4 percentage, which is huge and compares well even with China, where poverty went down by 40.6 percentage points between 1993 and 2008. How does this compare with other major states in India? 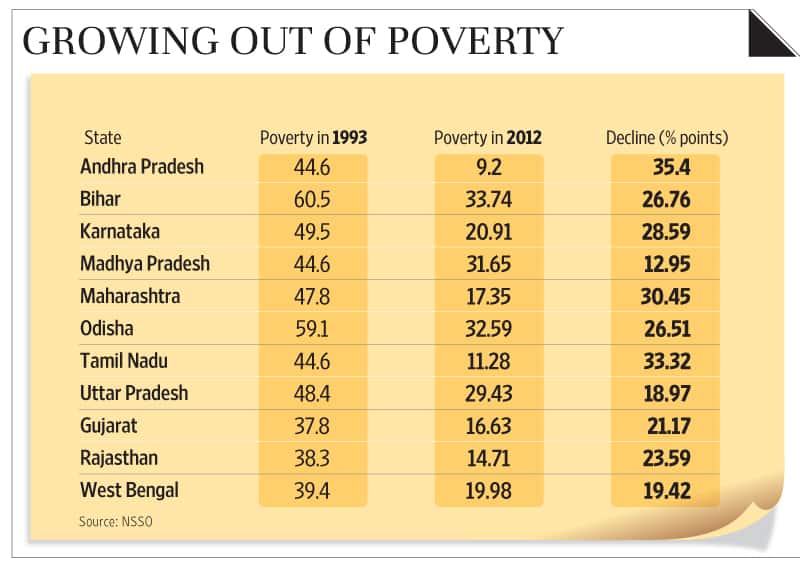 In fact, in 1993, Andhra Pradesh belonged in the same category as Uttar Pradesh and Madhya Pradesh among the worst performing states in the country, and since then has had a dramatic turnaround. There is also no criticism that can be levelled about growth favouring urban areas, since we’ve seen earlier that poverty has come down equally in urban and rural areas. It is important to mention here that Karnataka, Maharashtra and Tamil Nadu have also done well in reducing poverty. In fact, all three states had poverty rates similar to Uttar Pradesh back in 1993 and Karnataka had a poverty rate higher than Uttar Pradesh back then, which most readers will likely find surprising. However we focus on Andhra Pradesh because one of us has done a comprehensive study on factors responsible the decline in poverty in the state.

What caused the turnaround in Andhra Pradesh? We believe it was strong and visionary leadership focused on rapid economic growth, and the credit belongs equally to chief ministers N. Chandrababu Naidu and Y.S. Rajasekhar Reddy. Naidu, who came to power in 1995, believed that investment and growth mattered above all. In fact, Naidu’s vision 20-20 envisioned a new paradigm for government, from being a controller of the economy, to an enabler of its growth. It said, “Economic growth will stimulate development in two ways. First, it will increase incomes for the people by creating employment opportunities. Second, it will generate additional resources for the government. The government will invest these resources mainly in social development, that is, eradicating poverty, improving education and health, promoting rural and urban development, and providing services such as housing, water, power, transportation, and so on."

Reddy, who campaigned in 2004 on a populist platform, turned out to be a savvy operator who did not in fact roll back any of Naidu’s reforms as feared. In fact he strengthened many of them, making the state a top destination for investment. Having understood that redistribution without wealth creation was a non-starter, he focused on rapid growth, the gains of which he partially redistributed through popular social programmes.

Clearly, the Andhra Pradesh story is not one about one political party being superior to another because it depended on two chief ministers with vision, leadership and, most importantly, execution skills. Our hope is that the next prime minister, whoever he may be, will emulate the dramatic success of these two regional leaders, and make ending absolute poverty in a generation a real possibility in India.

Mudit Kapoor is a professor at the Indian School of Business in Hyderabad, and Reuben Abraham is with the IDFC Institute in Mumbai.