The return of India’s super rich

The trajectory of wealth concentration in the country, not just the levels of recently estimated inequality, is important

A flurry of estimates regarding Indian inequality have captured public interest recently. Whether one believes the wealth inequality numbers presented by Credit Suisse or the distributional income accounts by Lucas Chancel and Thomas Piketty, evidence seems to state that India has high economic disparities. But inequality is to be expected in a developing economy with a largely informal labour force, turbulent capital markets and unequal access to education.

In order to fully understand the direction of wealth and income concentration, we need to assess long-run trends and contextualize them with social structures and economic growth. The question is not just the magnitude of inequality but also whether it has increased or decreased. Second, we must not conflate income and wealth inequality. Income disparity represents inequality of flows such as wages and returns to capital and is closely related to employment, mobility and education. Wealth concentration at the top is an entirely different concept that cumulates past prosperity and disparity through inheritance, income and monopoly rents. Piketty and Chancel provide an answer to the former—and despite imperfections in their tax-return based data, these are the best assumptions given the paucity of statistics.

By its very nature, wealth tends to be more concentrated than income. Computing wealth inequality in India is much harder because of the absence of similar tax-return data. Survey-based estimates suffer from top coding and under-reporting issues so that estimates such as those by Jawaharlal Nehru University economists Ishan Anand and Anjana Thampi are an important indicator but non-representative of actual levels of wealth inequality.

In my recent research (Capital And The Hindu Rate Of Growth, 2017), I provide some answers for the trajectory of elite wealth using rich lists, inheritance data and probability models. The key to this is tracing wealth inequality in the nascent stages of India’s development and comparing them to contemporary magnitudes. Due to lack of homogenous data, I instead put the rich into a contextual focus in India’s economic history of the last seven decades. The main question I try to answer is whether the levels of contemporary wealth concentration are part of a continuing pattern or represent a dynamic shift from the post-independence decades of India’s socialist experiment.

After all, for centuries India has been home to extreme poverty and some of the richest people on the planet. In 1937, the nizam of Hyderabad was declared the world’s wealthiest person by Time magazine. His wealth was estimated to be equal to around 30% of India’s gross domestic product (GDP). The prevalent social structures meant that he was joined at the top of the wealth hierarchy by other princes and a handful of industrial tycoons. 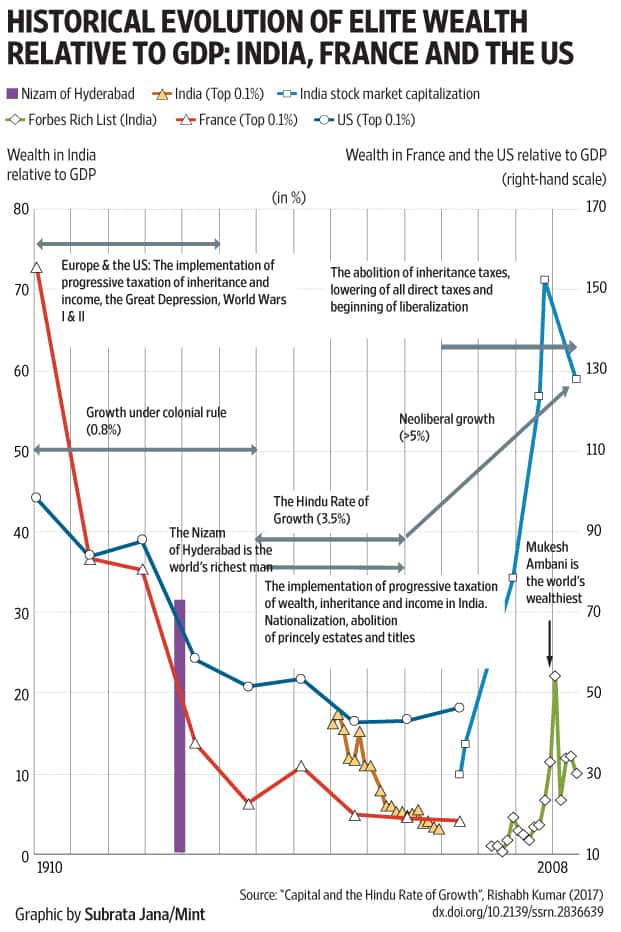 In the aftermath of independence, India faced tremendous pressure for social emancipation. The inherited structures from the colonial era were incompatible with its aims for equity in a new democratic society. Old royal wealth was eliminated through the abolition of princely titles and annexation of private land into national wealth as part of Indian unification. A combination of Nehruvian socialism, Indira Gandhi’s nationalization and hyper-progressive tax policies led to a large decline in the wealth of the elite for the period 1950-80. By my calculations, in 1966, the wealthiest 200,000 families (top 0.1%) had enough wealth to finance 16-17% of India’s GDP. Although this was a dramatic fall from the colonial days, it was better than what followed until the eve of liberalization.

In 1985, the wealthiest 0.1% had a net worth of less than 4-5% of GDP. There was also a change in the social composition of the elite. Old wealth came to be replaced by more dynamic and financially savvy industrial wealth. New wealth is closely linked to economic dynamism. As India began to embrace the market, private capital adapted to more modern investments, and combined with market reforms, it made a select few enormously wealthy. This is why, when rich lists are compared over decades, it is the captains of industry that now dominate the top wealth rankings in India. In 1985, it took thousands of personal estates to constitute wealth equal to even 2-3% of GDP. Between 1996-2000 the (less than 100) members of the Forbes Rich List themselves could reconstitute this fraction. In 2007, the pace of stock market capitalization led Mukesh Ambani, chairman of Reliance Industries Ltd, to become the world’s wealthiest man temporarily. India’s billionaire club could now claim a stock of wealth equivalent to almost 20% of GDP.

Indeed, the events of the last several decades are unique and were a consequence of nation-building after colonial rule. Tools such as taxes on inheritance, wealth and capital transactions were key to the initial decline of the rich and these measures were the first to be diluted or even abolished to set the stage for market reforms.

To be sure, the trends mimic some patterns of wealth inequality observed in the rich world and documented by Piketty in his book Capital In The 21st Century. Namely, India too has been subject to an “Inverted Kuznets Curve"—a long-run, U-shaped trend in wealth concentration. In the industrialized world, on the eve of World War I, wealth inequality was extremely high but the political and economic events of the period 1914-45 led to a sharp decline of top shares until a resurgence in the 1970s that continues to the present.

But what distinguishes India is the pace of decline and resurgence of wealth concentration. The decline of income and wealth inequality between 1950-80 does not imply diffusion of prosperity in India. But the effort to democratize economic resources is an indispensable component of equitable growth. The return of wealth concentration in India and the dominance of the rich threatens supposedly high rates of income (GDP) growth. India could grow its incomes but growth cannot be equitable if the super rich are able to accumulate wealth at even higher rates.