With the release of new malnutrition statistics and the Food Security Bill gaining ground, I am tempted to ask the following question to all those working on the issue including the chairperson of the National Advisory Council (NAC):

“Have you ever spent a day at an anganwadi?"

Anganwadis, or crèches, are the backbone of the Integrated Child Development Services (ICDS) scheme initiated in 1975. ICDS targets infant children and pregnant mothers to tackle the problem of malnutrition, infant and maternal mortality and immunization. And yes, like any other mega social welfare scheme, millions of rupees are doled out every year for fortified grains, oil, fruit, etc., to be made available to poor young children and their mothers. 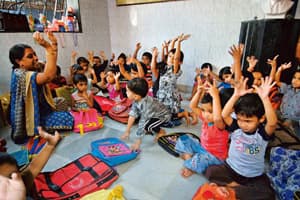 When it comes to paperwork, as a government employee I have seen a lot of files, letters, and registers in offices including my own. But the last place one would expect to see them is in an anganwadi. In the middle of children playing with Unicef branded toys, one finds the “eight registers phenomenon" which every anganwadi is expected to maintain.

1. Survey register: Contains data of young mothers, children, pregnant and adolescent girls in the villages that come under the anganwadi.

2. Attendance register: Daily track of attendance with columns on whether the child came and ate, or came and didn’t eat, or ate and left. The parents sign against their child’s name every day, or once a month.

3. Pregnant mothers’ register: Tracker of all pregnant women in the village and later used to fill immunization records.

4. Weight growth register: A monthly chart to be maintained for every child with colour coding to know if the child has fallen in the “malnourished" category—the red zone.

5. Inventory register: For recording inventory such as gas cylinder, stove, utensils etc. This has to be updated monthly.

6. Premix register: Tracks the premixed food packets given monthly to families against their signatures/thumbprints.

7. Fruits register: To track the fruit consumed every two days a week according to schedule, sometimes the hot meals prepared are also entered here in separate columns.

8. Stock register: Here along with the name and number of the driver whose vehicle delivers the monthly rations—flour and oil, daily consumption quantities, as well the leftover quantity, is entered.

Each register has numerous columns covering every aspect which can be very cumbersome to fill for someone who is just a matriculate as most anganwadi workers are. According to a report in the National Medical Journal of India, female health workers in the state of West Bengal end up spending up to 26% of their time in keeping records and another 10% on meetings. The researchers called for a better data management system to ensure that less time was spent on paperwork. The situation seems no different for anganwadi workers who, if we are to believe the women I interviewed, spend as much as 40% of their time on the registers.

Another pressing issue with anganwadis is similar to what we are facing when it comes to schools—school buildings within a kilometre of every village, but no educational output. According to the department of women and child development, there are 13,56,000 anganwadis in the country. If we check this for average, then there is one for every 1,000 population or even less across the country. We have countered the problem of access, but that is the easier way out where one only needs to invest in infrastructure. Where we have failed is making them function effectively by making the training and tasks of the anganwadi worker more streamlined. I have not even touched upon the contentious issue of how sacks of fortified floor meant for children make their way to the open market.

Gujarat has made some interesting efforts where independence has been given to the local anganwadi worker to buy rations and produce the bill and a lot of packets of precooked food are being distributed, where siphoning off for other usage is less likely. However, a bigger issue is how to deal with children of migrant parents and operating anganwadis in an urban set-up, where most states need to step up with the rising urbanization. As P. Sainath points out in a recent article, the urban population for the first time went up more than the rural population in 2011. Anganwadis need to start upgrading themselves to cater to urban poor—both migrants and the slum dwellers.

One can only hope that the government decides to act this time, not with more laws increasing coverage and giving more rights, but with actual policy change at the grass roots.

Renu Pokhrana works with the education department of the government of Gujarat.