The debate on the Finance Bill 2015-16 is over. But two issues remain and will not go away even with the passage of the bill, which is always a formality. They will continue to be debated and invite attention.

First, undoubtedly the fiscal architecture of the Indian state has been transformed by the decision of the Modi sarkar to accept the recommendations of the Fourteenth Finance Commission to increase the share of states in the single, divisible taxes from 32% to 42%. States have, on this account, more money to spend and in areas they deem to be a priority. Nevertheless, concerns have been raised that the centre’s own allocations for vital national programmes have been reduced. Of course, the reduction may well have been a conscious decision taken in the expectation and assumption that the states will increase their share so as to maintain or even increase the level of public expenditure in the aggregate. Comparisons have been made between the budget allocations in 2014-15 and 2015-16 and on this basis criticism has been made that vital social sector schemes would be adversely hit. The finance minister has responded by saying that this is an unfair comparison and that the revised estimates (RE) in 2014-15 should be compared with the budget estimates (BE) for 2015-16. If such a comparison is done, much of the criticism, the finance minister feels, will turn out to be misplaced.

Now this question of BE to BE comparison or RE to BE comparison is a very old one. Much can be said to support either of the two. Fairness would dictate the former, but then, by the middle of the fiscal year, finance ministers revise the BE keeping in view progress in expenditure and in raising revenue as well. From a policy perspective, the former basis is the right one, but from a practical, operational perspective, the RE-BE comparison is not invalid. The problem in the 2015-16 budget is that even if the RE-BE comparison is adopted, there is room for worry. Here are just four examples where in comparison with the RE for 2014-15, the BE for 2015-16 is either substantially lower or is grossly insufficient to compensate just for inflation: 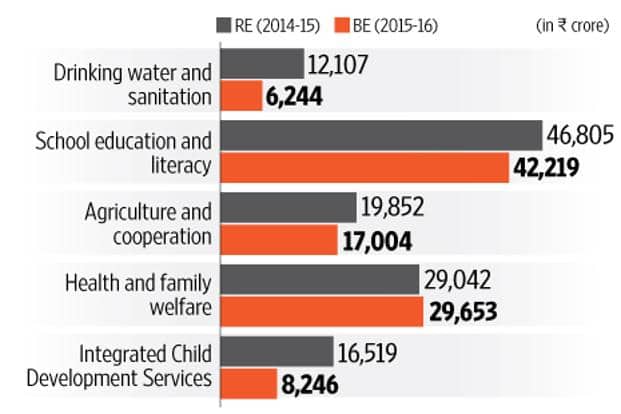 The Prime Minister and the finance minister have argued that these are primarily the responsibilities of the states and they are not wrong. The real question is whether the states are in a position to increase their spending right away and the choices they will be called upon to make. The problem has been compounded by the fact that some initiatives launched by the central government like the Backward Regions Grant Fund, that provided financial assistance to infrastructure development in backward districts, have been completely abolished along with other schemes like, for instance, the one to modernize the police. The share of states in ongoing programmes of the centre is also under review. All told, this means that the states may really not be all that better off as is being claimed.

The deed is, however, done and we can now only hope that the assumptions implicit in the 42% transfer fructify. If they don’t, then we have a serious problem, more so since the centre’s own room to manoeuvre will be circumscribed by the need to provide compensation to states for a period of five years when the goods and services tax (GST) comes into being, which is most likely to be 1 April 2016. The compensation is 100% for the first three years, 75% for the fourth and 50% for the fifth. The situations will get further aggravated if there is need for some fiscal stimulus of the type that the central government had to put in place some seven years ago.

The second issue is the extraordinary situation caused by the finance minister’s recourse to legal gymnastics to push through important amendments to five laws as part of the finance bill itself. His efforts to create a public debt management agency and curtail the powers of the Reserve Bank of India in a surreptitious manner through the finance bill boomeranged and he had to withdraw that proposal. But he had his way on amendments to the five laws: the Securities Contracts (Regulation) Act, 1956, the Forward Contracts (Regulation) Act, 1952, the Foreign Exchange Management Act, 1999, the Prevention of Money Laundering Act, 2002, and the Fiscal Responsibility and Budget Management Act, 2003. This is really riding roughshod over parliamentary institutions like the standing committees. Undoubtedly standing committees can, at times, be needlessly obstructionist.

The best example is provided by the standing committee on finance headed by Yashwant Sinha between 2009 and 2014 that, because of the chairman’s own cussedness, rejected the NIA (National Identification Authority) bill and took over two-and-a-half years to submit its report on the GST bill. P. Chidambaram first introduced the GST bill on 22 March 2011 and this went to Sinha’s committee a week later. The committee’s report was submitted only in August 2013, derailing the government’s plans to introduce GST. But for the most part, standing committees are cooperative and constructive and do submit their reports on time. The amendments to the five laws were no doubt needed to implement the pledges made in the budget speech, but the manner in which they were pushed through is an indication of the shape of things to come when the Bharatiya Janata Party and its allies end up having a majority in the Upper House as well.

The author is a former Union minister and Rajya Sabha MP.