The mystery of the Indian economic recovery

It is a capital mistake to theorize before one has data.

That was what Sherlock Holmes said in A Scandal in Bohemia, the wonderful story of his battle of wits with the lovely Irene Adler. The great detective would have run into problems were he to time travel as an economist to contemporary India. The data available is confusing at best. So, everybody is left with the sort of guess work that Holmes said he detested: “I never guess. It is a shocking habit, destructive to the logical faculty."

Nowhere is this problem more evident than in the ongoing debate about the economic recovery. The official pitch is that the Indian economy is in the first stages of an economic recovery. But there are lots of doubts about this claim. It is not hard to come across businessmen, investors and ordinary citizens who feel less upbeat than what the economists feel they should. What is happening?

The first problem is that there is no official data with which to compare the current economic momentum with what happened a few years ago. It is widely known that the government statisticians have moved to a new method of calculating output—market prices rather than factor costs. There were many debates about how industrial output was measured in the new series.

But what is particularly inexplicable is that previous data was not recalculated. The past is a dark hole. It is not clear how to compare the latest data with what happened a few years ago. The government statisticians should have provided data on gross domestic product (GDP) at market prices using the new method for at least a decade.

Economists were thus stuck with a handful of data points for their statistical analysis. Now some private sector economists have done their own estimates of economic growth going back several years. One example is the estimates provided by Goldman Sachs economist Tushar Poddar. He has recalculated Indian economic growth all the way back to 1991. His reconstruction of our recent economic history using the new data method is shown in the chart. It shows economic growth is indeed recovering, but is perhaps still less than either the boom years of the previous decade or the rapid recovery from the effects of the global economic downturn after 2009. 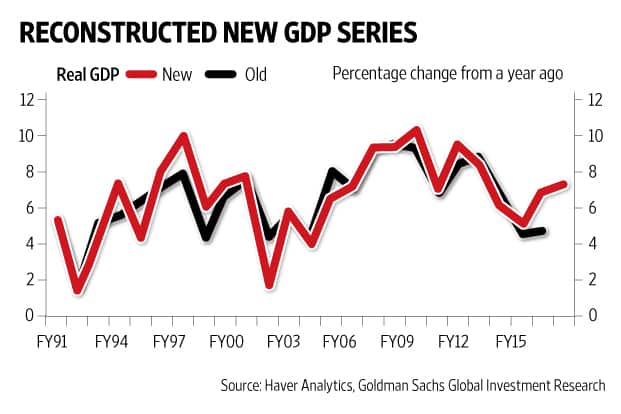 The second problem is there are two measures of economic output that are in the news: gross domestic product and gross value added. What is the difference between them?

The two measures should ideally move in tandem. But that has not happened in India. The latest data for the first quarter of the current fiscal year shows the Indian economy accelerated when one considers GVA but lost momentum when one looks at GDP. That has been a cue for another debate about which measures capture the underlying reality.

One big puzzle is why GDP growth decelerated when indirect taxes have grown at a robust pace in nominal terms during the first quarter while subsidies have decreased. In a succinct explanation to our economics writer, Asit Ranjan Mishra, a few weeks ago, National Statistical Commission chairman Pronob Sen said what matters is how the nominal tax collections are converted into real terms. Net indirect taxes rose 39.9% in nominal terms while they increased only 6.5% in real terms. Sen said that under the international best practices, according to the national accounting rules put forth by the International Monetary Fund (IMF) in 2008, countries should treat an increase in indirect tax collections arising from an increase in the underlying tax base differently from those that come from an increase in tax rates. The latter is considered akin to a rise in prices and, hence, has to be deflated. The increase in tax rates by the government over the past year meant the increase in tax collections was predominantly considered to be a price effect. And that pushed down the GDP growth number even though GVA accelerated. And that is why most economists are focusing on the GVA number rather than the GDP number. It shows that there is indeed an economic recovery underway.

The third problem is that the macro numbers do not fit well with the facts on the ground—bank credit growth is weak, firms have reported yet another quarter of weak profit growth and investment activity is weak.

Take just one of these variables for now: bank credit. The Reserve Bank of India points out that the weak credit growth numbers mask two developments. First, the decline in global oil prices has pulled down the financing that Indian oil marketing companies need. Second, many companies have moved into the private credit markets to raise money through bonds or commercial paper at interest rates that are lower than what the banks are charging right now. So, the credit growth numbers have to be treated with care.

But there is another important issue involved as well. Does bank credit growth lag the economic recovery? HSBC economists Pranjul Bhandari, Prithviraj Srinivas and Stuti Saksena point out in a recent report that credit-less recoveries are becoming more common across the world. They cite an IMF paper that shows how one in five of the 223 recoveries studied are in fact not accompanied by a rise in credit. More generally, one of the big policy lessons of the past decade is that the financial cycle may move at a different rhythm than the business cycle.

Very similar questions can be raised about the revival in the investment cycle and the growth in corporate profits: should we expect them to recover after the macroeconomic recovery? There is no clear answer.

These three issues can be thought about as smoking guns that have created a smokescreen which obfuscates the true state of the Indian economy. It is for the government to clarify these issues if it wants the private sector to believe that the Indian economy is indeed on the recovery path.

And the last word should best be left to Holmes: “You can … never foretell what any one man will do, but you can say with precision what an average number will be up to. Individuals vary, but percentages remain constant. So says the statistician."