The long road to a $20 trillion economy

The Indian economy grew 6.7 times in less than 25 years, and it needs to grow a further nine times to reach the $20-trillion mark

Stretch targets are cursed by hyperbole—but they also sometimes help focus the collective mind of an organization or a country.

Prime Minister Narendra Modi recently asked what needs to be done to make India a $20 trillion economy. It was a question that seemingly had the word “impractical" written all over it. It looked like a stretch target for an economy that is right now barely one-tenth that size. But few seem to realize that India has already pulled off a similar growth trick since the landmark 1991 economic reforms.

India had a $326 billion economy in that year of crisis. It will end 2015 with an annual economic output worth $2.2 trillion, according to estimates published by the International Monetary Fund (IMF) in October. What this means is that the Indian economy grew 6.7 times in less than 25 years. It needs to grow a further nine times to reach the $20-trillion mark.

How many years could that take?

Take a look at the chart. We have calculated how many years India will take to be a $20-trillion economy assuming different growth trajectories from now. Naturally, the pace at which India reaches the mark depends on the rate of economic growth: the two move in tandem. 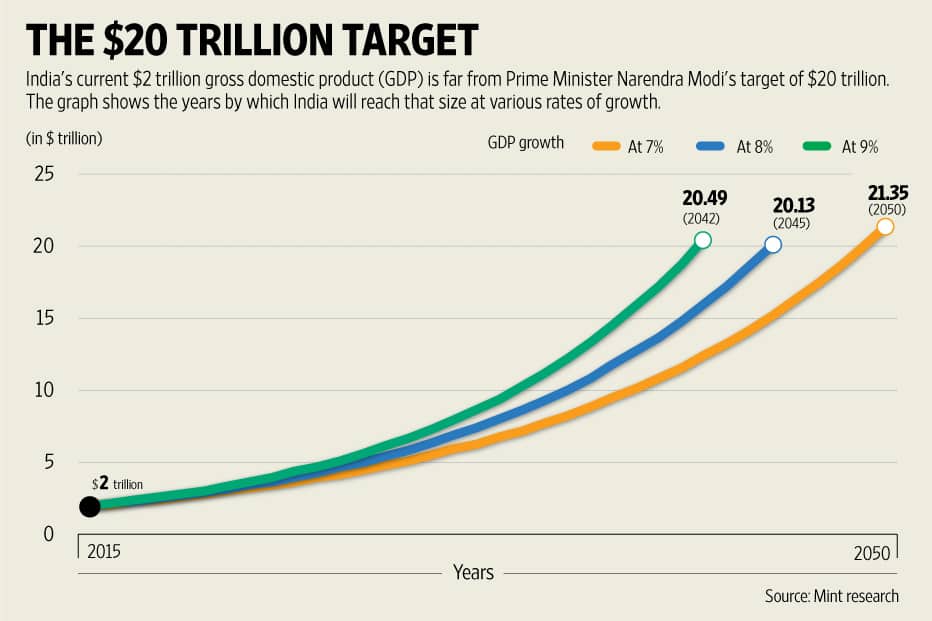 The upshot: India will need anywhere between 27 years and 35 years to become a $20 trillion economy, going by the average growth rates we have assumed.

The income of an average Indian would then be around $14,500, or around the current level of per capita income in countries such as Argentina, Barbados, Latvia or Chile.

There is an important rider, however. We have assumed constant exchange rates. An appreciation in the value of the rupee will help, while a depreciation will delay the progress to the $20-trillion mark.

Even the famous Goldman Sachs report on the economic potential of the Bric countries—Brazil, Russia, India and China—had said that exchange rate appreciation because of higher productivity growth would help these four emerging countries close the gap with the developed countries.

The immediate outlook for the Indian economy seems brighter than that of its peers. Russia is in deep trouble because of the collapse in global oil prices. Brazil is battling stagflation, forcing its central bank to increase interest rates despite shrinking output. China could be in the early stages of a secular slowdown. The toxic combination of high inflation and high unemployment has put South Africa at third spot in a recent Bloomberg listing of the most miserable economies in the world.

Indonesia is perhaps the only large emerging market economy other than India that seems to be headed for better times.

It is well known that India has come a long way since the rupee scare of August 2013. The economic recovery since then has come in three stages.

Then the Modi government began to deal with the policy paralysis that hurt the economy in the final years of the United Progressive Alliance (UPA) regime.

The third stage involves creating a new policy framework in several areas: the structural economic reforms that India needs before it sets off on its next round of growth.

The Indian economy is being supported by welcome global tailwinds, especially the collapse in crude oil prices over the past few months. The economy seems to be in the early stages of a cyclical recovery, even given the doubts about the new data released by government statisticians. Inflation has come down sharply. The current account could be close to balance. Foreign exchange reserves are at a record high. The global capital pouring in is far more than what is needed to fund the current account gap.

One big challenge for the Modi government is to grab this strategic opportunity. Finance minister Arun Jaitley has recently spoken about the need for double-digit growth. So has the Economic Survey released by the finance ministry a day before the budget. Such confidence is welcome as long as it does not convert itself into hubris.

The previous government fell into that trap. Its hubristic view that rapid economic growth was inevitable in effect meant that it failed to pursue structural reforms when the going was good. And the fiscal profligacy after 2009 created economic imbalances that paved the path to the near-crisis of 2013.

India essentially has to replicate the Asian economic success stories of the past few decades: sustained high growth based on the export of manufactured goods (or rapid growth of the tradables sector of the economy).

The preconditions for another three decades of rapid growth are in place: a young population, a high savings rate and the possibility of rapid productivity growth. India also has an opportunity to step up its manufacturing game as China restructures its economy towards domestic consumption. But the task before India is tougher because the global economy is far more sluggish than when the East Asian countries grew on the back of exports, so the domestic market could perhaps be more important in the Indian model.

The upshot: Can India become a $20 trillion economy within a generation? It’s possible.