Just like for the Centre, a shortfall in tax collections can lead to higher fiscal deficit for states as well

All talk about the finances of state governments in recent times has revolved around the 14th Finance Commission and its recommendation that the Centre share a higher proportion of its tax collection with the states. However, taxes collected by the states themselves haven’t been doing well.

In 2015-16, states’ own tax collections missed their targets by around 4%, an analysis of the budgets of the largest 18 states shows. Moreover, data also shows that the buoyancy of states’ own tax revenues has fallen. In other words, the rise in the gross state domestic product (GSDP) yields a lower increase in tax revenues. This is not good news at a time when the Seventh Pay Commission and discom bailout scheme can adversely affect states’ fiscal consolidation path.

For these 18 large states, their own tax collections still contribute to around 40% of total receipts and half of the total revenue receipts. A state’s own tax revenue primarily consists of sales tax, accounting for more than 63% of total taxes in 2015-16. To be sure, the situation will change if and when the goods and services tax (GST) is implemented. Apart from the sales tax, other levies are mostly proceeds from state-level excise duties levied primarily on alcohol and tobacco and taxes on property transactions.

While part of the recent slowdown in tax revenues is owing to low inflation and slowdown in nominal economic output, what cannot be ignored is the fact that states’ tax revenues are lagging even nominal GDP growth, in other words, taxes are becoming less ‘buoyant’. 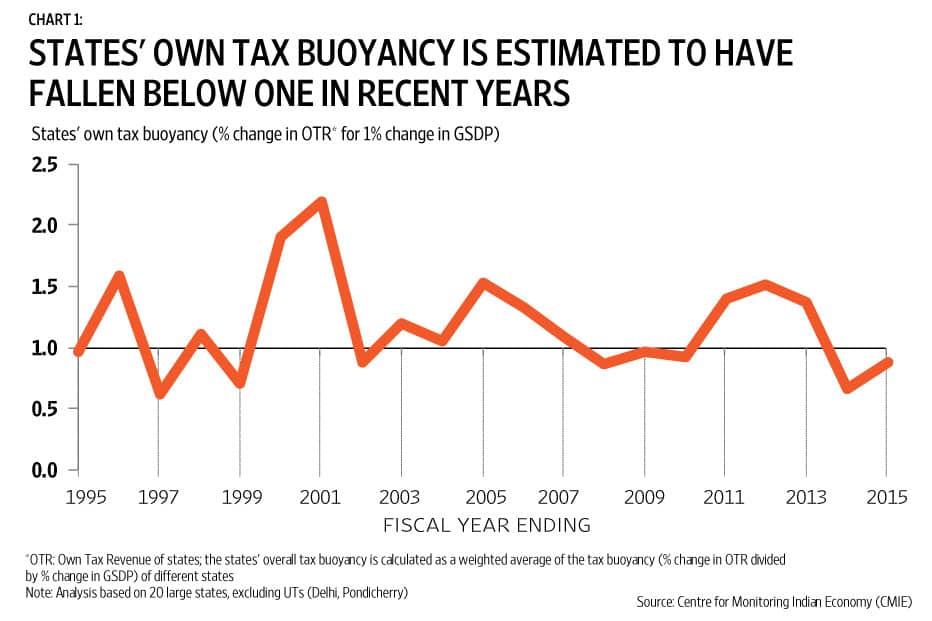 Why is it important?

Just like for the Centre, a shortfall in tax collections can lead to higher fiscal deficit for states as well. A 12 April Nomura report, which analysed the budgets of 16 states, said that the fiscal deficit in those states rose in 2015-16, showing a slippage of 40 bps (basis points) from budgeted levels… “entirely driven by a shortfall in states’ own tax revenue".

Falling buoyancy of revenue collection only adds to problems.

“At an aggregate level, states haven’t made any provision for implementing the Seventh Pay Commission or state level pay commission recommendations," write economists A. Prasanna and Abhishek Upadhyay of ICICI Securities. They also note that only a few of the states have made a provision for higher borrowing and interest costs due to the power sector restructuring under UDAY (Ujwal Discom Assurance Yojana).

Nomura expects that states will find it difficult to meet their fiscal consolidation targets in 2016-17 given these risks along with others such as over-budgeting of their share of tax transfers from the Centre. Consequently, it expects state fiscal deficit to rise to 3.3% of the GSDP in 2016-17, a notch higher than 3.2% in 2015-16.