Research on natural disasters has shown that women suffer more. A United Nations Population Fund (UNFPA) study shows that in a natural disaster, women and children are 14 times more likely to die than men. During the 2004 tsunami in Asia, more than 70% of the dead were women. This is not due to physiological or biological reasons, but cultural norms. For instance, the International Union for Conservation of Nature (IUCN) has noted that in Sri Lanka, men survived the tsunami more easily than women as the latter are usually not taught to swim or climb trees: skills which can prove life-saving when natural disasters strike. Cultural norms which privilege men can also see food and relief material directed more towards men than women.

While research on gender-related mortality during natural disasters is mostly based on events and case studies, a 2007 paper by researchers Eric Neumayer and Thomas Plümper analysed disasters from 141 countries during 1981 to 2002. They found that not only do more women die than men in natural disasters, but that the rate of death of women increases with the severity of the disaster. 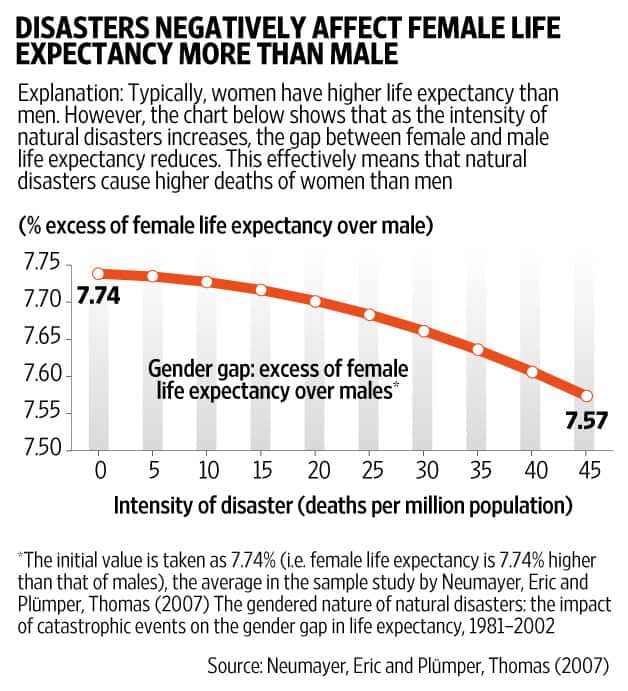 Climate change also leads to droughts and water scarcity. This adversely affects women and young girls as the burden of water collection largely falls on them. This is especially true for India where only about half the households have access to clean water on their premises. Studies in Kenya have shown that finding and fetching water can consume up to 85% of a woman’s daily energy intake. Drought situations can see women spend up to eight hours a day searching for water. Similarly, collecting firewood is also predominantly a woman’s responsibility in many countries. Dwindling forest resources also mean greater hardships for women who have to travel longer distances just for gathering solid fuel sources.

Women and children are more vulnerable to the health effects of climate change. For instance, data for 2000 and 2012 from South-east Asia show that diarrhoeal diseases, which are common during instances of flooding, killed more women than men. In another instance, the Women’s World 2015 report notes that certain effects of climate may affect older women more as they tend to live longer, citing examples of the 2003 heatwave in Europe and Shanghai.

That’s just one part. Women are primary caregivers for families and this responsibility increases during times of emergency and disaster. Women are also more likely to suffer from malnutrition following a disaster as the nutritional needs of pregnant and breastfeeding mothers may be neglected, owing to food hierarchies that favour men.

Across the world, women make up 43% of the agricultural force. However, they often have smaller landholdings and face greater hurdles in accessing farm credit and technical know-how. The Food and Agricultural Organization (FAO) has noted that gender gap exists in agriculture, whereby women farmers’ productivity is hurt due to the challenges women experience in accessing, using, and supervising male farm labour and the fact that women use less fertilizer and of lower quality, among other things. This vulnerability raises the risks women farmers face from climate change.