Influence of education, the need to uplift society and feel-good factor aside, family influence is a key factor of why and how people give

New Delhi: Bill Gates, in an annual letter that he writes with his wife Melinda on their philanthropic ventures, said that he believed in giving because it helped him to do meaningful work and that he has fun doing this work. Melinda, on the other hand, said she and her husband give because they both come from families that believed in leaving the world better than you found it.

The recently released Top of the Pyramid 2017, Kotak Wealth Management report stated that 77% of Indian ultra-high networth individuals (UHNIs) who have inherited their wealth said they want to give back to society as their strength and wealth grows. The report divides UHNIs into three groups: entrepreneurs, professionals and inheritors, and among the three while feel-good factor is the major driver in giving decisions, for entrepreneurs and professionals, upliftment of society is another top motivator.

According to the report, the younger generation of UHNIs is primarily driving a shift in attitude towards giving, with maximum 25- to 50-year-olds considering philanthropy important.

Many of them who have been educated abroad also prefer the Western method of engaging with philanthropy, which calls for strategic giving and direct involvement rather than just monetary help.

Influence of education, the need to uplift society and feel-good factor aside, family influence is a key factor of why and how people give.

Peggy Dulany, a fourth-generation Rockefeller, one of the foremost families in philanthropy in the US, says when philanthropy or social involvement is part of dinner table conversation growing up, the values that are communicated stay with young people.

This, in turn, eventually leads the younger generation to think about strategic giving, which can bring change and impact.

In order to encourage more young people to engage with giving, developing a philanthropy road map as a family is a good way to start. 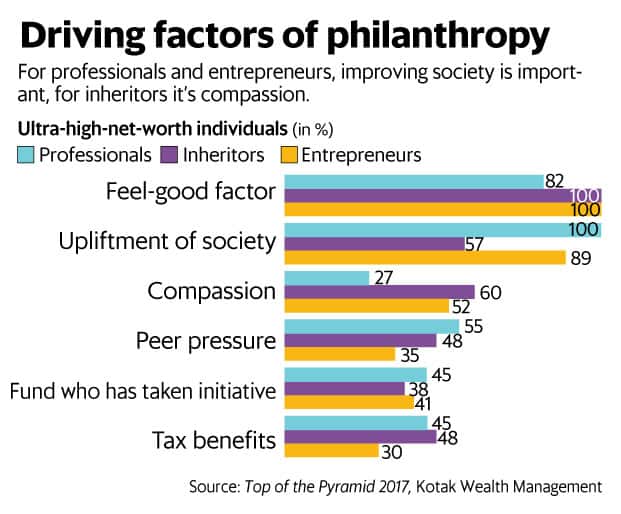 In a handbook on giving as a family, Dasra, a strategic philanthropy organization in association with Rockefeller Philanthropy Advisors and the erstwhile non-profit Sampradaan, lists a few steps that can be applied by any family looking to become a part of a giving cycle.

The idea should be to inform, involve and inspire all family members to view giving as a life choice, to be done in a strategic, consistent way rather than as a one-off or occasional activity.

But it is only when people with monetary power, skills and a drive to make a change think about philanthropy as a strategic life choice that significant dents can be made on the wicked problems of the world.